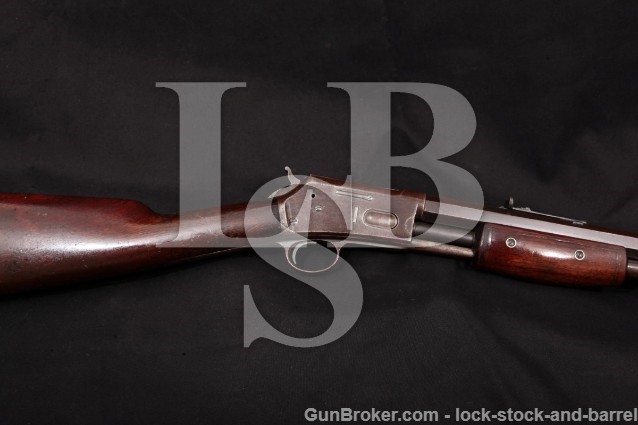 Barrel Length: The octagon barrel is 26” in length with a full-length magazine tube.

Stock Configuration & Condition:  The stocks consist of a two-piece forend and a buttstock with a straight grip and a crescent shaped buttplate. The forend wood is line engraved around the borders. The buttstock wood has a reddish-brown lacquer finish that was unevenly applied, and is dark with oil staining and very dark around the metal parts. There are large scrape marks through the finish on both sides of the buttstock, with a few deep drag lines on the right side. Also, the finish has bubbled on the right side as though it was exposed to excessive heat. There are gouge marks in the top of the wrist around the back edge of the upper tang, abrasions on the left side of the wrist at the receiver, a flat bruise on the right side of the wrist, and several dings. The forend shows oil staining around its upper and rear edges, several small dings and a few drag lines. The LOP is 13 ¼” as measured from the front of the trigger to the back of the buttplate. The buttplate has developed a plum colored patina with scabs of solid erosion, several scratches and a few dings. The buttplate is in about Good condition. The stocks rates in about Good to Very Good condition.

Type of Finish: We think the rifle was originally blued. The surfaces are coated with a thick dark patina making it impossible to determine exactly.

Finish Originality: There are no indications that the rifle was ever refinished.

Bore Condition: The bore is bright, tending to gray in the front half. The rifling shows light to moderate wear. There are spots of moderate erosion in the bore from the muzzle back a few inches.

Overall Condition: This rifle retains about 3% of its metal finish, all of it on sights, which are probably not original to the rifle. The remainder of the surfaces show finish loss with a thick plum colored patina and scattered light erosion, with several spots of solid erosion scattered about. There are several dings and tool marks at the front of the barrel near the rear sight, and several tiny nicks in the edges of the barrel. There are a few light scrape marks through the patina in the magazine tube and a few scratches and small dings in the receiver with tool marks around the upper screw in the left side of the receiver. There are also deep tool marks around the stock screw in the upper tang. The upper tang screw, bolt screw and the upper left receiver screw are disfigured. The markings are clear. Overall, this rifle rates in about Good condition.

Mechanics: The hammer has a half cock notch. The action functions correctly, with a solid slide lockup. We have not fired this gun. As with all used firearms, a thorough cleaning may be necessary to meet your maintenance standards.

Our Assessment: This is a Colt Lightning Medium Frame Slide Action Rifle. Colt chambered this model in the same cartridges used in its 1873 SAA revolver, but since this was a rifle, they didn’t want to use the name Winchester anywhere in the description of the rifle or its ammunition, so they came up with their own “Colt Lightning Magazine Rifle (CLMR)” ammunition. Colt made the Lightning in three frame sizes to cover everything from .22 Short to .38-40 to .50-95. The Lightning rifles saw use as a sporting arm and were also adopted for use by the San Francisco Police Department, but were never as popular or as reliable as the various lever action rifles of the day. This gun was made in 1898 and is chambered in .38-40 WCF with a 26” octagon barrel and full-length magazine tube. This rifle is in about Good condition with no signs it was ever refinished. The action locks up solidly. Colt Lightning rifles are very collectible, and those that haven’t been refinished that are still in working condition are very hard to find. We think the Colt collectors will be very happy to see this going up for auction.