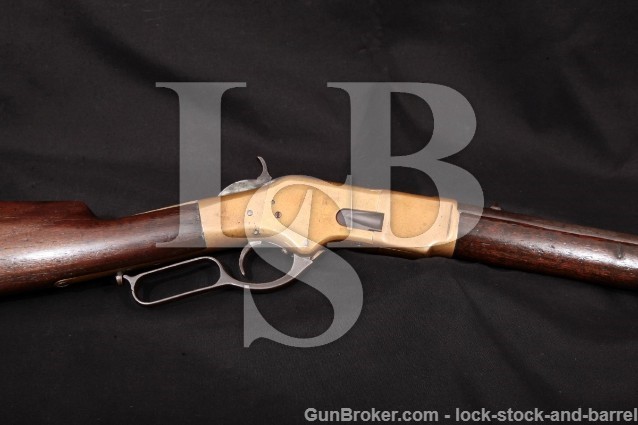 Barrel Length: The round barrel is 20” in length and has a full-length magazine tube.

Sights / Optics: The front sight is short blade fixed to the top of the forward barrel band. The rear sight is “U” notch dovetailed into the barrel.

Stock Configuration & Condition: The stocks are two-piece walnut with a lacquered finish. The buttstock has a straight grip and a brass crescent shaped buttplate with a trapdoor for storage of cleaning equipment in the buttstock. The forend is held with single steel barrel band. There is a chip and a crack at the left and right front edges of the buttstock, a tiny chip missing at the lower left front corner of the buttstock, and a crack in the right side of the comb starting at the back edge of the upper tang. There are also a few surface cracks at the back edge of the buttstock and a sliver of wood missing at the rear top edge of the forend at the receiver. The wood is shy of the metal along the upper tang and at the toe of the buttplate. There are a several dings and drag lines scattered over the surfaces with a few deep bruises and small gouges in the forend. The LOP measures 13 5/16” from the front of the trigger to the back of the buttplate. The buttplate shows light wear at the heel and toe, two deep dings at the heel, several smaller marks, and a mustard colored patina. The buttplate is in about Very Good condition, and the stocks rate in about Fair overall condition.

Type of Finish: The barrel, magazine tube and loading gate appear to have been originally blued. The lever and hammer are case colored and the frame is brass.

Finish Originality: There are no signs the rifle has been refinished.

Bore Condition: The bore is gray, tending to dark at the muzzle. The rifling shows light wear. There are spots of moderate erosion from the muzzle back a few inches.

Overall Condition: This rifle retains about 0% of its metal finish. The barrel, barrel bands and magazine tube show finish loss mottled with plum colored scabs of solid erosion. There are several dings in the barrel bands, the right side of the barrel in front of the rear barrel band and at the rear of the barrel around the rear sight. There are several tiny dings and a few drag lines in the receiver, with a deep bruise, a dark spot of tarnish and abrasions around the saddle ring. The sideplate screws and the screw behind the left sideplate are disfigured. The markings are clear but shallow from handling wear. Overall, this rifle rates in about Fair Plus condition.

Mechanics: The action functions correctly. The hammer has a half-cock safety. We have not fired this rifle. As with all used firearms, a thorough cleaning may be necessary to meet your maintenance standards.

Box, Paperwork & Accessories: There is a thumbscrew in the lower tang for locking the lever closed and a saddle ring on the left rear side of the receiver.

Our Assessment: The Model 1866 rifle was the first firearm to be built by the new Winchester Arms after they changed their name from the New Haven Arms Company in 1866. The Model 1866 was a much-improved version of the Henry rifle, with a loading port on the right side of the receiver featuring a spring-loaded cover, through which cartridges could be fed into a new solid magazine tube that was much stronger than the slotted tube used on the Henry. The M1866 was made in rifle, carbine and musket versions and in four different models dependent on date of manufacture. All of the different models were chambered in .44 Henry Rimfire, with some of the later 4th Models chambered in .44 Henry Centerfire. This rifle is a Model 1866 Saddle Ring Carbine 3rd Model that still has its unaltered rimfire bolt. It has a 20” barrel with full length magazine and a brass receiver. The rifle is in about Fair Plus condition. All of the 1866 models are very collectable due to their age and the relatively short time period over which they were made: the M1866 was made up until the 1890’s, but very few were made after the 1873 rifle was introduced with its improved center fire cartridges. Most Winchester collectors would never think that their collection was complete without at least all three variations of the M1866, while some would argue for all of the variations of the four different models.

The top of the wrist under the top tang is hand-scratched with “818”, not factory stamped. The buttplate is not serial-marked, though the toe has fairly rough texture around the reinforcing web which may obscure an original serial marking. The buttplate screws have beveled heads, a feature not found until serials around 130000.