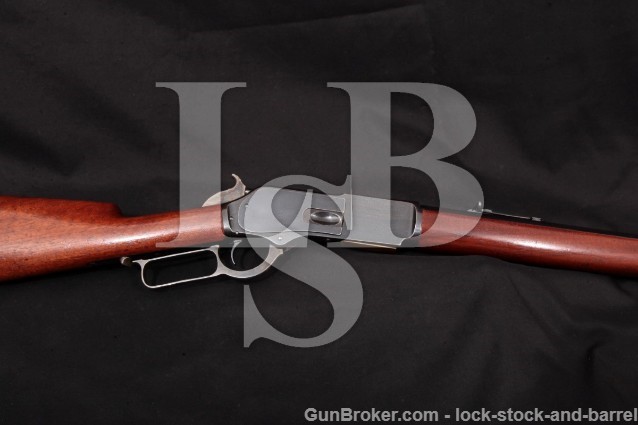 Barrel Length: The round barrel is 28” in length.

Sights / Optics: The front sight is a German silver blade fixed to a blued base which is dovetailed into the top of the barrel. The rear sight is a tiny “U” notched insert in a flat-topped elevator sight that is dovetailed into the barrel. The insert is secured with a set screw, so we suspect it offers a fine adjustment for elevation. The upper tang is drilled, tapped and filled for a tang sight.

Stock Configuration & Condition: The stocks are two-piece smooth walnut with a reddish-brown lacquered finish that shows no appreciable oil staining. The buttstock has a straight grip and a case colored crescent shaped buttplate with a brass trapdoor in the center for storage of cleaning equipment. The forend has a blued nosecap. The wood to metal fit is excellent, there are no cracks or chips noted, and no signs that the wood was refinished. There are several small dings and drag lines scattered over the wood surfaces with a slightly deeper ding in the right side of the forend. The LOP measures 13 ¼” from the front of the trigger to the back of the buttplate. The buttplate shows muted case coloring with minimal wear but with scattered light pitting. The buttplate is in about Very Good condition. The stocks are in about Fine overall condition as Antique.

Type of Finish: The rifle is blued. The hammer and lever are case colored and the carrier is brass.

Bore Condition: The bore bright with sharp rifling. There is no erosion in the bore.

Overall Condition: This rifle retains about 75% of its metal finish. The blued surfaces show scattered pinprick surface erosion. There is finish loss on the front edge of the barrel and the edges of the magazine hangar, and thinning on the edges of the receiver and its sideplates. There are a few small scrape marks in the top of the barrel behind the front sight, and a mark through the finish in the top of the barrel about 4 ½” in front of the forend’s nosecap. There is a drag line in the left sideplate, tiny dings in the bottom of the carrier, and three tiny nicks in the left rear edge of the hammer. The screw heads are sharp and the markings are crisp. Overall, this rifle rates in about Fine condition as Antique.

Mechanics: The action functions correctly with a solid action lockup. The hammer has a half-cock safety and the lever safety is operational. We have not fired this rifle. This very early model rifle was made without a dust cover. As with all used firearms, a thorough cleaning may be necessary to meet your maintenance standards.

Our Assessment: The Winchester Model 1876 was a heavier-framed rifle than the Model 1873, and was the first to be chambered for full-powered centerfire rifle cartridges, as opposed to rimfire cartridges or handgun-sized centerfire rounds. While similar in design to the 1873, the 1876 was actually based on the prototype 1868 lever-action rifle that was never commercially produced by Winchester. It was introduced to celebrate the American Centennial, and earned a reputation as a durable and powerful hunting rifle that was also used by the Canadian North-West Mounted Police and the Texas Rangers. Theodore Roosevelt used one on his early hunting expeditions in the West and one was found in the possession of Apache warrior Geronimo after his surrender in 1886. Unfortunately, the 1876 lost popularity when the Model 1886 was introduced in heavier calibers. This rifle is chambered in .45-75 Win., a shorter, fatter version of the .45-70 cartridge offering slightly better ballistics, but the toggle links limit loading it to its full potential. Still, the cartridge was adequate for elk and moose. This rifle has a 28” round barrel and full-length magazine tube. Neither the stock nor the metal parts have been refinished. This rifle, made in 1876, the first year of production, is in about Fine condition with about 75% of its finish remaining. The bore is bright with sharp rifling and no erosion and the action locks up solidly. The 1876 Winchester was only made for 21 years, with a total of about 63,871 made in rifle, carbine and musket formats, with the result that ALL are collectable, some just more so than others. This 1st year of production rifle, with its original metal and wood finishes, is perfect for the high-end collector who needs a ’76 to put between the ’73 and ’86 that are already in his safe.

A customer viewing the photos asked us to take a second look as they believed the rifle to have been refinished. Upon closer inspection, this customer is correct and this rifle has been professionally restored. Additionally, the striker has excessive play to the bolt, though it is still retained. Due to our oversight, we will not hold any bidder responsible if they do not want this rifle up to 2/4/19 at 4:30pm PST. We apologize for this mistake.