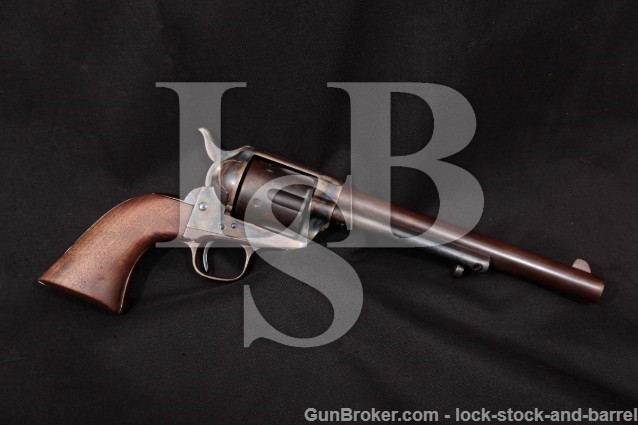 Sights / Optics: The front sight is a quarter rounded blade fixed to the barrel. The rear sight is a “V” notch sitting before a “U” groove milled into the top strap.

Stock Configuration & Condition: The grip is a one-piece smooth walnut with “OWA” in box cartouche on the bottom of the left side. The grip has some small losses and light marring on the edges near the grip straps with only a few other scattered light marks. There are no cracks. The grip is shy to the frame in some areas with a gap at the top of the grip frame on the left side. Overall, the grip is in about Good-Very Good condition as likely not original to the gun.

Bore Condition: The bore is gray. The rifling is well defined where not interrupted by erosion. There is light-moderate erosion scattered through the bore.

Overall Condition: The barrel, cylinder and grip frame have a mottled red-brown coloring as from old cold-blue or bluing applied to a surface which was not properly prepared. The finish in these parts is thinning at edges and shows areas which are lightly worn from handling. There is some light surface oxidation on the barrel under the ejector rod housing and on the inside of the ejector rod housing. The frame has brilliant case-coloring with a few spots showing surface erosion or minor pitting under the finish, most notable on the inside of the topstrap. The screw-heads are mostly sharp with the ejector rod housing screw and one of the grip frame screws slightly disfigured with useable slots. The exposed markings are clear, the frame markings are especially crisp and clear though a hint of the original markings shows through these frame markings. The markings on the barrel under the ejector rod assembly are shallow with soft edges. Overall, this revolver is in Good-plus condition as refinished/restored Antique.

Mechanics: The action functions correctly. The cylinder produces little side-to-side play when locked up, however the stop notches on these early Colts are small and the cylinder can be pushed out of lock with only moderate force on each chamber. The timing is good, the action is smooth and the trigger is crisp. We did not fire this handgun. As with all previously owned firearms, a thorough cleaning may be necessary to meet your maintenance standards.

Our Assessment: The Colt Single Action Army Model of 1873 was an instant success when introduced to the U.S. Army’s Cavalry units which were expanding America’s borders in the years following the American Civil War. This revolver (or parts of it) was made in the first year of production. The gun has been refinished and restored, we suspect some parts have even been replaced and force-matched. The barrel appears original and we find the typeface for the serial marking on the frame appropriate, while the other frame markings are clearly re-marked. The raised edges on the “A” stampings on the cylinder and backstrap are unlikely for a refinished part. The trigger guard assembly’s markings could go either way. Still, when you put the revolver together, you have a representation of a first-year production Ainsworth Cavalry Single Action Army which has been restored with appropriate markings and parts complementing those original to the first year production gun, serial number 2872. For any type of collection, nothing turns heads like a 4-digit SAA. All Single Action Army Colt revolvers are collectible, be it the 1st, 2nd or 3rd generations, just to varying degrees. Few specimens have made it through time in functioning order, especially given the high risk of being damaged or lost in combat. Please see our pictures and good luck!

CA Legal or CA Private Party Transferable: This Antique handgun CAN be transferred as a dealer sale in California. This handgun CANNOT be sold as a Private Party Transfer (PPT) at our Simi Valley shop. All cartridge firing handguns (even C&R’s and antiques) sold to a California resident must be DROS’d. This does not apply to out of state residents.