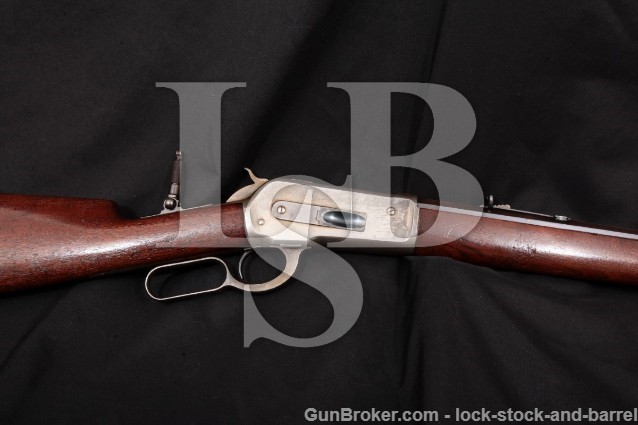 Sights / Optics: The front sight is a white-beaded blade dovetailed to the front of the barrel. The rear sight is a “V”-notch semi-buckhorn leaf and elevator sight dovetailed to the rear of the barrel. The rear sight is a folding peep sight screw-set to the top tang. The bottom of the peep sight is marked “N” and the post, below the adjustment collar, is marked “PAT. JAN. 29/79”. The knurling on the collar is coarse. There is a small, folding aperture inside the larger aperture.

Stock Configuration & Condition: The stocks are two-piece smooth walnut with capped forend, straight grip, straight comb and steel crescent buttplate. The stocks have several scattered light-moderate compressions, bruises, drag lines and scuffs with concentrations  on the bottom-right of the forend just rear of center and along the toe-line. There is a short crack at the front-right corner of the buttplate’s top tang. There are no other chips or cracks. There are some grain lines which appear as cracks, but on close, well-lit inspection, these appear to simply be deep grain lines in old wood. The wood is generally proud to the metal, shy at the toe. The LOP measures 13” from the front of the trigger to the back of the buttplate. The buttplate still shows some figuring fromt its case-coloring on the top tang, mottled with surface oxidation. The rear face of the plate is mostly worn to white with scattered discoloration from oxidation. The heel and toe have wear. Overall, the buttplate is in about Very Good condition as Antique. The stocks are in about Very Good condition as Antique.

Bore Condition: The bore bright and the rifling is sharp. There is some very light erosion in the bore at the muzzle-end.

Overall Condition: This rifle retains about 70% of its metal finish. The finish is thinning at all edges. The barrel has surprisingly strong finish, mottled in some areas by light patina, with scattered light marks, scraping and nicks on the edges, most notable on the top-left edge at the front of the barrel address. The magazine tube also shows strong finish with wear and scattered light marks on the bottom filled with a light patina and a few more moderate impact marks and nicks on the right side behind the lug. The nosecap, receiver, hammer and lever still show some figuring from their case-coloring, moreso on the hammer and lever. The worn areas on the nosecap and receiver appear as described in Madis’ book, “much as if the receiver was nickeled with part of the nickel remaining in spots” and also show a peppering of very small spots of surface oxidation, nicks and scuffs. The lever, hammer and bolt show operational wear. The screw heads are mostly sharp with some lightly tool marked with strong slots. The markings are clear with the serial and caliber markings being the early shallow type. Overall, this rifle rates in about Very Good-Fine condition as Antique.

Our Assessment: Winchester’s first attempt at a lever action rifle capable of handling a rifle cartridge was the Model 1876, which was a heavier framed version of the Model 1873. However, the toggle-link action used in the gun was still limited to short cartridges like the .40-60 and .45-60 Win. The Model 1886 was made to handle longer cartridges like the .45-70 Govt., the .45-90 Win. and .50-110 Win. cartridges. The Model 1886 utilized a locked-bolt action that was much strong than the M1876, and some seem to think it is faster and smoother as well. The Winchester Model 1886 was touted as a lever action express model, capable of handling any of the North American game animals. This rifle is chambered in .45-90 Winchester, and has a 26” octagon barrel. It has been outfitted with a Lyman tang-mounted peep sight. The rifle was made in 1888, and has early features such as shallow caliber and serial markings, patent dates on the tang and not the barrel, and case-colored receiver and trim pieces. The finish appears original with a large portion remaining. It is in about Very Good-Fine overall condition as Antique, and the bore is mostly bright with sharp rifling and only some very faint erosion near the muzzle. This rifle has seen some honest wear, but the action still functions and the bore is still great. The collectors should be very interested in this rifle. Please see our photos and good luck!