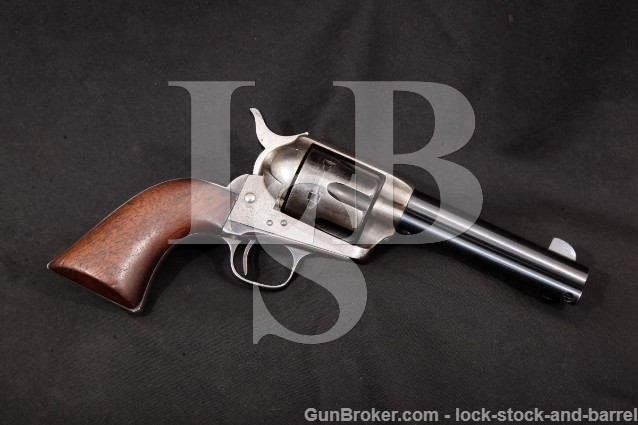 Sights / Optics:This revolver is mounted with a “V” groove in the top strap for a rear sight. The front sight is a quarter-round blade fixed to the top of the barrel.

Stock Configuration & Condition: The grip is a one-piece smooth walnut that shows some oil staining at the receiver. There is a deep bruise with a sharp ding in the center towards the bottom on the left side and a large but shallow bruise towards the top on the left side. There are several dings and drag lines scattered over both sides of the grip. The grip is in about Very Good overall condition.

Type of Finish:The revolver is blued with a case colored frame.

Finish Originality:The finishes appear to be original, but none of the parts are original to the frame.

Bore Condition: The bore is bright with sharp rifling. There are a few tiny spots of light erosion in the front 2” of the bore.

Mechanics: The cylinder lockup shows a barely perceptible amount of play. The trigger pull is crisp. The hammer has 1/4 and 1/2 cock safety notches. The action functions correctly. We have not fired this revolver. As with all used firearms, a thorough cleaning may be necessary to meet your maintenance standards.

Our Assessment: The Colt SAA revolver served the U.S. Army throughout the Indian Wars and into the 20th Century with the Spanish-American and Philippine-American Wars., with the M1873 Colts being brought back into service after the stopping power of the .38 Colt chambered M1892 revolvers was found inadequate. One thing is for certain and that is there was never a question of stopping power when it came to the .45 Colt cartridge. Many of the original SAA revolvers had seen a lot of use, and others (like those issued to the 7th Cavalry under Custer) were lost or destroyed. When it came time to re-arm troops in the Philippines with SAA revolvers, older revolvers had to be refurbished before they could be issued. Revolvers were cannibalized and when the guns were refurbished, few had matching numbers. This revolver was made in 1874, the 2nd year of production, and has parts with different serial numbers and inspection marks from various date ranges, with the barrel a much newer addition. The revolver is in about Very Good condition with about 45% of its finish remaining. The bore is bright with sharp rifling and a few tiny spots of light erosion. The action functions correctly with just a hint of play in the cylinder lockup. All 1st Generation Colt SAA revolvers are heavily collected, and those made in the 2nd year of production are a rarity. With the exception of the barrel and perhaps the hammer, the remaining parts are typical of arsenal refurbishment done in the early 1900’s, and should not detract from the collectability of the revolver.

CA Legal or CA Private Party Transferable: This Antique single action revolver CAN be transferred/sold in California. All cartridge firing handguns (even C&R’s and antiques) sold to a California resident must be DROS’d. This does not apply to out of state residents.