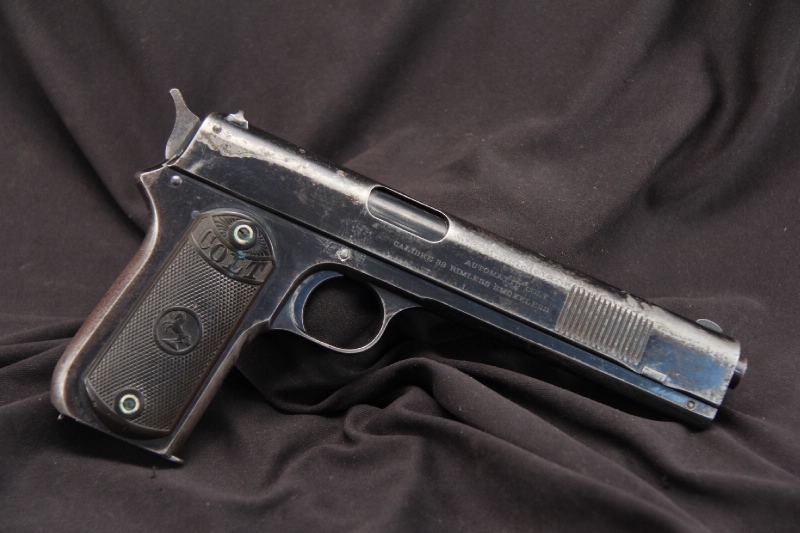 Sights / Optics: The pistol is mounted with a dovetail set rear notch and a fixed front blade.

Stock Configuration & Condition: The grips are original two piece hard rubber. The grips have browned and the checkering has begun to smooth. The panels are free of splits and cracks, showing only surface marking and dings. The grips rate in about Very Good overall condition.

Bore Condition: The bore is gray, with bright patches and the rifling is present the entire length, with wear. There is mild erosion in the grooves, but no severe pitting.

Overall Condition: This pistol retains about 60% of its metal finish. There is much more finish on the right side of the pistol than the left. The left shows a general loss with scattered erosion. The pistol was apparently stored on a damp cloth, this side down. There is scattered thinning at areas of frequent contact and frosting throughout. The right side of the slide, along the rail, shows what looks like chemical loss. The pin holes show some bruising from being set. There is some erosion at the frame edges, especially on the right side at the trigger. The right side of this pistol shows far more finish that would be normally expected. The Screw heads are sharp and rarely turned. The markings are crisp, though a bit difficult to read on the left side. While difficult, all markings are visible. Overall, this pistol rates in about Very Good condition.

Our Assessment: The Sporting Model 1902 Colt automatic is practically the second automatic ever produced by Colt. These guns are in our opinion the most important series of guns ever produced. It is here where you can see the evolution of the industry from manual repeating arms to automatic arms. The father of modern firearms, John Browning, invented this series, produced by the most American of companies: Colt. With prototypes dating back as early as 1884 and the first produced by Colt in 1900, this is only the second model of the Browning Automatic ever made available by Colt. The 3rd was the 1903, 4th 1905, 5th 1907, 6th 1908, 7th 1909 and 9th the Model 1910. The culmination of this evolution was the greatest gun ever produced – the Model 1911. This gun is an early Model 1902, with matching serial numbered slide and plenty of finish.