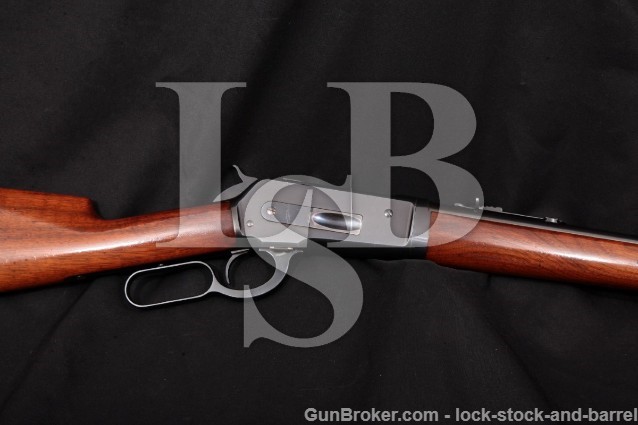 Stock Configuration & Condition: The stocks are two-piece smooth walnut with capped forend, straight grip, straight comb and checkered black hard rubber Winchester Repeating Arms Co. shotgun-style buttplate. The stocks have several scattered light compressions, drag lines and scuffs with a few more notable compressions scattered in the forend. There are no chips or cracks. The LOP measures 13 1/8″ from the front of the trigger to the back of the buttplate. The plate has very light wear at the heel and toe with well defined checkering and lettering, in about Fine-plus condition. Overall, the stocks are in about Very Good-plus condition.

Overall Condition: The rifle retains approximately 89% of its current metal finish. The barrel has a few patches of very light freckling which has been scrubbed out and a few other scattered light marks. The exposed portion of the magazine tube has thinning at edges and there is operational wear concealed when the tube is installed. The receiver has light thinning at most edges with finish wear along the top-left and front-left edges, scattered light marks, moreso on the left side, and a couple of marks through the finish on the top tang. The lever and bolt show operational wear and there are spots of light discoloration from oxidation on the tops of the unfinished locking lugs, visible on the top of the action when closed. The mainspring strain screw will not thread in flush with the bottom tang and a small divot has been cut on the bottom of the lever to allow clearance for the screw head. This divot is finished over. The screw heads are generally sharp with some showing light tool marks with strong slots. Screw heads show very light-moderate finish loss. The hammer knurling is well defined. The markings are generally clear though some are shallow and some parts of the barrel address and tang patent dates are faint. Overall, this rifle is in about Very Good condition as refinished.

Mechanics: The action functions correctly and smoothly. The trigger is crisp. The lever locks up tight. The hammer has a half-cock position. We did not fire this rifle. As with all used firearms, a thorough cleaning may be necessary to meet your maintenance standards.

Our Assessment: The 1886 is another of John Browning’s industry-changing designs. It is our favorite Winchester here, certainly the strongest built at the time and function leads to beauty. The 1886 was available in a variety of cartridges over its nearly 40 years of production and, while there were standard configurations, there were also special-order features which led to a wide number of variations avialble to the collector today. This rifle is a Takedown Extra Lightweight, which allows the user to quickly remove the barrel assembly from the receiver for transport in a case the length of the barrel and has a 22″ rapid-taper round barrel, allowing for the rifle to be lighter-weight than other 1886 configurations of the same caliber (this rifle weighs in at about 7 1/4 lbs.). The rifle has been refinished and retains approximately 89% of this finish with a great bore and strong mechanics. The barrel markings are something of a mystery as “207689” is more than 47,000 numbers past the highest 1886 serial number and we are unaware of barrel compatibility with any other models. With matching assembly numbers on the bolt, tang and barrel extension, it appears to have most of its original parts and the barrel may be original with the numerical marking an inventory/batch number or some other marking. Altogether, this is a beautiful example of a Winchester 1886 takedown in a caliber which can still be readily found today, making this a great rifle for the collector, the shooter, and especially for the collector who likes to shoot. Please see our pictures and good luck!

Finish Originality: The receiver’s finish is original. This gun was sent back to Winchester for some reason where the barrel was re-finished and re-proofed. We believe that the barrel is the only part refinished due to some light markings, but the proof mark is factory sharp.