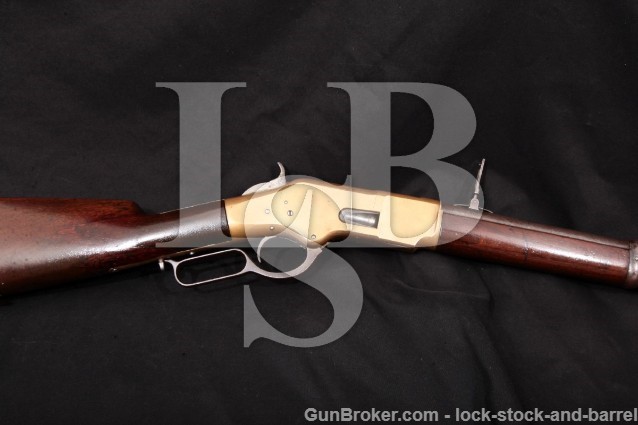 Barrel Length: The round barrel is 27” in length and has a nearly full-length magazine tube.

Stock Configuration & Condition: The stocks are two-piece walnut with a lacquered finish. The buttstock has a straight grip and a brass carbine style buttplate. There is a trapdoor in the buttplate for storage of cleaning equipment in the buttstock. The forend runs to within about 9” of the muzzle and is secured with two barrel bands. There is a sling swivel at the bottom of the front forend barrel band and another inlet into the belly of the buttstock. The wood is dark with oil staining in the wrist, around the metal parts, and at the front of the forend. There is a gap between the metal and the wood at the back edge of the upper tang and along the left and rear edges of the lower tang. The wood is shy of the metal at the toe. There are two hairline cracks near the right rear corner of the lower tang, a repaired hairline crack at the front of the buttstock on the left side and a repaired chip and crack at the front of the comb on the right side. There are several dings and gouges in the belly and the underside of the forend, and the underside of the front section of the rifle is abraded. There are several more dings and drag lines scattered over the remainder of the forend and buttstock. The LOP measures 13 ½” from the front of the trigger to the back of the buttplate. The buttplate shows light wear at the heel and toe and a few dings and drag lines. The buttplate has developed a mustard colored patina and is in about Very Good overall condition. The stocks rate in about Good overall condition.

Type of Finish: The barrel, magazine tube and loading gate are blued and the receiver is brass. The hammer and trigger appear to be case colored, but we can’t tell of the lever is case colored or blued.

Finish Originality: There are no signs the rifle has been refinished.

Bore Condition: The bore is mostly bright, tending to gray in the front half. The rifling shows moderate to heavy wear. There are spots of moderate erosion from the muzzle back a few inches.

Overall Condition: This rifle retains about 5% of its metal finish. The barrel, barrel bands and the underside of the lever show finish loss with a mottled dark colored patina and the sides and top of the lever have developed a solid dark colored patina. The receiver has developed a mustard colored patina. There is light erosion at the front of the barrel with several spots of light erosion scattered over the barrel and magazine tube, with spots of solid erosion on the barrel bands. There are several light handling marks in the barrel and magazine tube, and several tiny dings and drag lines in the receiver, with tool marks around its screw heads. The hammer knurling shows heavy wear on its back edge. The upper tang screw and right sideplate screw are disfigured and there are light screwdriver marks in the remainder. The markings are clear. Overall, this rifle rates in about Very Good condition as Antique.

Mechanics: The action functions correctly and the hammer has a half-cock safety. We have not fired this rifle. As with all used firearms, a thorough cleaning may be necessary to meet your maintenance standards.

Box, Paperwork & Accessories: The front barrel band has a bayonet lug for a saber bayonet on its right side.

Our Assessment: The Model 1866 rifle was the first firearm to be built by the new Winchester Arms after they changed their name from the New Haven Arms Company in 1866. The Model 1866 was a much-improved version of the Henry rifle, with a loading port on the right side of the receiver featuring a spring-loaded cover, through which cartridges could be fed into a new solid magazine tube that was much stronger than the slotted tube used on the Henry. The M1866 was made in rifle, carbine and musket versions and in four different models dependent on date of manufacture. All of the different models were chambered in .44 Henry Rimfire, with some of the later 4th Models chambered in .44 Henry Centerfire. This rifle is a rare Model 1866 Musket equipped with a forward barrel band incorporating a saber bayonet lug. The rifle still has its original rimfire bolt. It has a 27” round barrel with a nearly full-length magazine and a brass receiver. The rifle is in about Very Good condition. The bore is mostly bright, tending to gray in the front half, with moderate to heavy wear in the rifling and spots of moderate erosion near the muzzle. All of the 1866 models are very collectable due to their age and the relatively short time period over which they were made: the M1866 was made up until the 1890’s, but very few were made after the 1873 rifle was introduced with its improved center fire cartridges. Most Winchester collectors would never think that their collection was complete without at least all three variations of the M1866, while some would argue for all the variations of the four different models. The condition of this rifle is nice enough that we expect the high value collectors to be interested, especially with its rimfire bolt and rare saber bayonet lugged barrel band. Please see our pictures and good luck in your bidding.

The buttplate is numbered on the inside at the toe “8183” matching the last four digits of the serial number. The top of the wrist, under the top tang is marked “818” and with an incomplete or worn mark, likely also “8183” indicating that the stock and plate are original to the gun. When we removed the stock to check for the serial number, we found that there is damage not described. There is a crack which starts at the stock mounting hole in the top of the wrist, extending back to the visible repair described at the right-front of the comb, but then continues back and down approximately 2” before turning forward and down, terminating at the middle of the bottom tang. The crack has been quite expertly repaired and was not visible until we put it under some bright LED lights to inspect the incomplete marking on the top of the wrist. We are sorry we missed this.