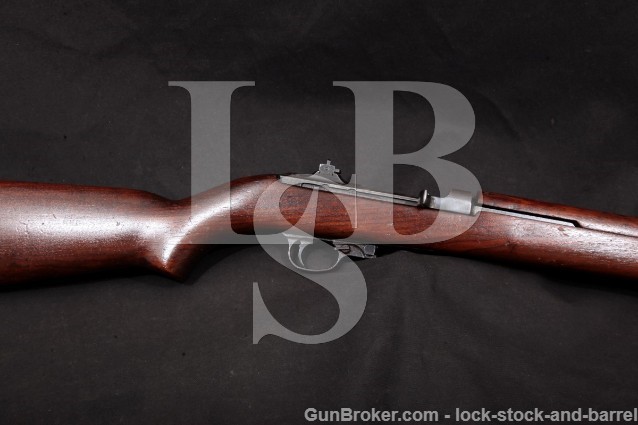 Sights / Optics: The front sight is a post set between two protective wings. The rear sight is Type I flip up, dual aperture assembly.

Stock Configuration & Condition: The stock has a pistol grip, metal barrel band with sling loop, sling well, sling pass through and a metal buttplate. The refinished buttplate has small scratches, small dents and a few spots of surface erosion showing through the finish. The top of the grip shows a small hairline crack at the recoil plate. The wood shows numerous scrapes, scratches and compression marks which have been oiled over. Many have damaged small portions of the finish or surface wood. The LOP measures 13 1/4 inches from the front of the trigger to the back of the buttplate. The stock rates in about Very Good Plus overall condition.

Overall Condition: This rifle retains about 97% of its metal finish. The barrel shows scrapes. The right side of the receiver shows thinning consistent with cycling. The metal shows other light scrapes & handling marks. The screw heads are intact. The markings are deep. Overall, this rifle rates in about Very Good Plus to Fine condition.

Box, Paperwork & Accessories: None. Please note, this rifle does not come with a magazine.

The following information is taken from bavarianm1carbines website:
“Allied Control Council Directive #16 on 10 Oct 1945 had allowed the occupation governments in each of the four occupation zones to arm the city police with pistols, the “rural” police and new “frontier” police with carbines. The Control Council directed that the weapons be marked in a manner that identified the police agency, but did not specify the manner in which this should be done. Within the American Occupation Zone, how this would be accomplished was left to each military governor and their staff. OMGUS Bavaria ordered the weapons to be marked with the type of agency, in English, as opposed to the name of a city, Statdtkreis, or Landkreis. Thus the markings “Bavaria Rural Police”, “Bavaria Municipal Police”, Bavaria Border Police”, etc. Bavaria was the only jurisdiction in West Germany that used these names on their weapons. For the M1 carbines, OMGB ordered Bavaria to place these markings on the top of the receiver to the left of the bolt…

The only M1 Carbines known to have been marked by the Austrians are those that were issued to the Gendarmerie. The overwhelming majority of the M1 carbines were assigned to the Gendarmerie in the lands (province) where they had the largest contingent of forces, which was Lower Austria…
All markings were placed on the M1 carbines after Austria’s declaration of independence and the departure of the occupation troops, who left in mid 1955. Likely these M1 carbines were used by the Austrians 1952-1955, but no markings were placed on them prior to independence. In the case of Lower Austria and Burgenland, both were controlled by the Russians until mid 1955, so no M1 carbines were used there until after the Russians left… Gendarmerie markings were uniform nationwide, as were where they placed the markings on the M1 carbines. As previously discussed, the M1 carbines that served with the Austrian Gendarmerie had the last 4 digits of the receiver serial number stamped on the underside of the handguard, inside the stock’s sling well, along the slide rail, in the T on the back of the trigger housing, and electro-penciled into the top of the bolt.”