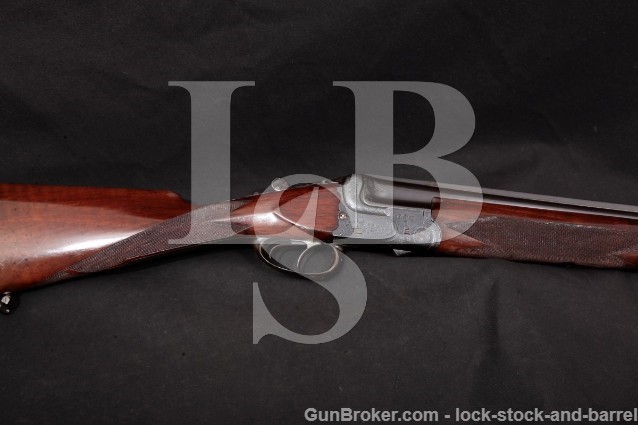 Sights / Optics: This shotgun is mounted with a white bead front sight and a small mid rib bead.

Stock Configuration & Condition: The stocks are hand checkered walnut. The stock is of straight English style. There is a tiny chip missing from the stock at the left side of the receiver on the top and a thin crack below this. There are compression and handling marks throughout the buttstock and forend. There are some compression marks on the checkering of the forend on the left. There are several scattered light compressions, scratches, scuffs and drag-lines, most notably on the right of the buttstock. The belly of the buttstock has a sling swivel mount. There is another sling swivel on the bottom barrel forward of the forend. The LOP measures 14” and 13″ from the fronts of the triggers to the back of the horn buttplate. The drop at comb measures 1 ½”. The drop at heel measures “2 ¼”. The cast is just slightly cast off. The plate has light wear throughout with more moderate wear at the toe, in about Good condition. The stocks are in about Good-Very Good condition.

Finish Originality: The receiver’s finish appears original. We suspect that the barrels were Refinished.

Bore Condition: The bores are bright. There is light erosion in the bore at the fronts of the chambers. There is a dent in the bottom barrel visible in the bore.

Overall Condition: This shotgun retains about 87% of its metal finish. The finish is lightly thinning at most edges. The balance of the finish shows Light pinprick surface erosion and some scattered light marks on the barrels. There is a dent on the left of the bottom barrel just behind the sling swivel which is visible in the bore. There is surface erosion on the breech-face. There are a few scattered compression marks on the edges of the rib. The screw heads are mostly sharp, a few show light tool marks with strong slots. The barrel markings are soft with some illegible, the receiver markings are clear. Overall, this shotgun rates in about Good-Very Good condition.

Mechanics: The action functions correctly including ejectors. The barrels lock up with no play to the receiver. We have not fired this shotgun. As with all used firearms, a thorough cleaning may be necessary to meet your maintenance standards.

Our Assessment: Otto Geyger was a well respected name in its time, but today is not well known in part because the records were destroyed by bombing during the war. Some O. Geygers are absolutely superb sidelock guns; the equivalent of a Purdy or Holland and Holland. O. Geyger amongst other things was a supplier of guns to German royalty. This particular over under has exemplary hand scroll engraving and checkering of the stocks. The gun has premium features including selective ejectors, dual barrel extensions for the Greener crossbolt, fine hand checkered English stock and sculpted receiver. There are even cocking indicators on the sides of the receiver. The trigger guard and bottom tang are made of one piece of horn. The buttplate is also of horn. The underside of the barrel is marked “S&S” which is an indication of Sauer & Sohn manufacture on the tubes. This is truly a luxury German over under from the heyday of fine European firearms. Please see our photos and good luck!