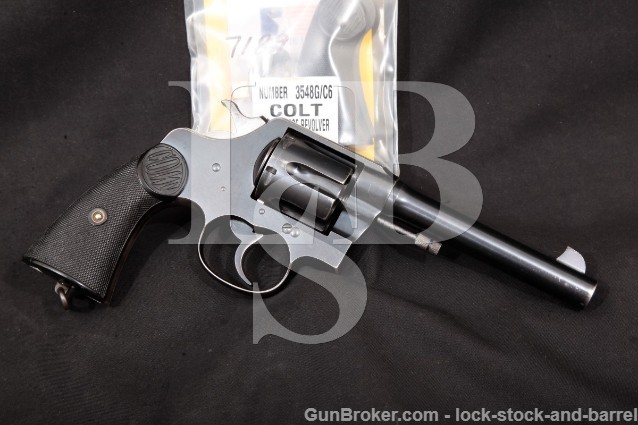 Stock Configuration & Condition: The grips are checkered black hard rubber with a circled “COLT” at the top of each grip. The smooth borders of the grips show several tiny nicks and the rear corner of the right grip has been broken off and repaired (there is still a chip missing from the bottom of the grip). The checkering shows light wear with a tiny mar below the grip screw in the left grip. The grips rate in about Good condition.

Included is a set of Triple K replacement black plastic grips which show only a few scattered light marks, in about Fine condition as not original to the revolver. Also included is a Tyler T-Grip which shows little to no wear, in Fine-Excellent condition.

Overall Condition: This handgun retains about 75% of its metal finish. There is thinning on the edges of the barrel, frame and cylinder, as well as on the backstrap and front strap. There are tiny nicks scattered over the barrel with light scratches on the sides of the frame and deeper scratches around the cylinder latch on the left side of the frame. There is thinning, tiny dings and scratches along the top strap, and tiny nicks in the trigger guard, front strap and backstrap. There are tiny spots of surface frosting scattered over the left side of the frame with a small spot of pinprick surface erosion behind the cylinder latch. The cylinder shows a light drag line, a few light scratches and a sharp compression mark in the edge of one of the flutes. The bottom of the grip shows thinning and small dings. The knurling on the hammer and cylinder latch shows light wear while the ejector rod knurling is sharp. The grip screw is sharp and the markings are clear. Overall, this handgun rates in about Very Good condition.

Mechanics: The action functions correctly. The cylinder lockup is SOLID on all 6 chambers. The single action trigger pull is crisp and the double action is smooth. We did not fire this handgun. As with all used firearms, a thorough cleaning may be necessary to meet your maintenance standards.

Box, Paperwork & Accessories: A lanyard ring is present on the bottom of the grip frame. The extra grip and Tyler T-Grip are included as described.

Our Assessment: The New Service revolver entered production in 1897 and was the first Colt double action revolver with a cylinder rotation to the right. The New Service was available in various calibers, but when the Army decided to adopt it in 1909, they were looking for a man-stopper to replace their New DA Army revolvers that gained such a poor reputation in the Spanish American and Philippine-American wars. The result was the .45 Colt chambered Model 1909. After the Army switched to the Model 1911 semi-auto, they wanted revolvers in the same caliber for WWI, and the Model 1917 New Service was adopted, chambered in .45 A.C.P. This New Service revolver is identical to the Model 1909 and has markings showing it was issued to the Canadian “Royal Northwest Mounted Police”. It was manufactured in 1917 during WWI and is in about Very Good condition with 75% of its finish remaining. There are thinning in the edges of the barrel, cylinder and frame, with thinning along the top strap, trigger guard, front strap and backstrap. There are tiny nicks in the barrel, top strap, backstrap and front strap, with a sharp nick in the edge of one of the cylinder flutes. The sides of the frame, the top strap and the trigger guard show light scratches. The grips are checkered black hard rubber with Colt logos at the tops. The checkering shows light wear with a tiny mar in the left grip, but the bottom rear corner of the right grip has been broken off and repaired, and there is still a chip missing from the bottom of the grip. The bore is bright with sharp rifling and the cylinder lockup is Solid on all 6 chambers. It is obvious from the nice bore and solid action that this revolver hasn’t been fired very much. We don’t often see cylinder lockups this good on revolvers that are new in the box, let alone on those that are almost 100 years old. This revolver may gather some interest from collectors of WWI weaponry, especially those interested in arms used by the Canadians. If the collectors don’t show enough interest, it will make someone a great revolver for home defense and for informal target practice. The .45 Colt has plenty of knockdown power and the open sights offer quicker sight acquisition than on more modern target models. Please see our photos and good luck!