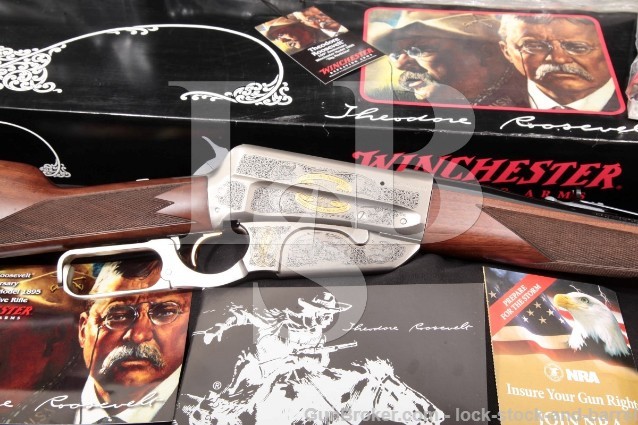 Make: Made by Miroku of Japan and Imported by Browning Arms for Winchester

Serial Number: TR150H0180 (This is No. 180 of 1000 TR Commemorative Individual High Grade Rifles made. There were also 250 sets of High Grade and Custom Grade rifles made with matching serial numbers.)

Markings: The left side of the barrel is marked “WINCHESTER MODEL 1895 Theodor Roosevelt High Grade – Caliber 405 Win. ONLY” and at the receiver with an oval “WP” proof. The right side of the barrel is marked “Made by Miroku-Japan – Imported by BACO, Inc. – Morgan, Utah / Winchester is a registered trademark of Olin Corporation”. The upper tang is marked “WINCHESTER / MODEL1895”. The right front upper shoulder of the receiver is marked “TR150H0180”. The sides of the receiver are scroll engraved and with animal scenes with “THEODORE ROOSEVELT / FATHER OF CONSERVATION” in gold banners with “1858-2008 / 150 / YEARS” in the center. The left side of the magazine is engraved with a sheep and a bear, and the right side with bison and a mule deer. The left front of the trigger guard is engraved in gold with a bust of Teddy Roosevelt and on the right side with him standing. The top of the barrel is engraved in gold with Theodore Roosevelt’s signature. The barrel has a label stuck to it marked “WINCHESTER” and “Ask your dealer for a catalog / or visit Winchester.com”.  The right side of the buttstock has a gold-plated medallion engraved with a bust of Theodore Roosevelt and his signature.

Barrel Length: The round barrel is about 24” in length.

Stock Configuration & Condition: The stocks are checkered Grade II/III fancy walnut with a satin finish. The forend has a Schnabel tip and the buttstock has a blued steel flat buttplate. There are a few very light handling marks in the buttstock. The checkering is sharp and without mars. The LOP measures 13 5/16” from the front of the trigger to the back of the buttplate. The buttplate is unmarked and in Excellent condition. The stocks rate in about Excellent condition.

Type of Finish: The barrel and hammer are blued, the trigger is gold plated, and the receiver, its tangs and the lever have a gray nitride finish.

Bore Condition: The bore is right, with sharp rifling and no erosion. The bore looks like this rifle might have been fired outside the factory, but if it was, it certainly wasn’t fired very many times. There is the faintest of primer pocket marks on the bolt face, which could easily have come from a factory test round.

Overall Condition: This rifle retains about 99+% of its original metal finish. We did not see any handling marks in the metal surfaces. The hammer knurling is sharp. The screw heads are sharp and the markings are crisp. Overall, this rifle rates in about Near Mint condition.

Mechanics: The action functions correctly. The rifle has a rebounding hammer and a sliding button safety on the upper tang. The trigger pull is crisp. We have not fired this rifle. As with all used firearms, a thorough cleaning may be necessary to meet your maintenance standards.

Box, Paperwork & Accessories: This rifle comes with its factory box, paperwork and an unused cable lock. The box is white cardboard and has a black cardboard sleeve and a white Styrofoam liner. The sleeve is marked with a picture of Teddy Roosevelt and his signature and the front panel is marked “WINCHESTER / REPEATING ARMS”. The sleeve has a ¼” long tear at one corner and there is an oblong hole punched through the bottom surface of the sleeve and into the cardboard box. The sleeve is in about Fine condition. There is a label on one end panel of the box marked with the correct make, model, caliber and serial number of this rifle. The box and its Styrofoam liner show minimal wear but there is a hole in the bottom surface of the box and two tears in the lid of the liner. The box is in about Fine condition. The paperwork consists of a NRA application, a request to register your rifle online, a Firearm’s Safety brochure, an original Owner’s Manual and a colored brochure on the Theodore Roosevelt 150th Anniversary Model1895 Commemorative Rifle. All are Excellent condition.

Our Assessment: The 1895 Winchester was the first model to incorporate a non-detachable box magazine. Teddy Roosevelt called this model, chambered in .405 WCF, his “Medicine Gun for Lions” (from his book “African Game Trails”). The M1895 rifle became the preference of major powers worldwide, with Russia alone purchasing nearly 300,000 1895’s just before World War I. The Model 1895 was designed for the new generation of cartridges utilizing smokeless powder and pointed bullets, and many of its original chamberings remain popular today. With its quick handling characteristics, box magazine and pointed bullet capability, the Model 1895 changed the world of sporting rifles forever. Teddy Roosevelt was famous for his charge up San Juan Hill during the Spanish-American War (he was awarded a Medal of Honor for his heroism in 2001), his tenure as President and his conservation beliefs in founding the National Forest Service and starting five National Parks, 150 National Forests and various game preserves. This Model 1895 rifle, chambered in .405 Win., commemorates the 150th Anniversary of his birth, from 1858 to 2008. This is the High Grade model with a Grade II/III checkered walnut stock, nitride finished receiver, blued barrel and gold-plated trigger, with engraving on the receiver and magazine, his signature on the barrel and a gold-plated medallion in the stock. This rifle is really gorgeous, so please see our pictures. There were only 1000 High Grade models made. The rifle is in about Near Mint condition with a bright, sharp bore that shows telltale signs of having been fired outside the factory, but if it was it certainly wasn’t very many times. The rifle still has a label affixed to its barrel. The rifle comes with its factory box and all of its factory paperwork, as well as a cable lock. This will make a beautiful addition to any collection of lever action rifles.