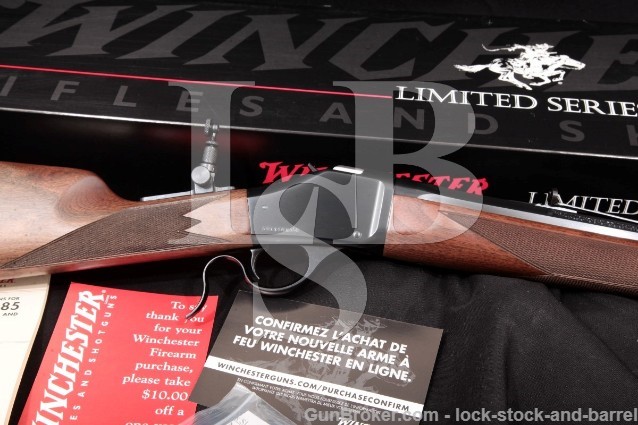 Make: Made by Miroku of Japan for Browning Arms. Browning owns Winchester Repeating Arms and licensed the use of the Winchester trademark from the Olin Corporation.

Model: 1885 High Wall Traditional Hunter – Davidsons Limited Edition (According to https://www.assra.com/cgi-bin/yabb/YaBB.pl?num=1224134570, Davidsons & Winchester worked out a deal to manufacture 126 rifles of each caliber/model per year, but after only a few years, manufacturing ceased due to lack of interest.)

Barrel Length: The barrel is a slightly tapered octagon that is 28” in length and measures 0.780” flat-flat at the muzzle. The barrel has a recessed target crown.

Sights / Optics: The front sight is a brass bead dovetailed into the top of the barrel. The rear sight is a “U” notched semi-buckhorn elevator sight that is dovetailed into the barrel. The top of the barrel and receiver are drilled, tapped and filled for scope mounts. There is a folding aperture sight mounted on the upper tang. The sight is click adjustable for windage and elevation and has a screw-in aperture with an OD of 0.50”.

Stock Configuration & Condition: The stocks are two-piece checkered walnut with a satin finish. The buttstock has a straight grip and a blue steel crescent shaped buttplate. The forend has a Schnabel tip. There are sling swivel studs mounted in the belly and in the underside of the forend near the tip. There are no handling marks in the wood that we could find. The checkering is sharp and without mars. The LOP measures 13 ½” from the front of the trigger to the back of the buttplate. The buttplate shows no marks. The buttplate and the stocks are in Excellent condition.

Type of Finish: The rifle has a polished blue finish. The breechblock is “In The White”.

Overall Condition: This rifle retains about 99+% of its metal finish. There are no marks in the metal surfaces that we could find. The screw heads are sharp and the markings are crisp. The hammer knurling is also sharp. This rates in about Mint condition.

Mechanics: The action works correctly. The hammer has a half-cock position. The hammer is somewhat stiff. The trigger is adjustable for pull weight, and as currently set breaks crisply at 3 lbs. 7 ozs. The lever locks-up solidly. We have not fired this rifle. As with all used firearms, a thorough cleaning may be necessary to meet your maintenance standards.

Box, Paperwork & Accessories: This rifle comes with its factory box, factory paperwork and an unused padlock. The box is brown cardboard with a white Styrofoam liner fitted for this rifle. The box has a black cardboard sleeve marked “WINCHESTER / LIMITED SERIES”. One end panel of the box is marked with the correct make, model, caliber and serial number of this rifle. The box shows minimal wear and is in Excellent condition. The paperwork consists of an Instruction Manual, an application to the NRA, a “Firearms Safety depends on YOU” brochure and a note to confirm your purchase online.

Our Assessment: This is a Model 1885 High Wall Traditional Hunter falling block single shot rifle chambered in .405 Winchester. It was made by Miroku of Japan for Browning Arms Corp., which owns Winchester Repeating Arms. The rifle was made as part of a deal made with Davidsons to produce and distribute a Limited Series of M1885 rifles in Creedmoor and Traditional Hunter models in various calibers. There would be a limited run of supposedly only 126 of each model/caliber per year. One source indicates that only one or two years of production were made of the Creedmoor models due to limited interest. It is not known how many of the Traditional Hunter rifles were made, but there couldn’t have been that many, and this rifle has SN 00114. The rifle has a 28” octagon barrel with iron sights and a tang mounted aperture sight adjustable for windage and elevation, as well as being drilled, tapped and filled for scope mounts. The trigger is adjustable for trigger pull. The stocks are checkered walnut with a satin finish. This is a beautiful looking rifle without a handling mark in either metal or wood, so please see our pictures! This rifle is in about Mint condition, and appears unfired since it left the factory. It comes with its original factory box, an unused padlock and its factory paperwork. When they were first manufactured, the John Browning designed Model 1885 rifles were deemed stronger than the prior Sharps rifles, and the different sight and trigger options available made them an instant hit with hunters and target shooters alike. From Wikipedia: The Model 1885 rifles were targeted at competitors in “Match Shooting”, a sport which was extremely popular from about 1871 to 1917. The Winchester rifles challenged the Sharps, Remington, Maynard and Ballard rifles, and quickly became known for their reliability and accuracy. Major Ned Roberts, inventor of the .257 Roberts cartridge, described the Model 1885 as “the most reliable, strongest and altogether best single shot rifle ever produced””. This rifle should be a big hit with the Winchester collectors out there. It isn’t very often you get a chance at a truly limited series – not one of 10,000 like many limited editions, but very possibly one of a few hundred.

CA Legal or CA Private Party Transferable: This rifle can be sold/transferred in California.

For more information go to https://www.p65warnings.ca.gov