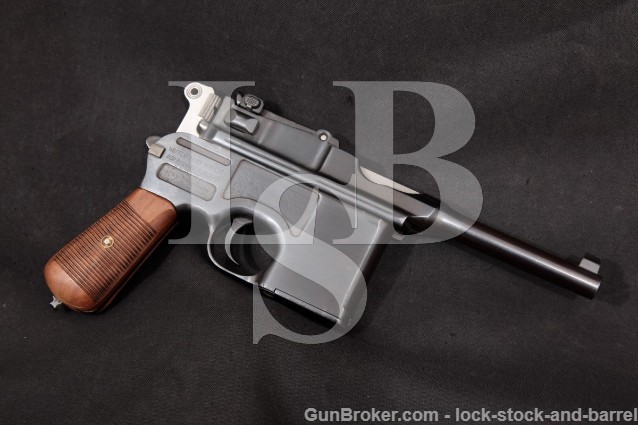 Sights / Optics: The pistol is mounted with a “V” notched rear sliding elevator sight with markings from “50-1000” that is pinned to the barrel extension. The front sight is an inverted “V” notch fixed to a rectangular base on the barrel.

Stock Configuration & Condition: The grips are grooved walnut with 25 horizontal grooves each. The grips show a few dings and drag lines. The wood between the grooves is slightly flattened down the center on both sides as though the grip was put in a giant press after the grooves were cut. The grips are in about Fine overall condition.

Type of Finish: The pistol is blued. The bolt, lock frame and hammer are “in The White”.

Finish Originality: The pistol has been refinished.

Overall Condition: This pistol retains about 98% of its current metal finish. There is light pitting under the finish in the milled areas on the sides of the frame, the extractor, and in the grooves of the barrel extension side rails. There is heaving pitting in the edges of the front strap and backstrap, and pitting in the rear faces of the hammer and lock frame. There are grinding marks under the finish at the top of the backstrap under the lock frame and rounding of the frame edges. There is thinning at the front edge of the barrel, a drag line and a small scuff mark on the left side of the magazine, light scratches in the magazine floorplate, and a few light handling marks scattered over the surfaces. The left rear edge of the hammer is disfigured. The serrations on the bolt and safety show light wear with a tiny ding in the bolt. The grip screw is disfigured. The markings are thin in spots from polishing, but clear, except for the patent markings on the right side of the frame, which are very thin. There is a boss for a lanyard ring on the bottom of the grip frame, but the ring is missing. Overall, this pistol rates in about Very Good condition as refinished.

Mechanics: The rear of the frame is slotted for a shoulder stock. The barrel extension has a small amount of side-side play on the frame. This pistol has a “New Safety” that requires the hammer to be pulled back slightly while the safety is engaged. The action functions correctly. We did not fire this pistol. As with all used firearms, a thorough cleaning may be necessary to meet your maintenance standards.

Our Assessment: The Broomhandle Model 1896 Mauser is certainly an interesting looking firearm. Its features are the most distinctive of any other pistol. In addition to being popularized in Soviet films as the iconic weapon of the Russian revolution and civil war, it was even used as a basis for futuristic weapons like the blaster used by Han Solo in Star Wars. This pistol is a Late Post-War Bolo. It has been refinished and the grips have been replaced. The pistol is in about Very Good condition with about 98% of its current finish remaining. The bore is bright with sharp rifling and no erosion. This pistol should appeal to a shooter who always wanted to own a Broomhandle as well as to Broomhandle collectors. It will really display well, especially from the right side.