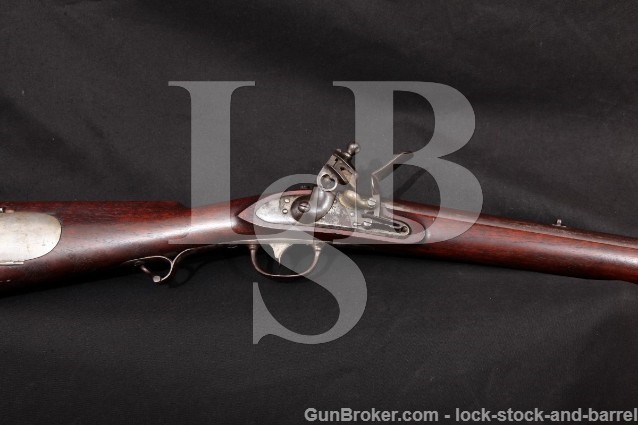 Markings: The lockplate is marked “US / DERINGER / PHILADA“. The left rear of the barrel is marked “GF” and “P / US”, and below that with “JP” that looks like it was scratched rather than stamped. The left stock flat is marked “V / GF”. The top of the upper hammer jaw is marked “K”.

Barrel Length: The round barrel is 35 ¾” in length and has 7  grooves.

Stock Configuration & Condition: The stock is a one-piece walnut with a straight grip and a flat steel buttplate. There is an oval steel spring loaded patchbox on the right side of the buttstock. The forend is held with two barrel bands and a combination barrel band/nosecap. There is a sling swivel on the back of the finger spur (on lower tang behind trigger guard) and another on the bottom of the center barrel band. There is hole through the nosecap and the bottom of the forend is grooved to accept a ramrod. The wood is dark with oil staining, but we can see fiddleback patterns in the forend. There is a deep bruise at the left rear of the buttstock with a few smaller dings in the buttstock, a few small dings in the edges of the left stock flat and a few more small dings scattered over the forend. There is a small piece of wood missing at the forward edge of the patchbox release. The wood is slight shy of the buttplate at the toe, but otherwise the wood to metal fit is very good. The LOP measures 139/16” from the front of the trigger to the back of the buttplate. The buttplate shows scattered scabs of erosion over much of its surface. The buttplate is in about Good condition. The stocks rate in about Fine condition.

Finish Originality: There are no indications that this rifle was ever refinished.

Bore Condition: The bore is gray with sharp rifling and no erosion that we could see.

Overall Condition: This rifle retains about 18% of its metal finish. There are areas of solid erosion scattered over the surfaces with the exception of the hammer, patchbox and the screw plate on the left side of the forend. There are also a few spots of heavy erosion under the patina of the barrel: mostly in the front section from the muzzle to the nosecap and just in front of the center barrel band. The screw plate shows light pitting. The patchbox shows a few dark spots of erosion, a drag line and light scratches from sanding/polishing. The screw heads are sharp, with a few showing light marks from a screwdriver. The markings are clear. Overall, this rifle rates in about Very Good condition.

Mechanics: The action functions correctly. The hammer has a half-cock position. We did not fire this rifle. As with all used firearms, a thorough cleaning may be necessary to meet your maintenance requirements.

Box, Paperwork & Accessories: Included with the rifle is a brass tipped ramrod which is threaded on its opposite end, and a steel spiral tip for a patch with female threads stored in the patchbox. The ramrod shows light erosion and is in about Very Good condition.

Our Assessment: This is a U.S. Model 1817 “Common rifle” manufactured by Henry Deringer of Philadelphia between 1819 and 1821. The lock plate of this first contract rifle lacks the date found on second contract rifles made from 1821 onward. The rifle has a round barrel, a lockplate with beveled edges in front of the hammer and rounded edges behind it and has a detachable brass pan and reinforced hammer. The stock has a trigger guard with finger spur, an oval steel patchbox and flat steel buttplate. The rifle comes with a brass tipped ramrod and has a spiral tip stored in the patchbox for use with a cleaning patch. The Model 1817 rifle was the primary U.S. rifle issued between the War of 1812 and the Mexican War and was manufactured by various contractors between 1817 and the early 1840s. Many M1817 rifles were still in service with state militias at the beginning of the Civil War. This rifle is in about Very Good condition and has a gray bore with sharp rifling and no erosion. This rifle is a great looking rifle that is sure to catch the eye of the collectors of US military arms as well as those who collect flintlock rifles. It isn’t every day that you get to see a 200-year-old rifle that is in this nice of a condition. Please be sure to examine our pictures in detail.