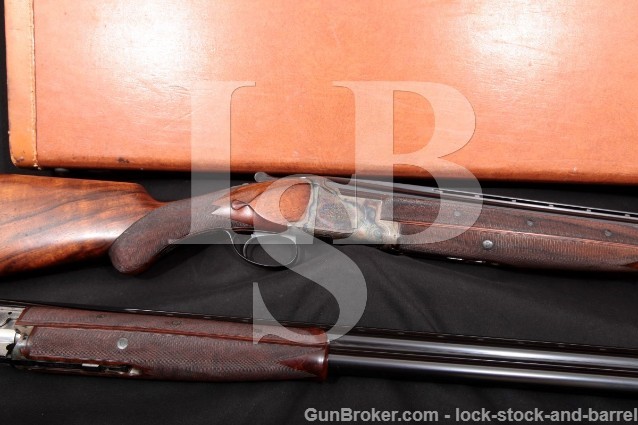 Markings: The left side of each upper barrel is marked “FABRIQUE NATIONAL D’ARMES DE GUERRE __ HERSTAL BELGIQUE”, the right of each is marked “MADE IN BELGIUM”. The top-rear of the 30″ barrel set’s rib is marked with a “I” in gold, the 26″ is marked “II”. The bottom-left of each monoblock is marked “81589”. The top tang under the lever and the bottom tang are marked “81589”. The safety/selector markings “S”, “O” and “U” are in gold. The sculpted receiver, lever, safety/selector, cocking plate, trigger guard, bottom tang and forend irons have extensive and gorgeous floral and tight-scroll engraving with border patterns around all features including the barrel’s top breeches and shoulders. Even the lever has a small floral motif in the checkering on each side. If performed by the Browning Custom Shop this would be C2 engraving. The water table is marked with a crown over “PV”, “* / L” and Perron tower proofs. The buttpad is marked “LONDON GUNS / SANTA MONICA, CALIF.”. Additional markings on the barrel sets are:

Sights / Optics: Each barrel set has a silver-colored bead at the front of their finely checkered ventilated rib

Stock Configuration & Condition: The buttstock is finely checkered walnut with a round-bottom pistol grip, straight comb, solid orange rubber pad and teardrop side panels in front of the wrist. The forends are each three-piece finely checkered walnut with schnabel tips. The 26″ barrel’s forend has a very small mark on the bottom the the left of the latch, other than that, there is no notable wear or damage, only light handling marks. There are a couple of small spots in the borders of the checkering which appear to have some pooled finish, but this is scarcely noticeable except on very close inspection. The checkering is well defined and without mars. There are no chips or cracks. The LOP measures 14 1/8” from the front of the trigger to the back of the pad, 13 3/8″ to the back of the wood. The pad has light wear around the edge with a few spots of light discoloration from age and oil, in about Very Good-Fine condition. Drop at comb measures approximately 1 3/8” with the 30″ barrel installed, 1 5/16″ with the 26″ barrel installed. Drop at heel measures approximately 1 15/16” with the 30″ barrel installed, 1 13/16″ with the 26″ barrel installed. The stock is cast just slightly off. The stocks rate in about Excellent overall condition.

Bore Condition: The bores are bright, there appears to be very light erosion in and imediately in front of the chambers as well as near the muzzle, but this will likely prove to be stubborn fouling or melted plastic which will clean out with a patient cleaning. The top barrel of the 26″ barrel set has a shelf approximately 2 3/4″ from the muzzle which appears to be from opening the choke or may be a jug-choke.

Overall Condition: This shotgun set retains about 98% of its current metal finish. Each barrel set has very light wear from disassembly on the bottom barrel from the forend and a few spots of lightly thinning finish on the edges of the ribs. Otherwise, there are only light handling marks. The screw heads range from sharp to lightly tool marked with strong slots. The markings on the 26″ barrel set are shallow and soft as are many of the monoblock markings, otherwise they are clear (see Our Assesment for more information regarding markings). The engraving is crisp and shows great detail. Overall, this shotgun set rates in about Excellent condition.

Mechanics: The action functions correctly with both barrel sets. The shotgun features a single selective trigger and ejectors on all barrels. The action closes with a satisfying ‘clunk’, indicative of FN’s legendary craftsmanship, resulting in zero movement between the barrels and frame with both barrel sets. The safety does not automatically engage when the shotgun is opened. We have not fired this shotgun. As with all used firearms, a thorough cleaning may be necessary to meet your maintenance standards.

Box, Paperwork & Accessories: Included is a hard-sided Browning case with compartments for each barrel set, stocked receiver and accessories. The interior has a blue felt finish and the exterior has leather reinforcement at the ends with metal bolsters and latches. The exterior of the case has a few scattere light marks with the bottom having some discoloration from age and oil. The interior shows light wear from the contents. Overall, the case is in about Very Good-plus condition.

Our Assessment: What a beautiful gun! After the death of John Browning, his son Val would complete an over under shotgun with a single selective trigger and ejectors; the Superposed was introduced in 1931, it was an instant success; the factory did not produce any of these shotguns during WWII but just after the war ended, the factory came roaring back to life, creating some of their best product to date. This is a post-war FN produced gun, with barrel markings, or rather the lack of any “Browning” markings, indicating that it was produced for FN’s “exclusive market” also known as Europe. It has European-style features such as the tight-scroll and floral engraving, fine checkering and three-piece forends. There was no visible import mark, indicating it likely came to the US shortly after it was produced in 1960. The difference in the barrel markings depth, typeface and their straightness, the profiles on the ejector arms and monoblocks indicates that the second barrel set was likely added later, we believe the 26″ to be the original barrels as their forend iron’s border engraving lines up better with that of the receiver and the fit to the receiver is better as well. We believe the 30″ to have been added. While it’s possible that this is a Browning custom shop job, the buttpad indicates that this may have been a custom job by London Guns, who specialized in European-style firearms, though they were better known for their safari rifles. Either way, this is a Superposed you won’t see every day. A European-market produced gun in the United States with no visible import mark, C2 Grade-style engraving on its gorgeous case-colored receiver and equally beautiful stocks in a nice Browning carry case. Please see our photos and good luck!