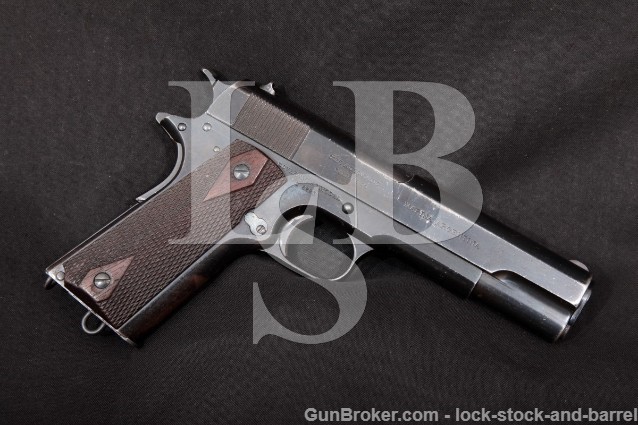 Bore Condition: The bore is gray and the rifling is shallow but sharp. There is light erosion scattered through the bore.

Overall Condition: This pistol retains about 85% of its current metal finish. The finish is thinning at all edges, moreso on the edges of the slide flats. There are several scattered light marks. The top of the slide has spots of wear which have discolored from oxidation, as does the frontstrap. There is some scattered very light freckling. There are several light marks under the finish. The right of the frame has impact marks around the slide-stop head and some nicks at the top-rear edge near the hammer. The mainspring housing has light surface erosion. There is moderate operational wear. The screw heads range from sharp to very lightly tool marked with strong slots. The markings are clear and crisp with the slide markings, excepting the rampant colt, seeming excessively deep and hard-struck, possibly re-marked in an arsenal refurbish. Overall, this pistol rates in about Very Good condition as refinished.

Our Assessment: Argentina first began purchasing Colt 1911s for their military in 1914, and this pistol is one of the first to be delivered to the Argentine Navy. Specifically, it falls into the serial range C6201-C6300, which were shipped April 11, 1914 to the Fore River Shipbuilding Company where the Argentine battleship Rivadavia was under construction. The next 100 were shipped the same day to a shipyard in New Jersey where another Argentine battleship was being built and, interestingly, the final 121 of the first order of 321 pistols for the Argentine Navy was shipped in November with the address not listed. This pistol is in about Very Good condition with about 85% of its finish remaining, a gray bore with light erosion and strong mechanics. The pistol has been refinished, and may be an arsenal refinish. It also appears to have had some marking re-struck, which may again be part of an arsenal refinish. For the dedicated Colt collector, this is an opportunity at a pistol which was in the shipment of the first 100 pistols for the Argentine Navy, which appears to be the first of the Colts actually purchased by Argentina. Please see our photos and good luck!