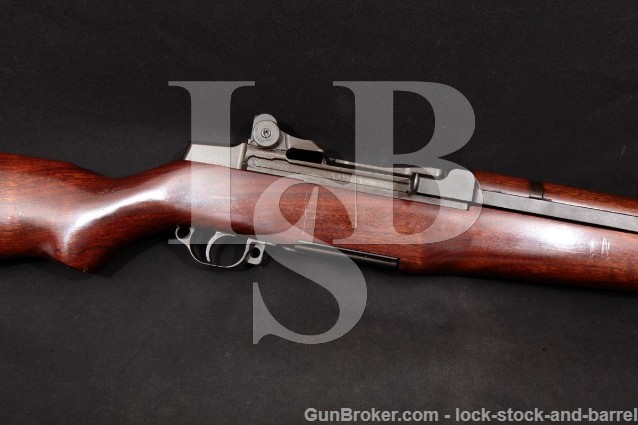 Markings: There is no visible import mark.

The gloss finished hardwood stock has a pistol grip, metal nose caps, a stacking loop, two sling loops and a metal buttplate with hinged door for storage in the butt. The wood shows various scrapes & compression marks. Most have been finished over. The gloss finish shows a few scrapes & scuffs that have dulled or damaged the finish. The LOP measures 13 inches from the front of the trigger to the back of the buttplate. The stock rates in about Very Good Plus to Fine overall condition as refinished.

Bore Condition: The bore is bright; semi bright near the muzzle. The rifling is deep. There no visible erosion. The bore shows an M.E. of 1. The throat shows a T.E. of 2.

Overall Condition: This rifle retains about 96% of its metal finish. The barrel has oxidation & some pin prick surface erosion showing through the lacquer finish. Much of the lacquer finish on the receiver has been lost. The barrel & receiver shows various light scrapes & a few small scratches. The screw heads are intact. The markings are deep. Overall, this rifle rates in about Fine condition.

Our Assessment: This is a Type I Springfield Armory National Match M1 Garand Rifle. It was made back in 1956 and originally came with only a National Match marked barrel. The rifle has subsequently been upgraded with National Match sights and has been coated in lacquer. Type 1 National Match M1 Rifles were made between 1953 and 1956. This one still has a strong bright bore that should shoot nice groups. It will add to you collection and should be a ton of fun to shoot.