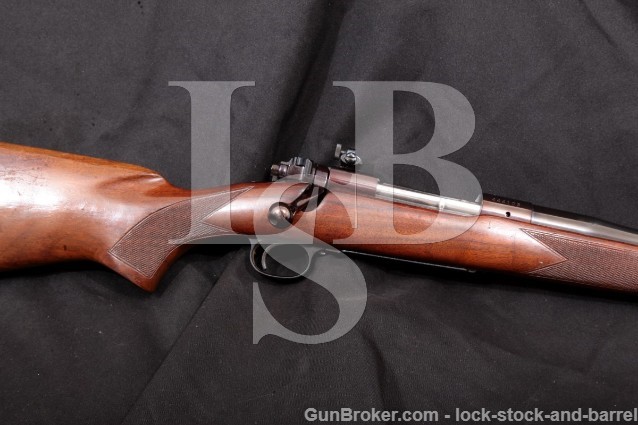 Sights / Optics: The front sight is a steel bead dovetailed into a finely checkered ramped base screwed to the barrel. The rear sight holes have been filled. The top front of the receiver is drilled, tapped and filled for a scope mount and the top rear is drilled and tapped. There is a Lyman aperture sight screwed to the left side of the receiver. The vertical scale on the left side of the sight is marked from “O” to “45” and the windage is also screw adjustable. The sight has a screw-in aperture with an OD of 0.515”.

Stock Configuration & Condition: The stock is one-piece hand checkered walnut with a lacquered finish, a pistol grip, Monte Carlo comb, and a red solid rubber recoil pad marked “WINCHESTER” that is mounted with a black spacer. There are sling swivels mounted on the underside of the forend and in the belly near the butt. Much of the finish along the top and sides of the comb has been worn off, and there are multiple light drag lines scratches and scuff marks in the buttstock. There is light wear on the bottom edge of the grip and several shallow dings and drag lines in the forend. The checkering shows light wear, with several tiny mars in the forend checkering. The LOP measures 13 ½” from the front of the trigger to the back of the recoil pad. The recoil pad shows light wear at the heel and a thin piece of the surface missing at the edge of the toe. The pad is still pliable on its edges. The pad is in about Fine condition. The stock rates in about Very Good Plus condition.

Overall Condition: This rifle retains about 99% of its current metal finish. There are light scrape marks through the finish at the muzzle end of the muzzle brake and a few light marks in the barrel. There are a few tiny marks in the left side of the receiver and a few light marks in the magazine floorplate. There are also several light scratches under the finish in the floorplate. The trigger guard screws are distressed and one of the fill screws is missing at the top rear of the receiver. The barrel markings are clear except for the proof mark, which is shallow, and the proof mark has been removed from the left side of the receiver. Overall, this rifle rates in about Very Good to Fine condition as refinished.

Mechanics: The action functions correctly. There is a safety mounted on the right side of the receiver. Pushed forwards, the safety is OFF. If pulled back all the way, it locks both the bolt and the trigger. If pulled back half-way, it blocks only the trigger. We did not fire this rifle. As with all used firearms, a thorough cleaning may be necessary to meet your maintenance standards.

Box, Paperwork & Accessories: There is a muzzle brake screwed to the front of the barrel and secured with a set screw on the underside of the barrel. The brake has two slots in its upper surface that do not go completely through the sides, but apparently go through ducts in the sides of the brake and come out at the front edge of the barrel.

Our Assessment: This is a vintage pre-1964 Winchester Model 70 rifle made in 1959 and chambered in .375 H&H Magnum. The rifle has had a muzzle brake added to the front of the barrel, and the rifle has been refinished. The rifle is in about Very Good to Fine condition as refinished. The bore is bright with sharp rifling and no erosion. The rear sight has been removed and a Lyman aperture sight was added to the left side of the receiver. The top of the receiver is also drilled and tapped for scope mounts. The pre-64 Winchester Model 70 actions are prized by shooters and collectors alike for their smoothness and reliability, and this one is no exception. The Model 70 was the favorite hunting rifle of a plethora of knowledgeable sportsmen and gun writers of the era who sang its praises and also became the favorite American action on which to base a fine custom sporter. The pre-1964 Model 70 has a controlled feed action whereby the bolt picks up the cartridge as it is stripped from the magazine, capturing it by the extractor, and holding the cartridge against the front face of the bolt as it is being fed into the chamber. Besides feeding the cartridge it into the chamber more reliably with a push feed system, the extractor is also larger, allowing extraction of stuck cases that might defeat a smaller push feed extractor. The .375 H&H Magnum is the smallest cartridge that is legal to hunt the Big Three (Lion, Elephant and Cape Buffalo) in Africa. It is a very flat shooting cartridge compared to the larger .416 Rigby and .458 Winchester, but is probably not the best choice for Cape Buffalo, which can reach 1600 pounds. It is very useful on thin skinned game like the larger antelopes as well as on Lions, which are also thin skinned. The addition of the muzzle brake and the new finish may turn-off the serious collectors, giving the shooters a chance at a very well made and reliable rifle, and with the muzzle brake, it should be a lot more comfortable to shoot than the larger magnums.

CA Legal or CA Private Party Transferable: This C&R eligible rifle can be transferred in California.