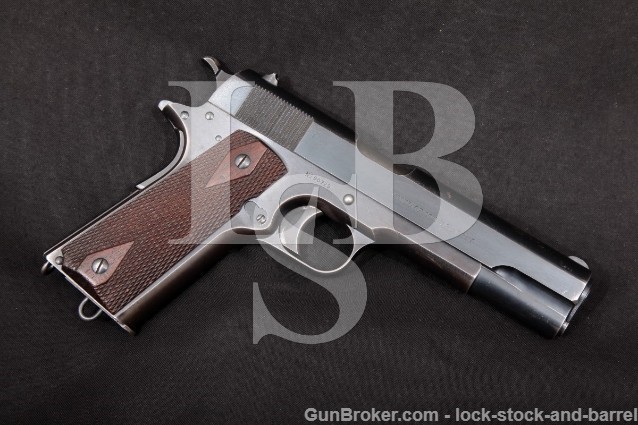 Sights / Optics: The pistol is mounted with a “U” notched, flat-top rear sight dovetailed into the slide and a short, rounded blade front sight fixed to the slide.

Finish Originality: We suspect this pistol has been refinished. See Overall Condition.

Bore Condition: The bore is semi-bright with shallow but sharp rifling. There is light erosion scattered through the bore.

Overall Condition: This pistol retains about 90% of its metal finish. The finish is thinning at all edges. The slide has scattered light marks and thin scratches with some infrequent, light freckling along the top and near the right slide serrations. The frame has some light scratches, mostly near the pin heads, a rounded scratch under the slide stop, a spot of marring on the top edge of the trigger guard under the slide stop, wear at the front of the dust cover and the bottom of the trigger guard. There is a distinct line along each side of the grip frame at the bottom of the trigger guard to the back edge where the “grain” of the finish transitions from horizontal to vertical and the tone of the finish is slightly different. The markings are clear and the inspection mark on the frame is crisp. The grip screws have finish loss and light tool marks with strong, mostly sharp slots. The magazine lock screw is disfigured with a useable slot. Overall, this pistol rates in about Very Good-Plus condition as possibly refinished.

Mechanics: The action functions correctly. It has both a manual and grip safety and the trigger pull is crisp. The slide is tight to the frame. We did not fire this pistol. As with all used firearms, a thorough cleaning may be necessary to meet your maintenance standards.

Box, Paperwork & Accessories: This pistol comes with single blued 7 round magazine that has a lanyard ring on the bottom of its floorplate. The top 1/3 of the magazine appears to have been finished “In The White” and since discolored from oxidation. The body shows thinning and is sprinkled with tiny spots of surface frosting and operational wear. The magazine is in about Very Good condition.

Our Assessment: The 1911 and 1911-A1 pistols served the military of the United States from 1911 to 1985, through two World Wars and the Korean and Vietnam wars. They gained a reputation as a reliable handgun with plenty of stopping power, and are held in high regard by those who have used them. This pistol was made in 1914, shortly before the United States would join the Great War. This pistol is in about Very Good-Plus condition with about 90% of its finish remaining. The markings are nice and clear and most of the finish appears original, however there is a line across the grip frame where the grain of the finish transitions from horizontal to vertical and the tone of the finish changes slightly. The bore is semi-bright with shallow, sharp rifling and light erosion scatteredthrough the bore. The markings on the pistol and barrel are correct for a 1914 pistol as are the under-cut slide stop and safety. This is a very desirable pistol: it is very uncommon to see a 104 year old pistol, not to mention one made before the war which survived the trench warfare of WWI in a condition this nice. We expect the serious Colt collectors to be extremely interested in this pistol. Please see our photos and good luck!

The change in direction of the grain of the finish is consistent with this production period (this can be seen clearly in the photo of # 90723 on pg146 of Meadows’ “U.S. Military Automatic Pistols”, also that of # 40176 pg156 and several in the gallery pgs176-185). The finish is original.