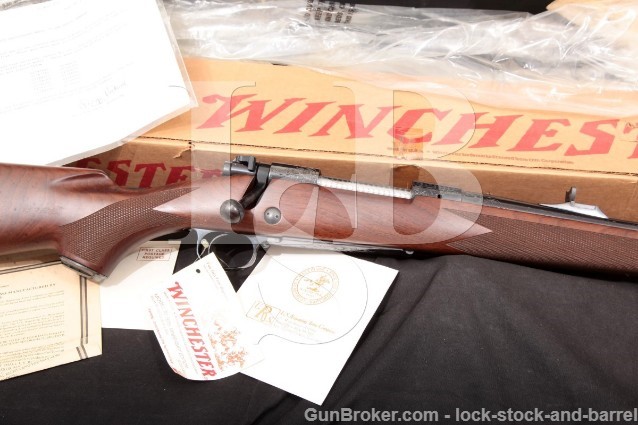 Model: 70, 50th Anniversary Edition. G7050ANV. Only 500 of these guns were made – and this is one of the hyper-rare documented Sales Force Samples and thus is not in the usual serial number range. This is confirmed by the accompanying factory letter.

Markings: The left side of the barrel is marked “WINCHESTER MODEL 70 XTR SPORTING MAGNUM – 300 WIN MAG / MADE IN NEW HAVEN, CONN. U.S.A. – WINCHESTER PROOF STEEL”, the top has “WP” in oval. The left side of the receiver is marked “WINCHESTER / TRADE MARK”, the right is marked with the serial number. The bolt body is marked “210”. The recoil pad has Winchester Repeating Arms Co.’s logo. The rifle is beautifully hand engraved and marked in script “The Riflemans Rifle 1937-1987” on the right of the barrel.

Stock Configuration & Condition: The stock is a cut checkered piece of American Walnut, showing an engraved steel pistol grip cap, sling swivel studs at the belly and forearm and a thin red rubber recoil pad. There are truly no marks or imperfections to the wood and the checkering remains sharp. Even the sticker is retained. It is unlikely that this rifle spent much time at all outside of the box… In addition to the condition, this is a far better than average piece of wood. The LOP measures 13 1/2″ from the front of the serrated trigger to the solid rubber recoil pad; the pad has light marks, in Excellent condition. The stock rates in Excellent overall condition.

Overall Condition: This rifle retains about 99% of its finish. The metal surfaces have only one or two tiny marks, incurred during storage or handling as a sales sample. It is truly sharp and probably unfired. That said, the bolt has been cycled a few times and the tip of the bolt handle has thinned a bit. The screw heads are sharp. The markings are crisp. Overall, this rifle rates in about Excellent condition and is LNIB.

Mechanics: The action functions correctly. The trigger is crisp with almost no take-up; the bolt glides with fluidity. We did not fire this rifle. As with all previously owned firearms, a thorough cleaning may be necessary to meet your maintenance standards.

Box, Paperwork & Accessories: The rifle comes with its original cardboard box, paperwork, hang tag and bag. These accessories are a bit worn, but considering it is 30 year old paper, they are better than average. The box end label is still retained. A laminated factory letter is also included, listing the serial numbers of the 14 sample guns… This being one of them.

Our Assessment: America’s Rifle, The Rifleman’s Rifle… Whatever you call it, this rifle is a piece of America as much as Baseball and apple pie. “The Winchester Model 70 is a bolt-action sporting rifle. It has an iconic place in American sporting culture and has been held in high regard by shooters since it was introduced in 1936, earning the moniker “The Rifleman’s Rifle”. The action has some design similarities to Mauser designs and it is a development of the earlier Winchester Model 54.

The Model 70 was originally manufactured by the Winchester Repeating Arms Company between 1936 and 1980. From the early 1980s until 2006, Winchester rifles were manufactured by U.S. Repeating Arms under an agreement with Olin Corporation, allowing USRA to use the Winchester name and logo. Model 70s were built in New Haven, Connecticut, from 1936 to 2006, when production ceased. In the fall of 2007, the Belgian company FN Herstal announced that Model 70 production would resume. As of 2012, new Winchester Model 70 rifles were being made by FN Herstal in Columbia, South Carolina. In 2013, assembly was moved to Portugal.”

Hemmingway had one and almost everyone here at LSB has one. What better way to commemorate this great rifle than to own one – better still to own one that commemorates the rifle itself. 500 of the 50th Anniversary Rifles were made, but only 14 as sales samples. This is one of the rare 14, it is practically MINT and it is in one hell of a caliber. Please see our pictures and good luck!