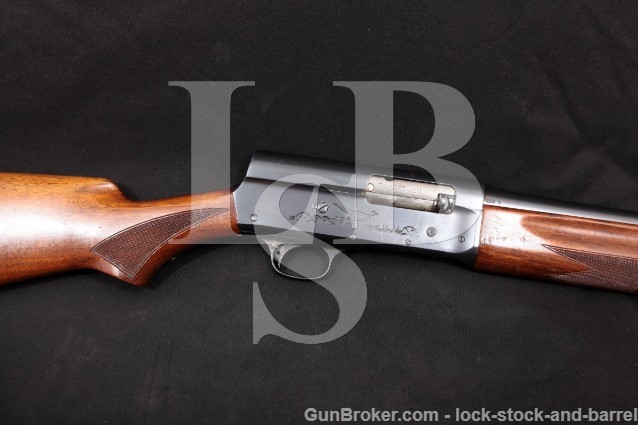 Sights / Optics: The front sight is a steel bead fixed to the front of the barrel. The top of the receiver has a shallow, serrated groove as a sighting plane.

Stock Configuration & Condition: The stocks are two-piece checkered walnut with a pistol grip, finger grooves in the forend and a serrated black hard rubber Remington buttplate. The forend has scattered deep bruises on the left side, shallower bruising in the checkering and scattered compressions on the right, vertical lines of lightly thinning finish on both sides and two thin cracks on the bottom at the rear edge. The buttstock has scattered light compressions and drag lines with similar vertical lines of thinning finish. The buttstock has no chips or cracks. There is a sling swivel mounted to the left of the toe with the other mounted on the front of the forend cap. The cartouche marking is very faint. The LOP measures 14″ from the front of the trigger to the back of the buttplate. The plate has scattered light wear with mottled brownish discoloration and sharp serrations and lettering, in about Very Good condition. The stocks rate in about Good condition as not original to the gun.

Overall Condition: This shotgun retains about 92% of its metal finish. The barrel and receiver have a scattered light marks, the receiver has two scratches on the right, one above and one below the ejection port, the top edge of the “humpback” has thinning finish and there is a spot of light surface erosion on the top-right of the receiver. The bolt and lifter have light operational wear and light freckling. The screw heads range from sharp to lightly disfigured with strong slots. The markings are clear. Overall, this gun rates in about Very Good condition.

Our Assessment: The Remington model 11 shotgun shares the same basic action as the Remington Sportsman, The Browning A5 and the Savage 720. Like all of those shotguns, it has also seen some military use. The Sportsman was used in field configurations for recreational shooting and for aerial gunnery training, while riot configurations like this one would typically be used by guards at bases or industrial locations vital to the war effort. This example is in Very Good condition with a new buttstock which has a faint cartouche but with 92% of its original finish remaining, good clear markings, strong mechanics and a great bore. Military shotguns themselves are scarce when compared with rifles and handguns, but this is a rare opportunity to own one of the few semi-automatic shotguns from the U.S. war effort during WWII. Please see our photos and good luck!