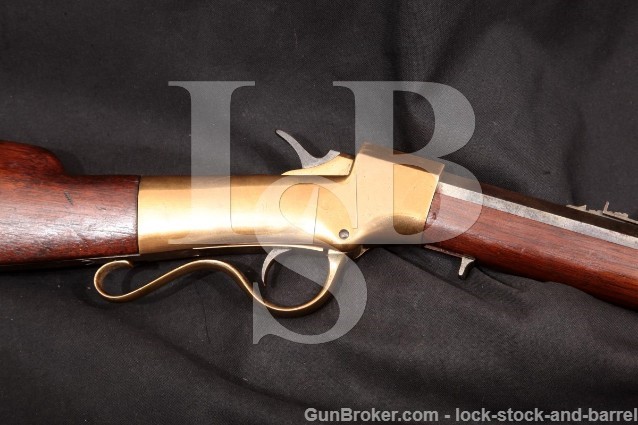 Stock Configuration & Condition: The stock is a two-piece walnut with a straight grip and a brass crescent shaped buttplate. The forend is screwed to the underside of the barrel. (Civil War carbines made for the Union were made with barrel bands.). The stocks have been refinished with a reddish-brown lacquer that looks like the finish was applied too thick: large area of the buttstock have a dull rough finish as though the lacquer was exposed to excessive heat to help it dry. There is a 3” long crack down the belly starting at the back edge of the lower tang and a 2” long crack running along the left side of the comb starting at the back edge of the upper tang. There are multiple dings, bruises and drag lines under the finish including a deep bruise on the left side of the forend. The LOP measures 13 3/8” from the front of the trigger to the back of the buttplate. The buttplate has been coated with lacquer, and shows a bright gold color where the lacquer remains and a duller yellow color where the lacquer has worn off. There is extremely light wear at the heel with several light handling marks showing dark streaks or spots of tarnish. The buttplate is in about Very Good condition. The stocks rate in about Fair condition.

Type of Finish: The barrel is blued, the frame, breechblock and lever are brass and the hammer and trigger are case colored. The barrel, frame and lever appear to have been covered with lacquer.

Finish Originality: The lacquer is certainly not original, but it will come off with a good solvent and, at least on the barrel, 0000 steel wool. Since we can see the original bluing on the barrel under the lacquer, we will be describing what we see as if the lacquer is not present.

Bore Condition: The bore is gray with moderate wear in the rifling. There are spots of moderate erosion from the muzzle back several inches.

Overall Condition: This rifle retains about 30% of its metal finish. The barrel shows thinning with finish loss its edges, and light handling marks and light erosion scattered over its surfaces, with a few spots of heavier erosion around the rear sight. The frame and lever show light handling marks with several small dings, and the frame also shows a few drag lines. There are also light wire wheel marks in the top of the frame behind the hammer and a few dings in the lower tang. There is a small but deep ding in the left side of the frame at the front of the hammer with a very sharp ding just above it – please see our pictures for a better definition than we can put in words. The screw heads are disfigured. The markings are clear. Overall, this rifle rates in about Good condition.

Mechanics: The action functions correctly. There is a manual full-length ejector at the underside rear of the forend. There is a safety notch in the hammer that can be used to pull the hammer back about 0.010” from its full forward position to keep it just off the head of the cartridge. We did not fire this rifle. As with all used firearms, a thorough cleaning may be necessary to meet your maintenance requirements.

Our Assessment: The Ballard is an interesting rifle in that it began its career during the American Civil War, when it was produced in relatively small numbers (only about 24,000 from 1862-1873) by five different manufacturers. It was ultimately made a commercial success when made into one of the staples of the Marlin Company. Charles H. Ballard invented the rifle and the famed arms agents Merwin & Bray secured government contracts and lined up the firearms companies to make them. Ball & Williams were the first company to do so and made more rifles than the other companies involved in the war effort. This Sporting Rifle was made by Ball & Williams, and has the same markings as the military rifles made during the Civil War, including the “Merwin & Bray Agt’s” mark on the left barrel shoulder. It has a heavy octagon barrel chambered in .38 Rimfire and a brass frame. The barrel, frame, and breechblock have matching serial numbers, but the whole rifle, metal and wood, has been covered in lacquer to preserve it. The rifle is otherwise in about Good condition with two cracks in the buttstock. The is certainly a very interesting rifle, and we don’t see many of them. Ball & Williams only produced about 15600 total, mostly for the military, with about 5000 Sporting Rifles made according to Flayderman’s. If this were ours, we would strip the lacquer off all parts, seal the cracks and then lightly sand and refinish the stocks. We would then have a great looking rifle with at least an original looking finish that ought to look great in a collection of other Ballard rifles.