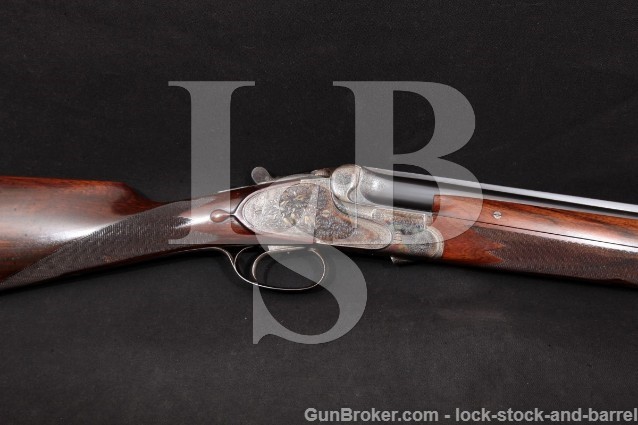 Barrel Length: 27 1/2″ (70 cm) with solid rib with top serrated to reduce glare. The barrels meet at the muzzles and there is engraving on the front face of the ribs, indicating that this gun has not been cut.

Sights / Optics: There is a silver colored bead at the front of the rib.

Stock Configuration & Condition: The stocks are four-piece walnut with checkered forend, two smooth panels screwed to the center rib, one on each side forming the top half of the forend, scheckered straight-grip stock with straight comb and a ventilated black rubber recoil pad. The forend has a few scattered light compressions and drag lines with a short crack at the bottom-left-rear of the bottom portion. The buttstock has a 2″ long sharp-edge and deep compression on the right of the wrist at the rear of the checkering, another similar but shorter compression on the right of the wrist at the bottom-center of the checkering and several scattered light compressions, drag lines and scuffs. There are no chips and no cracks not described. The wood is well fit to the metal. Outside of the compressions, the checkering is very well defined. The LOP measures 14″ from the front of the trigger to the back of the pad and 13 3/4″ to the back of the wood. Drop at comb is 1 1/2″, drop at heel is 2 1/4″. The pad is compressed, hardened with age, and has had the rear face covered with a sheet of leather, in about Poor condition. The stocks are in about Very Good-plus overall condition.

Finish Originality: Original, though the brass plate in the belly appears after-market.

Overall Condition: This shotgun retains about 95% of its current metal finish. The barrels have a few scattered light marks and some light wear from the forend, concealed when assembled. The edges of the rib have a few light nicks and thinning finish. The receiver has strong case-color with thinning at some edges, most notably the top edges of the fences. The front-right corner of the rear locking lug has a nick and the front locking lug shows operational wear. The bottom tang and trigger guard show handling wear. The screw heads range from sharp to lightly tool marked with strong slots. The markings are clear except for some markings on the barrels stamped on rounded surfaces. Overall, this shotgun is in about Fine condition.

Mechanics: The action functions correctly including the ejectors. The barrel is selected using a sliding lever to the left of the trigger. The lockup is solid with no play. The mechanically-operated trigger is light and crisp. We have not fired this shotgun. As with all used firearms, a thorough cleaning may be necessary to meet your maintenance standards.

Our Assessment: Franz Jaeger was born in 1876 in Germany to a farming family. As he was a younger son, he would not inherit the farm and his uncle, a military gunsmith, got him an apprenticeship with a gunmaker. When his own business failed, he decided to seek his fortune in America where he found work as a gunsmith and met his wife, also a German. In America he would take out his first of many patents for a single-trigger mechanism. Around the turn of the century, he would go back to Germany with his family where he had a quite successful business, at one point employing more than 50 people. During WWI he would develop the “Jager Pistol” as it was decreed that all gunmaking would be for the war effort. After the war, Jaeger struggled as many others in German industry did, but he continued his business, making sporting guns such as this one, produced in 1928. The gun is in Fine condition with about 95% of its finish, bright bores and strong mechanics with a solid lockup. The engraving is beautiful, with great detail on the game scenes. While this would no doubt still make a fantastic upland bird gun to this very day, almost a century after it was made, due to its collector value it will more likely end up being snapped up by a collector looking for a nice 20 Gauge Over-Under gun or fine European shotguns. Please see our photos and good luck!