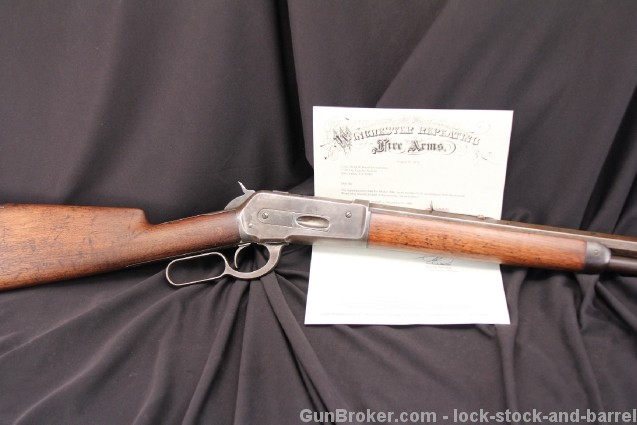 Make: Winchester
Model: 1886
Serial Number: 3119
Year of Manufacture: 1886
Caliber: .40-82 WCF (Winchester Center Fire)
Action Type: Lever Action Rifle , Tubular Magazine
Markings: The top of the barrel is marked “Manufactured By The / Winchester Repeating Arms Co. New Haven. Conn. U.S.A.” and “40-82 W.C.F.”. The upper tang is marked “Model 1886”. The lower tang is marked “Pat. Oct. 14. 1884. / Jan. 20. 1885” and “3119”.
Barrel Length: Cut to 20 1/4″
Sights / Optics: This rifle is mounted with a dovetail set front blade and a dovetail set rear leaf and elevator sight. The rear sight is a semi buckhorn, with the elevator present. The rear sight is marked “Marbles / Gladstone / Mich.”.
Stock Configuration & Condition: The stocks are smooth wood. The forearm has been varnished while the wood remains oil finished. The stock looks to have been cleaned and lightly sanded at some point, though there is still age darkening. Both pieces show numerous nicks and dings throughout. There is a hairline crack on the underside of the forearm and another behind the upper tang that extends to the left side of the stock, almost all the way to the buttplate. The wood to metal fit is good, though being sanded has affected the fit just a bit. The LOP measures 13″. The stocks rate in about Good overall condition.
Type of Finish: Blue & Case Color Hardened
Finish Originality: Factory Original
Bore Condition: The bore is gray and the rifling is worn but visible the entire length. There is moderate erosion in the grooves. This bore probably rates a 5 / 10.
Overall Condition: This rifle retains about 5% of its metal finish, found only in protected areas. The balance of the finish shows a moderate drift to patina. There are some dings and marks on both sides of the barrel, ahead of the forearm. The tip of the hammer shows an old silver solder repair and the muzzle shows tooling marks from being cut. There is very mild erosion scattered, though none deep enough to be considered pitting. The metal is good and smooth. The Screw heads are Very Good, with a bit of wear but better than you’d expect. The markings are clear. Overall, this rifle rates in about Very Good condition.
Mechanics: The action functions correctly. There is a set screw behind the trigger, making the trigger as crisp as could be hoped for with practically no creep. We did not fire this rifle.
Box, Paperwork & Accessories: This rifle comes with a Cody letter confirming the caliber, octagonal barrel and application of serial number on 12/22/1886.
Our Assessment: The Winchester Lever Actions from 1860 to 1873 were primarily chambered for what could be called “Pistol Cartridges”. The 1876 was the first rifle they chambered for “Rifle Cartridges” and the Model 1886 continued the trend towards chambering heavier rounds, and had an all-new and considerably stronger locking-block action than the toggle-link Model 1876. It was designed by John Moses Browning, who had a long and profitable relationship with Winchester from the 1880s to the early 1900s. William Mason made some improvements to Browning’s original design. In many respects, the Model 1886 was a true American express rifle, as it could be chambered in the more powerful black powder cartridges of the day, such as the .45-70 Government (chambering a rifle for the popular .45-70 had been a goal of Winchester for some time). The 1886 proved capable of handling not only the .45 Gov’t but also .45-90 and the huge .50-110 Express “buffalo” cartridge. This rifle will be a good addition to any Winchester collection and it a FIRST YEAR PRODUCTIN GUN. This caliber .40-82 in an original 1886 is very rare!.