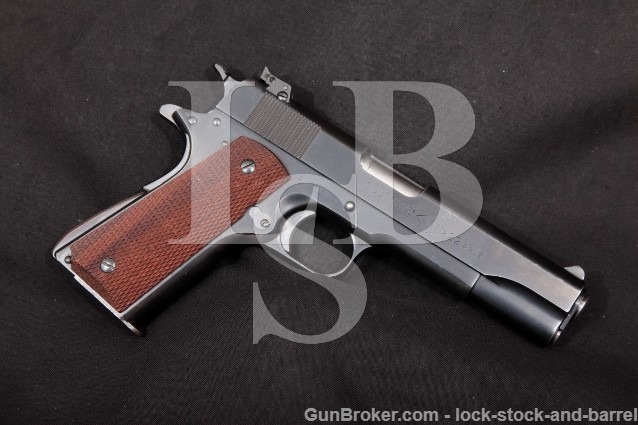 Stock Configuration & Condition: The grips are fully checkered walnut panels. The grips are dark with oil staining. There is no notable wear or damage, only light handling marks. There are no chips or cracks. The grips rate in about Excellent condition.

Overall Condition: This pistol retains about 87% of its current metal finish. The finish is thinning at most edges. The slide has a small patch of light surface erosion at the top-front of the left flat with some scattered light scuffs and a small nick on the bottom edge of the ejection port. The frame has some light marks on the dust-cover with a few nicks on the front edge, handling wear on the frontstrap, heaviest at the top and a few other scattered light marks. The mainspring housing has handling wear and a nick on the right edge. The grip safety, thumb-safety and slide-stop show light handling wear. The hammer, trigger and barrel show operational wear. The screw heads are sharp with light tool marks and some finish loss except for the magazine latch screw which is disigured with a useable slot. The pin heads are unmarred. The knurling on the trigger, hammer and mainspring housing is sharp. The markings are clear though the serial markings are shallow. Edges on the trigger relief cuts are soft, otherwise the refinish is very well done. Overall, this pistol rates in about Very Good condition.

Mechanics: The trigger pull is crisp and there is very little side-side play between the slide and frame. The action functions correctly. We have not fired this pistol. As with all used firearms, a thorough cleaning may be necessary to meet your maintenance standards.

Box, Paperwork & Accessories: This pistol comes with one two-tone magazine left unfinished on the top with the bottom blued. The thumbpiece slot, follower and floorplate markings are correct for a Service Model Ace. The magazine has operational wear with some scattered light freckling and frosting, in about Very Good condition.

Our Assessment: The 1911 and 1911-A1 pistols served the military of the United States from 1911 to 1985, through two World Wars and the Korean and Vietnam wars. They gained a reputation as a reliable handgun with plenty of stopping power, and are held in high regard by those who have used them. Yet it could be expensive to train thousands of soldiers to use the 1911 while feeding it .45 ACP, moreso at the outset of WWII when the US Military would see the greatest expansion in its history. The Colt Ace had been introduced in 1931 as a .22 Long Rifle version of their Government Model, but it was dimensionally different and had significantly less recoil than the real thing. David “Carbine” Williams adapted his floating-chamber design to intentionally increase the recoil of the .22 LR cartridge to the point that it was similar to that of .45 ACP, even allowing the use of the same recoil spring. This became the Service Model Ace and allowed for drastically reduced practice costs when training GIs to use their 1911s. This example was produced in 1941 and is in Very Good condition with about 87% of its refinish remaining. It is a fantastic specimen of a Service Model Ace, sure to take a prized place in a Colt or US Military handgun collection and with its new finish, it can be shot without fear of hurting the value too much. Please see our photos and good luck!