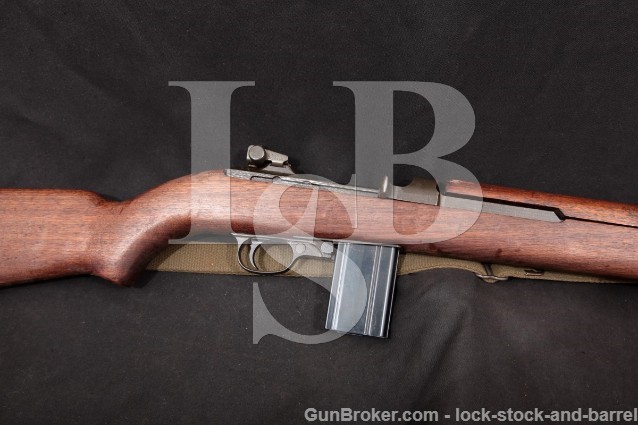 Stock Configuration & Condition: The stock has a pistol grip, metal barrel band with sling loop, sling well, sling pass through and a metal buttplate. The buttplate shows spots of oxidation. The barrel band has been refinished. Oxidation shows through the finish. The metal at the rear of the handguard is epoxied in place. The wood shows scrapes, scratches and compression marks. Many are deep and have damaged small portions of the surface wood. These marks have been oiled over. The LOP measures 13 1/2 inches from the front of the trigger to the back of the buttplate. The stock rates in about Very Good Plus overall condition as refurbished.

Bore Condition: The bore is bright, semi bright near the muzzle. The rifling is crisp. There is no erosion. The bore shows an M.E. of 0.7.

Overall Condition: This rifle retains about 97% of its metal finish. The front of the barrel is scraped. The right side of the receiver shows some thinning consistent with cycling. The metal shows other light handling marks. The screw heads show light use. The markings are deep. Overall, this rifle rates in about Very Good Plus to Fine condition.

Our Assessment: This Inland M1 Carbine was made by the Inland Manufacturing Division of General Motors during WWII. This M1 uses almost all Inland parts. Only the rear sight and magazine are not Inland parts… and it is easy to find an Inland magazine on-line or at a gun show. This M1 is in nice shape with a strong bright bore and strong metal finish. This is a Nice M1 to add to your WWII collection.

Here is some history from m1family.com : “The Inland Manufacturing Division of General Motors was organized in 1922 for the manufacturing of wood wrapped steering wheels. Inland Division of General Motors was one of nine contractor-established manufacturing facilities that tooled up and turned out M-1 carbines during WWII, a five-pound rifle considered the nation’s best ordnance effort of the war. By the end of the war, Inland had produced over two and a half million carbines.”

CA Legal or CA Private Party Transferable: This rifle is curio and relic eligible and can be transferred/sold in California. The 15 round magazine is not available to residents of California or any other jurisdiction with magazine capacity restrictions.