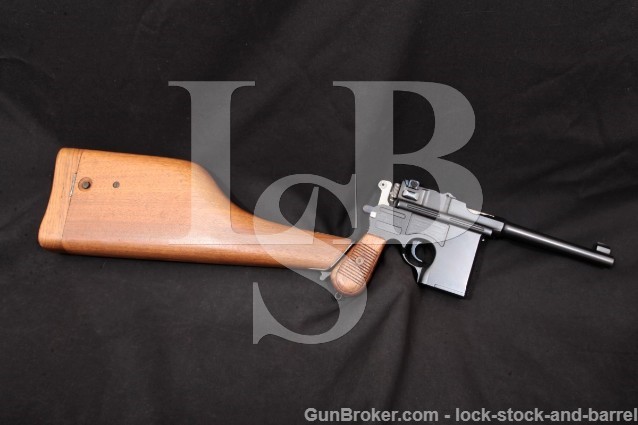 Markings: The left shoulder at the chamber, the back of the frame at the top of the backstrap and the back of the lock frame are marked “1850”. The top rear of the bolt is marked “1850” and with a starburst proof and the rear face of the hammer is marked “850”. There are Chinese characters on both sides of the frame, marked with pantograph, not stamped. The three characters on the left side translate to “First Type”. The characters on the right side indicate the model and the year it was made. The characters read right to left, the first two being the Nationalist Republic, the 2nd two as “ten eight” or 18 (1911+18 = 1929), and the last four representing Shanxi or Shanzi. The front strap is marked with the import mark “BTC / EL MONTE” and “CHINA / .45 ACP”. There are also import marks on the underside of the barrel, most of which have been ground off.

Sights / Optics: The pistol is mounted with a “U” notched rear tangent sight with markings from “100-1000”. The front sight is a tall blade front sight with a rectangular base which is fixed to the top of the barrel.

Stock Configuration & Condition: The grips are walnut with fourteen horizontal grooves. There are several dings in the grooved area of the left grip with light dings and bruises in the right grip. There are dings in the bottoms of the grips from impact from a lanyard ring. The grips are in about Very Good overall condition.

Type of Finish: The pistol is blued. The hammer, bolt and lock frame are “In The White”. The trigger, safety, bolt stop and rear sight slider have a fire blue finish. The extractor has a straw-colored finish.

Finish Originality: The finish was professionally restored after being imported into the United States.

Bore Condition: The bore is mostly bright with some gray mottling near the muzzle. The rifling shows very light wear. There is no erosion in the bore.

Overall Condition: This pistol retains about 99+% of its current metal finish. There are a few tiny marks under the finish but we didn’t see any handling marks in the finish except for light wear marks in the top of the bolt and extractor. The serrations at the top front of the hammer have been ground flat, while those at the top rear of the hammer show only light wear. The safety serrations are mostly sharp but flat in places. The grip is sharp. The pantograph markings on the sides of the frame are clear, but the markings on the rear sight elevator are thin and have obviously been polished. Overall, this pistol is in about Fine condition as restored.

Mechanics: The backstrap is slotted for a shoulder stock and there is a lug on the bottom of the grip for a lanyard ring. The action functions correctly. The trigger pull is a little stiff with a tiny amount of creep. We did not fire this pistol. As with all used firearms, a thorough cleaning may be necessary to meet your maintenance standards.

Box, Paperwork & Accessories: This pistol comes with a wooden holster/shoulder stock. The shoulder stock is walnut with a satin finish. It has a spring-loaded metal clasp that locks the stock into the dovetailed slot in the backstrap of the pistol. Therear of the stock has a push-button release hinged cover that covers the grip of the gun when used as a holster and serves as a buttplate when attached to the pistol. With the pistol installed in the holster, there is no play between the cover and the holster. The hinge has a “D” ring fixed to its outside face for attachment of a strap. The hinge and the front clasp are blued. There is a ding in the right side of the stock, a bruise in the left side and a drag line in the left side of the cover, along with a few minor marks. There are also tiny chips in the rear edge of the stock on both sides of the hinge. There are a few handling marks and a spot of finish loss in the hinge. The shoulder stock is in about Fine to Excellent condition.

Our Assessment: The Broomhandle Model 1896 Mauser is certainly an interesting looking firearm. During the Chinese civil war in the 1920s and 30s, international arms embargoes made rifles difficult to acquire – which led to a lot of popularity for pistols with shoulder stocks. The C96 “Broomhandle” Mauser was popular, and it was copied by a number of Spanish firms for sale in China as well (in fact, the fully automatic Schnellfeuer version was initially made by Mauser specifically for Chinese sale). The .45 ACP cartridge also became popular through its use in Thompson submachine guns and the natural result was a Chinese arsenal designing and producing a copy of the C96 Mauser pistol scaled up to use .45 ACP ammunition. One popular reason for this is so the bodyguards of the warlords could have a common cartridge for use in both their pistols and in their Thompsons. Approximately 8000 Model 17 (Seventeenth Year of the Nationalist Chinese Rule starting in 1911) “Hand Cannons” were made at the Shanxi Arsenal from 1928-1931 and became so popular with collectors that another batch was made in the 1980s. This Model 17 .45 Caliber Broomhandle has all the correct markings for a pistol made in 1929, and is in the correct serial number range, but the markings on the sides appear to be pantographs instead of struck, so we are not too sure about the pedigree of this pistol. It also has import marks from the Briklee Trading Company (1992-1998), and has been professionally restored after being imported. The pistol has about 99+% of its current finish remaining and looks absolutely great. It has a mostly bright bore with very light wear in the rifling and no erosion. It even comes with a very nice wooden holster/shoulder stock. Collecting C96 Mausers can be quite an undertaking, as there are many variants (large and small ring hammers, etc.), and no C96 collection would be complete without Spanish and Chinese copies included, at least the ones made by major gun manufacturers and arsenals. Of the oddball copies, the most collectible is the .45 Model 17 “Hand Cannon” made by Shanxi, and we would think the more modern copies are better made and just as collectable as the older ones, so whether this a vintage pistol or a more modern copy, it still represents a very interesting development in pistol manufacture.