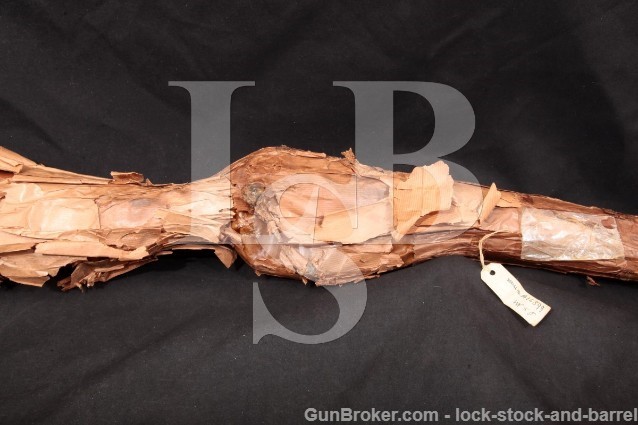 Overall Condition: The rifle comes in its original long term storage packing paper& cosmoline. The rifle appears to be in Excellent / Unissued condition.

Mechanics: The bolt is in place but we did not cycle the action.

Box, Paperwork& Accessories: The rifle has a magazine in place. We did not view the magazine.

Our Assessment: This Enfield No.4 Mk2 is in its original long term storage paper & cosmoline “mummy wrap”. It was made at the Royal Ordnance Factory (ROF) Fazakerley in 1955 and was placed into storage shortly thereafter. It has been kept in this condition by the owner for collector value. Many collectors prefer that these rifles be left in their long term storage paper & cosmoline “mummy wrap” as it adds value to the rifle. From its appearance, we believe the rifle to be in unissued condition. This unissued Enfield should be in pristine condition once unwrapped and cleaned…If you choose to do that.