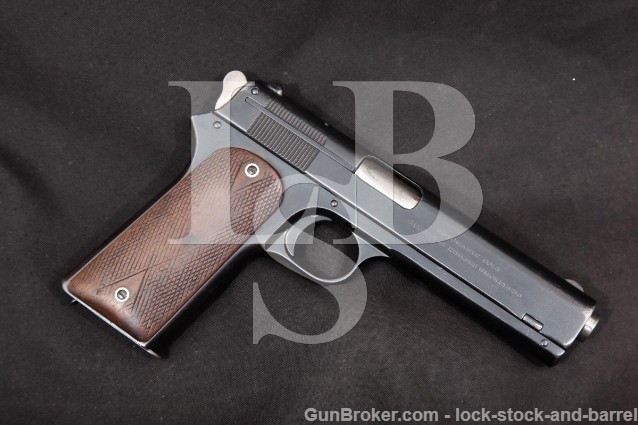 Stock Configuration & Condition: The grips are checkered walnut with smooth diamond patterns around the grip screws. There is a crack from the top of the left grip to the upper grip screw and a repaired crack down the entire length of the left grip near the front of the grip. The checkering shows heavy wear worn smooth in spots with shallow bruises in both grips and several dings in the right grip. The grips are in about Fair to Good overall Condition.

Type of Finish: The pistol has a blue finish. The hammer is “In The White” and was probably case colored originally.

Bore Condition: The bore is gray with shallow rifling. There is light erosion the length of the bore.

Overall Condition: This handgun retains about 96% of its current metal finish. We think the frame and slide were lightly bead blasted prior to being finished. There are drag lines, a few tiny dings and spots of light pitting under the finish of the slide and small dings under the finish on the right side of the frame. There are also a few spots of pinprick surface erosion through the finish on the left side of the slide. There is finish loss on the front edges of the slide and frame and light handling marks scattered over the underside of the frame, front strap, and backstrap with a small mark through the finish in the front strap.  The hammer knurling shows light wear and the slide serrations are sharp. The grip screws are sharp. The slide markings are shallow and some of the patent dates are unreadable. Overall, this handgun rates in about Good condition as refinished.

Mechanics: The action functions correctly and the slide is tight to the frame. This pistol does not have a safety other than a half-cock position on the hammer. The magazine release is on the bottom of the butt. We did not fire this handgun.

Box, Paperwork & Accessories: This pistol comes with one blued seven round magazine that has been refinished. The body shows thinning and deep scratches under the finish on its sides and finish loss on the spine from rubbing on the frame. The magazine is in about Fine condition as refinished.

Our Assessment: The Ordnance Department of the U.S. Army convened a board of two men, Capt. John t. Thompson and Maj. Louis A. La Garde to determine a minimum handgun caliber for use by the U.S. Military in 1903. In 1904, a month before the report was released, Union Metallic Cartridge Company (U.M.C.) received “figures for the proposed ctgs. UMC began work on cartridges, and shortly thereafter Colt set to work experimenting on a .45 caliber pistol based on their 1902 Military model. U.M.C. came up with a rimless .45 cartridge that they were producing by April 1905. Meanwhile, Colt had John M. Browning try to figure out how to handle the stresses caused by higher powered cartridges using the M1902 pistol as a baseline. By May 1905, Browning had applied for a patent covering a new barrel design with locking lugs on the bottom to lock it to the frame. In 1907, Army tests began on guns from 8 different manufacturers, which was narrowed down to Colt’s Model 1905 and pistols from Savage and Luger. Changes were requested, and Colt came up with a prototype of the new Model 1907 by Sept.1907. Only about 207 of this new model were made, making them some of the most desired collector guns in the world.”. Further modifications resulted in the Model 1911, which was adopted by the Army and is still in use until this day as the M1911-A1. Although the M1905 wasn’t adopted by the Army, about 6200 were made and sold commercially except for those used in government testing. The oil polished mirror finish Colt put on the pistols, with a fire blue finish on the smaller parts, made them very desirable. This M1905 pistol was made in 1907. It has been refinished and has about 96% of its current finish remaining. The bore is gray with shallow rifling and light erosion the length of the bore. The slide is tight to the frame. The pistol seems to be in great mechanical condition for its age.  This model, along with its M1900 and M1902 predecessors, is a must-have amongst Colt collectors as being the first of the large framed Colt semi-automatics. As only about 6200 of the M1905 pistols were made, they become even more desirable. We expect the collectors of Colt autos are going to be very interested in this pistol.