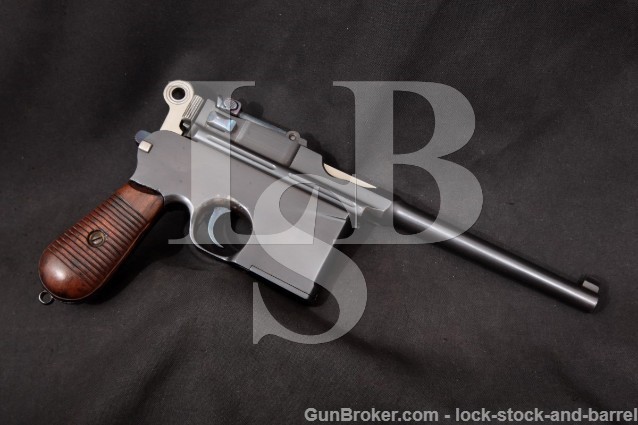 Markings: The top of the barrel’s chamber ring is marked “TAKU NAVAL / DOCKYARD”. The top rear of the barrel extension, the top of the bolt, the right side of the trigger and the rear faces of the hammer, lock frame and frame are marked “390”. The inside surfaces of the grip panels are also marked “390”. There are Chinese characters arranged in a circular pattern on the left side of the magazine with seven characters arranged in an arc above the circle. There are also two marks in the trigger guard just behind the magazine floorplate.

Sights / Optics: The front sight is a blade fixed to the barrel that resembles an inverted “V” when viewed from the rear. The rear sight is a “V” notched sliding elevator tangent sight marked from “50” to “1000”.

Stock Configuration & Condition: The grips are grooved walnut with 17 grooves and brass grip screw escutcheons. There are a few dark spots of oil staining in the grips. There are wear marks and/or dings in the bottom rear inside edge of the right grip, creating a small gap between the grip and the grip frame. There is a shallow circular ding in the smooth bottom area of the right grip and tiny tool marks around the grip screw escutcheons. The edges of the grooves are sharp. The left grip is shy of the metal in the front strap and backstrap in the bottom half of the grip. The grips rate in about Fine overall condition.

Type of Finish: The pistol is blued. The rear sight slider, safety, trigger and bolt stop have a fire blue finish. The hammer, bolt and lock frame are “In The White”.

Finish Originality: The finish has been professionally restored.

Bore Condition: The bore is gray with moderate wear in the rifling. There is light erosion scattered throughout the bore with a few spots of moderate erosion near the muzzle.

Overall Condition: This handgun retains about 99% of its current metal finish. There is pitting under the finish around the top of the right grip and in the sides of the frame around the trigger guard opening. There is also thinning on the edges of the bolt stop and spots of finish loss on the right side of the frame around the trigger guard opening. The hammer serrations show moderate wear and the safety serrations show very light wear. The screw heads are sharp and the markings are clear. Overall, this handgun rates in about Fine condition as restored.

Mechanics: The backstrap has been slotted for a shoulder stock and there is a lug on the bottom of the frame for a lanyard ring. The action functions correctly. This pistol has a new style safety that can be engaged or released without moving the hammer. We did not fire this handgun. As with all used firearms, a thorough cleaning may be necessary to meet your maintenance requirements.

Our Assessment: The Chinese were particularly enthused with the Mauser C96 “Broomhandle” in 7.63 mm Mauser, a gun that could be used as a traditional pistol or, when fitted with its detachable stock, as a short-barreled carbine. The cartridge was potent and the guns very reliable. Best of all, as handguns had been specifically exempted from the Arms Embargo of 1919, the C96s could be legally sold by any of the countries (except Germany) that had signed or supported that legislation. From 1916 to 1936, about 300,000 such Mausers made their way into China. Some were surplus from World War I; the majority were newly manufactured, some of which were clones made by the Spanish firms of Astra and Beistegui Hermanos. In 1916, China was home to 29 arsenals, about 8 of which had the machinery to produce armaments. As the warlords’ need for weapons grew, additional facilities were added and existing plants were enlarged. The Hanyang, Arsenal, the Taku Naval Dockyard Arsenal and the Taiyuan (Shanxi) Arsenal were some of the largest. This pistol was made by the Taku Naval Dockyard Arsenal. The early Type I had a milled panel frame with arsenal markings on the right side and the Type II, made from 1928 to 1933, was a Flatside pistol with markings on the left side. About 3500 Type II pistols were made. This Type II pistol has been professionally restored and is in about Fine condition with 99% of its current finish remaining. With only 3500 of these having been made, we expect the collectors of C96 Broomhandles and collectors of pre-WWII Chinese weapons to be very interested in this pistol.