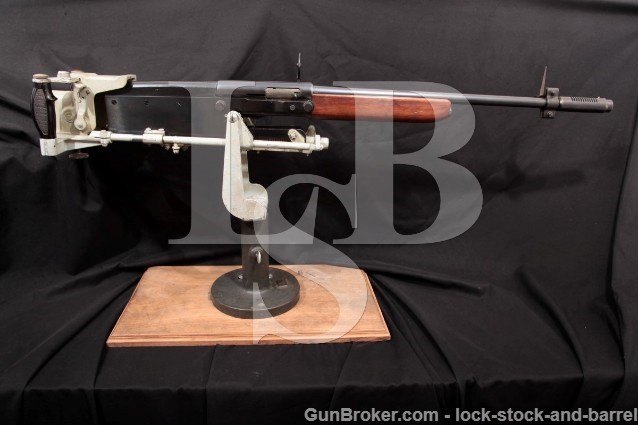 Sights / Optics: The Cutts compensator has a bead at its front. Mounted to the left of the barrel behind the compensator via a clamp is a tall tapered post front sight. There is a mounting point welded to the left of the cradle mount at the receiver with a tall post with a ball at its point and a ring surrounding it held in place with a set screw.

Stock Configuration & Condition: The forend is smooth walnut with an oil finish. The forend has a few light compressions. There are no chips or cracks. Overall, the forend is in about Fine-plus condition.

Overall Condition: This shotgun retains about 95% of its metal finish. There are a few scattered light freckles, some light operational wear and light handling marks.The markings are clear. Overall, this gun rates in about Fine condition.

Box, Paperwork & Accessories: This shotgun comes with a Bell Aircraft cradle mount with 360° traverse, approximately 80° elevation and approximately 70° depression. The cradle mount has two vertical plastic handles with side checkering and one finger groove separating the index finger from the middle finger. Positioned in front of the right handle is a trigger which when pulled rotates a bar with a gear on the inside which turns another gear pulling a rod to the rear which pulls the shotgun’s trigger. The shotgun is mounted to the cradle via bolts at the front and rear of the receiver. The cradle mount has scattered light finish loss and operational wear. The grips have scattered light marks with a spot of marring on the rear of the left grip. There are no chips or cracks in the grips. Overall, the cradle mount is in about Very Good condition. Also included is an iron base for mounting the piece to the ground or to a structure or vehicle.

Our Assessment: The Remington Sportsman model shotgun shares the same basic action as the Remington Model 11, The Browning A5 and the Savage 720. Like all of those shotguns, it has also seen some military use, though few were used in the same manner as this one. At the outbreak of WWII, the United States had to train thousands of personnell in a new skill which has few civilian parallels, aerial gunnery. Trainees would start with skeet shooting, using complete shotguns, but would steadily progress. This shotgun is an example of one used in later stages when both the gunner and target would be moving. A mock fuselage would be fabricated on the back of a truck and the cradle mount would be installed as though it were in the aircraft. The trainee would then engage flying targets while the truck was moving. This is essential for aerial gunners as, unlike normal trap, skeet and sporting clays, they will encounter targets which are not only moving away, towards, or across from them, but they will themselves be moving relative to the point at which they actually fire. This shotgun is not just a cool piece of history, it was a vital training aid for the gunners of the Army Air Corps as they learned how best to defend themselves while they passed over Africa, Europe and the Pacific in aluminum skinned, slow moving, large-bodied aircraft. This example was produced in early 1944 and is in Fine condition with 95% of the gun’s finish remaining and the cradle mount in Very Good condition. Military shotguns themselves are scarce when compared with rifles and handguns, but this is a rare opportunity to own a rare military shotgun which is a piece of history as well as having served a vital role in the U.S. war effort during WWII. Please see our photos and good luck!