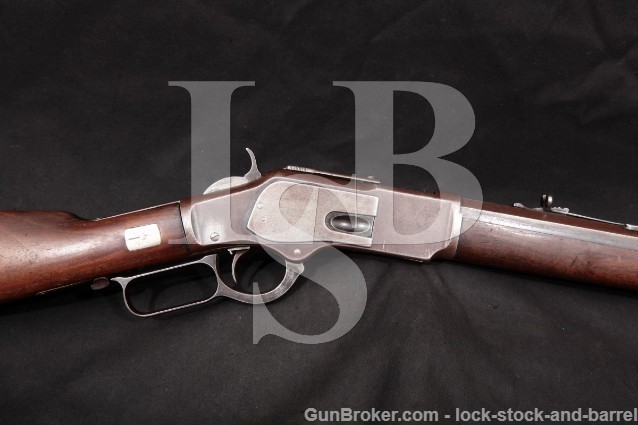 Serial Number: 139881(The “A” suffix found on the lower tang is technically not part of the serial number but Winchester’s method of tracking the specific mechanical configuration of the receiver group.)

Stock Configuration & Condition: The stocks are two-piece walnut. The buttstock has an oiled finish and the forend has remnants of a lacquered finish. The buttstock has a straight grip and a blued crescent shaped steel buttplate, and the forend has a steel nosecap. The stocks are dark with oil staining around the metal parts. The forend has obviously been refinished after chip losses, as it is not tall enough by at least 1/8” on each side. The buttstock is shy of the metal along the edges of the upper tang and at the toe. There are two cracks extending back from the back edge of the upper tang, one on each side of the comb, and there is a rectangular piece of aluminum inlet into each side of the wrist and pinned, perhaps to strengthen the wrist. There are several dings and bruises in the forend, and a few dings and drag lines in the buttstock. The LOP measures 12 7/8” from the front of the trigger to the back of the buttplate. The buttplate is developing a dark patina, with light wear at the heel and toe, light erosion and a few dings. The buttplate is in about Good condition. The stocks rate in about Fair to Good condition.

Type of Finish: The rifle shows a thin plum colored patina forming remnants of a blued finish, with a darker patina formed on the lever and hammer.

Bore Condition: The bore is dark with heavy wear in the rifling. There is light erosion throughout the bore with moderate erosion in the bore from the muzzle back several inches.

Overall Condition: This rifle retains about 10% of its metal finish. There is a light plum colored patina forming over the surfaces, with bluing remaining only in the protected areas, and a heaver patina formed over the lever and hammer. There is light pitting in the nosecap and light to moderate erosion in the receiver and its sideplates, with a sprinkling of light erosion in the barrel and magazine tube. There are several tiny dings in the barrel and a sharp ding (i.e. small dent) in the bottom of the magazine tube, with light handing marks scattered over the surfaces. There are tool marks around most of the screw heads in the receiver and its sideplates, and a few drag lines in the receiver. The hammer knurling shows light to moderate even wear. The screw heads are disfigured and the markings mostly clear, but partially obscured by handling marks and wear, with possible wear in some of the dies. Overall, this rifle rates in about Good condition.

Mechanics: The action functions correctly. We have not fired this rifle. The hammer has a half-cock safety position, there is a lever lock on the lower tang, and a dust cover on the receiver that slides on an integral rail typical of the Third Models. As with all used firearms, a thorough cleaning may be necessary to meet your maintenance standards.

Our Assessment: Per Wikipedia: “One of the most successful, and certainly one of the most famous Winchester rifles was the Winchester Model 1873, known as “The Gun that Won the West” for its predominant role in the hands of Western settlers. The Model 1873 had a steel frame that was much stronger than the brass framed Model 1866, allowing Winchester to develop a family of powerful new cartridges, with Colt usually producing Single Action Army revolvers in the same calibers shortly after they were developed. The .44-40 Win. cartridge, also known as the .44 WCF, was introduced by Winchester in 1873 as Winchester’s first metallic centerfire cartridge. Colt produced a single action revolver chambered for this cartridge in 1877. Through law enforcement use and hunting, and made popular through its dual use in rifle and pistol, the .44-40 soon became the most popular cartridge in the United States. It led to the M1873 Winchester being called “The Gun That Won The West”, and has the reputation of killing more deer in the United States than any other save the .30-30 Winchester.”. This Model 1873 rifle was made in 1883 and has a 23 5/8” octagon barrel and a crescent shaped buttplate. The forend has been refinished after some chip loss and the buttstock, which has been repaired in the wrist, has been sanded and refinished. The rifle is in about Good overall condition. This rifle is 135 years of age, and still has a functioning action and a shootable bore, with remnants of its original blued finish, so we sure it will find a home in a collection somewhere.  It deserves a spot in a collection of lever action rifles next to its 1866, 1876, 1892 and 1894 cousins.