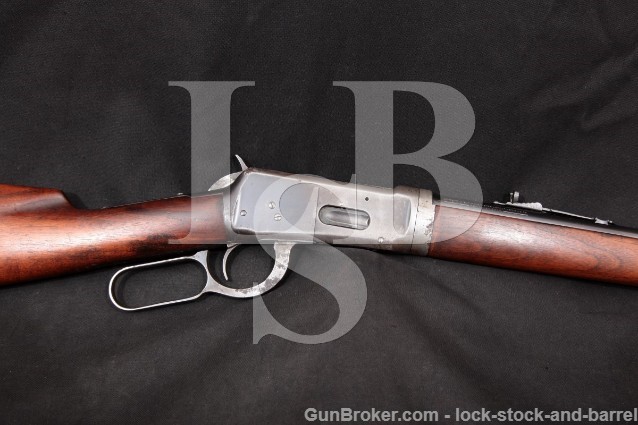 Sights / Optics: The front sight is a brass beaded Lyman blade, in a base that is dovetailed to a stepped base , integral to the barrel. The rear sight is a Marble’s brand “U” notched leaf with a rear white diamond shaped sighting reference, the leaf is micro-adjustable for elevation, on a slide-step elevator base, which is dovetailed onto the barrel.

Stock Configuration & Condition: The stocks are a smooth two piece walnut set. The forend has a metal nose cap that houses the threaded magazine tube. The stocks have crisp fit to the metal, there are dark splatters on the right of the forend and right of the wrist, which looks to be as old as the wood itself, oil staining is seen on both stocks, along with scattered scuffs and scrapes. There are extremely thin surface cracks by the tangs, which barely gain notice until close inspection. No major damages are seen. The LOP measures 13 ¼” from the front of the trigger to the back of the serrated metal shotgun-style butt plate; the plate has scabs of erosion and areas of mild pitting, a small amount of blue remains on the rear face, it rates in Good condition. The stocks rate in about Very Good Plus overall condition.

Bore Condition: The bore is bright and the rifling is sharp; our bore gauge gave an M.E. of about -1, there is no evidence of extended firing outside of factory testing. There is no visible erosion.

Overall Condition: This rifle retains about 77% of its metal finish. The tube magazine, lever, receiver and muzzle have areas of pitting and rub removal of the finish; these surfaces show general handling marks and a few deeper bruises. The receiver extension is down to bare metal for the most part, the flanks of the lever have heavier scabs of erosion and abrasive cleaning marks that polished the surfaces. The upper tang’s screw spins freely in the hole, the nose cap has heavier rubbing, its left screw head is slightly askew from fitting flush with its surrounding metal. The rifle has rubbing on the edges consistent with scabbard or extended storage but it gleans an image of what the rifle’s life may have consisted of. The bluing is still deep in tone, areas near the heaviest rubbing have browned patina. The tang sight screws are mildly distressed but still serviceable, the balance of the screw slots are sharp with only faint evidence of tooling. The markings are crisp. Overall, this rifle rates in about Very Good Plus condition.

Mechanics: The action functions correctly. The rifle has a 3 round removable tube magazine, which allows the rifle to be taken down in seconds for maintenance and storage. The lever is smooth, the trigger is crisp. This rifle features a half cock and lever safety. We have not fired this rifle. As with all previously owned firearms, a thorough cleaning may be necessary to meet your maintenance standards.

Our Assessment: As paraphrased from americanrifleman.org: “By the early 1920’s, the Winchester Model 94 rifle was losing sales, and in 1924 Winchester introduced an “updated” version of the Model 94 rifle dubbed the Model 55. The Winchester Model 55 was a rifle with a 24-inch barrel, an integral ramp front sight and a half-magazine that held three cartridges. It was initially chambered only in .30-30 Win., but .25-35 Win. and .32 Win. Spl. were added in 1926. For the first few years, the Model 55 carried its own set of serial numbers; however, in 1926, around serial number 2,865, the Model 55 reverted to serial numbers within the already established Model 94 range. The earliest guns were made as takedowns, and in 1930, solid-frame Model 55s were made available. Extra-order options, such as shorter or longer barrels, double-set triggers and half-octagon barrels, are known to exist. In 1932, with approximately 20,500 guns made, the Model 55 was discontinued to make way for the Winchester Model 64.”. This rifle was made in 1929, the year of “Black Friday” and the start of America’s Great Depression era. This rifle has signs of continuous, old and honest handling, though the bore remains as tight and bright as the day it left the factory, it was most likely used for intimidation factor, as we don’t see signs of firing very often outside of the factory; ammunition would have been either scarce or nearly impossible to acquire for a good portion of America during this time. This unique takedown rifle’s stocks are gorgeous, their fit to the metal is tight and its overall veteran swagger has us guessing it will go to a collector of fine Winchesters.

The rifle takes down properly.