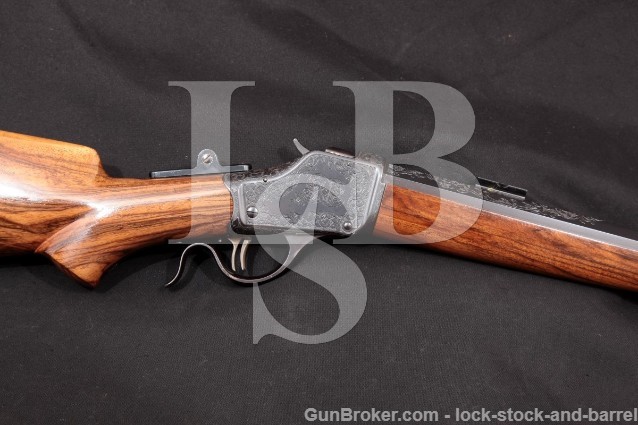 Year of Manufacture: The rifle was originally manufactured in 1889. We don’t know when it was restored.

Barrel Length: The heavy half-round half-octagon barrel has a recessed target crown, is 30” in length and measures 0.810” in diameter at the muzzle.

Sights / Optics: The front sight is a globe with replaceable inserts that is dovetailed into the top of the barrel. The current insert is a thin walled donut held in the center with 4 whiskers, one every 90 degrees. There are two male dovetails mounted on the barrel for mounting a scope, and a base for a Soule type tang sight mounted on the upper tang. There are also 5 drilled, tapped and filled holes in the top of the round part of the barrel for additional sights.

Stock Configuration & Condition: The stocks are two-piece smooth fancy walnut with a satin finish. The wood is beautiful, so please see our pictures! The buttstock has a pistol grip and a solid red rubber recoil pad with black spacer marked “WINCHESTER”. The forend has a Schnabel tip with a wedge shaped ebony insert. There are multiple small dings in the sides of the wrist, with a drag line on the left side of the wrist. There are several dings and light drag lines in the buttstock, with a few scratches on its left sides. There are two dings in the underside of the forend and two drag lines on its right side, along with several smaller marks. The LOP measures 13 ¼” from the front of the forward trigger and 13” from the front of the rear trigger to the back of the recoil pad. The pad shows moderate wear at the toe, and is still slightly pliable on its edges. The recoil pad is in about Fine condition. The stocks rate in about Fine overall condition.

Type of Finish: The rifle has been professionally restored with a blue finish, and elaborate scroll engraving on the barrel and receiver.

Bore Condition: The bore is bright with very light wear in the rifling. There is no erosion in the bore, but there are a few light tool marks near the muzzle.

Overall Condition: This rifle retains about 97% of its current metal finish. There are a few small dings and light scratches in the underside of the barrel and a small scratch through the finish in the upper left shoulder next to the front scope mount. There are a few more tiny marks in the barrel, a mark through the finish in the lower tang from rubbing on the lever, and thinning on the back edge of the lever and on the scope mounts. The edges of the barrel are sharp and the engraving is crisp. The hammer knurling shows moderate to heavy wear. The upper tang screws are disfigured but the remaining screw heads are sharp. The barrel markings have all been ground off or covered with engraving and the markings on the lower tang are readable but very shallow. This rates in about Fine condition as restored.

Mechanics: The action works correctly. The hammer does not have a half-cock position. The hammer is somewhat stiff. The double set triggers have an adjustment for trigger pull, and when the rear is set, the front trigger breaks crisply at 4.5 ozs. The lever locks-up solidly. We have not fired this rifle. As with all used firearms, a thorough cleaning may be necessary to meet your maintenance standards.

Our Assessment: This is a Winchester Model 1885 High Wall rifle that has been professionally restored. It has what appears to be its original fancy walnut stock, complete with ivory tipped forend and a vintage solid red rubber Winchester recoil pad. The half-round half-octagon barrel and the receiver have been elaborately scroll engraved and refinished. Please see our pictures to get a better idea of how beautiful this rifle really is!! The rifle is chambered in .40-65 Winchester, a cartridge first introduced in1887 to “put a little more steam” in repeating rifle cartridges. In the modern era, it has gained popularity in BPCR silhouette matches as a low-recoil alternative to the more common .45-70 Government. This rifle has a globe front sight, scope mounts on the barrel and a mount on the upper tang for a Soule sight, as well as double set triggers. When they were first manufactured, the John Browning designed Model 1885 rifles were deemed stronger than the prior Sharps rifles, and the different sight and trigger options available made them an instant hit with hunters and target shooters alike. From Wikipedia: The Model 1885 rifles were targeted at competitors in “Match Shooting”, a sport which was extremely popular from about 1871 to 1917. The Winchester rifles challenged the Sharps, Remington, Maynard and Ballard rifles, and quickly became known for their reliability and accuracy. Major Ned Roberts, inventor of the .257 Roberts cartridge, described the Model 1885 as “the most reliable, strongest and altogether best single shot rifle ever produced””. This completely restored rifle is in about Fine Plus condition with about 97% of its current finish remaining. The bore is bright with very light wear in the rifling and no erosion. Its restored finish and scroll engraving may turn-off some of the serious collectors, but its overall condition still makes it collectable. It should also be popular with the shooters – it’s not every day that you come across a single shot rifle that looks this nice. The wood and engraving are beautiful, so please see our pictures!! The .40-65 Winchester cartridge can be loaded with 260 grain bullets, giving it enough knock-down power for the rams in BPCR silhouette matches, and the rifle should also be perfect for SASS Long Range Rifle competition.

CA Legal or CA Private Party Transferable: This Antique rifle can be sold/transferred in California.