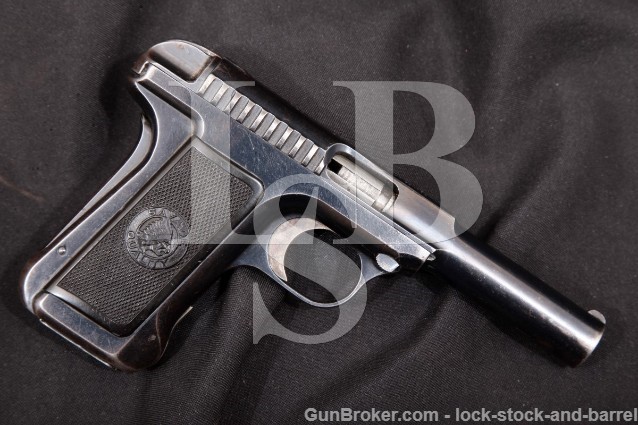 Stock Configuration & Condition: The grips are black checkered hard rubber with the “Savage Quality” Indian Head logo on each side. There are several light handling marks in the smooth borders. The checkering shows light wear with a tiny spot of discoloration in the grooves near the bottom of the left grip. The grips rate in about Fine Plus overall condition.

Type of Finish: Blued. The trigger and magazine release are case colored.

Bore Condition: The bore is gray with light wear in the rifling. There is microscopic erosion in the grooves of the bore and a slight bulge about half-way down the bore which shows moderate erosion.

Overall Condition: This handgun retains about 75% of its metal finish. There is finish loss from holster wear at the front of the slide, the slide serrations, the top rear of the slide, the front edges of the frame and the edges of the grip frame. There are small scratches and tiny marks through the finish in the barrel, scratches in the slide release and light handling marks scattered over the slide and frame. The slide serrations are sharp. The knurling on the safety shows moderate wear and the knurling on the magazine release is sharp. The markings are clear. Overall, this handgun rates in about Very Good condition.

Mechanics: The action functions correctly. It has a frame mounted safety and a grip safety. The slide is tight to the frame. We did not fire this handgun. As with all used firearms, a thorough cleaning may be necessary to meet your maintenance standards.

Our Assessment: This Savage Model 1915 pistol is very similar to the original Model 1907 except that it does not have a cocking piece. The Model1915 was made in both .32 ACP and .380 ACP, with the .32 ACP version made from 1915-1916 and the .380 ACP version made from 1915-1917. Only about 3900 of the .380 ACP version were made, and like the Model 1907 uses no screws – even the grips snap on. The design of the Model 1907 and 1915 pistols was based on the .45 Caliber pistol Savage submitted to the 1906-1911 Army trials. The Model 1907 was one of the first pistols to use a double-stack magazine and it is its subsequent variants were advertised with the slogan “Ten Shots Quick!”. This pistol is in about Very Good condition with about 75% of its original finish remaining. The bore is gray, with a slight bulge about half-way down the bore that shouldn’t affect the accuracy of this pocket pistol. This is a cute little pistol that certainly isn’t “just another Browning copy”. It is a shame the early Savage pistols never gained the same collector status as the Colts, for this is a very unique and rare pistol that deserves a spot in a collection alongside its Colt and Browning cousins. Still, it is rare and we expect the Savage collectors to be very interested. If it gets past the collectors, it will make someone a great pocket pistol, and will also fit those with small hands.

The cartridge indicator is missing.