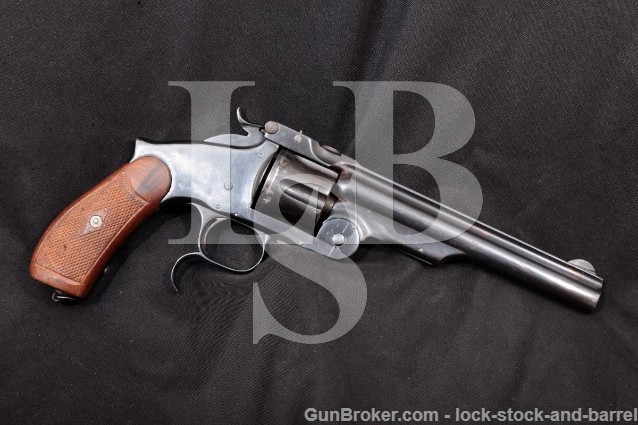 Barrel Length: The barrel has a full-length top rib and is 6 ½” in length.

Sights / Optics: The front sight a thin half-round blade welded to the stub of the original front sight which was fixed to the top strap.

The rear sight is a “U” notch fixed to the front of the barrel latch.

Stock Configuration & Condition: The grips are checkered aftermarket hardwood on a round-butt grip frame. There are a few dings in the smooth borders, with wear marks at the top of the left grip. The checkering shows light to moderate wear with a few tool marks around the grip screw in the left grip. There are a few small mars in the checkering. The grips fit the grip frame well. The grips are in about Very Good Plus overall condition.

Type of Finish: The finish is blued. The original finish was nickel plated, from the traces seen on the sides of the grip frame.

Finish Originality: The revolver has been refinished.

Bore Condition: The bore is dark and the rifling is shallow. There is light to moderate erosion scattered throughout the bore with heavy erosion near the muzzle.

Overall Condition: This handgun retains about 94% of its current metal finish. There is pitting and grinding marks under the finish in most areas. There are a few light handling marks, tiny dings and spots of thinning in the surfaces. There is also a stripe down the left side of the barrel and another on the left side of the top strap where the bluing wasn’t applied evenly. The cylinder has a drag line through the finish. The barrel latch knurling shows moderate wear and the hammer knurling shows heavy wear. The screw heads are relatively sharp. The barrel markings and the serial number and date on the butt are clear, but the cylinder markings are shallow. Overall, this handgun rates in about Fair Plus condition as refinished.

Mechanics: The star on the ejector appears to have been brazed and then re-cut. The bushing at the front of the cylinder is cracked (or perhaps this is supposed to have a tiny lengthwise slot in its front circumference?). The star moves out of the cylinder to eject the cartridges, and drops back down when the barrel is opened fully, but does not snap down and must be pushed back in – we think there is a spring missing. The firing pin is cracked on its top edge at the front face of the hammer, and the firing pin has a small amount of up and down movement. The barrel lockup shows a small amount of play and there is a fair amount of play in the cylinder lockup. The single action trigger has a tiny step in it if the trigger is squeezed slowly but isn’t felt if the trigger is pulled sharply. Otherwise, the action works correctly. We did not fire this handgun. As with all used firearms, a thorough cleaning may be necessary to meet your maintenance standards.

Our Assessment: When Smith & Wesson began making centerfire top break revolvers in 1870, they named the large framed .44 Model “No. 3”. This was followed by the .38 Model No. 2 in 1876 and the .32 Model No. 1 ½ 1878, based on frame sizes, not date of manufacture. All were made first in single action, and later double action models were added. The single action versions of the Model 3 were made in four distinct groups: Americans, Russians, Schofields and New Models. The Russian models are distinguished by having a round butt grip frame with extreme knuckle, a barrel latch mounted on the top strap vs. on the frame, and were in .44 caliber with 6 ½ or 7” barrels. This is a S&W No. 3 Russian 3rd Model, with a 6 ½”  barrel chambered in .44 S&W Russian. In addition to the Commercial models, there were several Russian contracts, all beginning with Serial No. 1. This revolver has a low four-digit serial number, but the “Reissue” patent date on the barrel identify it as one of 9000 new and old model commercial revolvers with that marking. The pistol has been refinished in blue and is in about Fair Plus condition. The S&W top break revolvers were made in so many models, sub-models and variants, it is almost impossible for a collector to acquire one of each, making all of the models collectable. There were about 13,500 3rd Models manufactured, with less than 9000 having the “Reissue” barrel marking, making this revolver somewhat rare.  S&W top break collectors not already having one of these revolvers in their collection will want to bid on this one, even if it is to be only a place holder until they can find a better one, an opportunity that may not come along for years.

CA Legal or CA Private Party Transferable: This Antique handgun CAN be transferred/sold in California. All cartridge firing handguns (even C&R’s and antiques) sold to a California resident must be DROS’d. This does not apply to out of state residents.