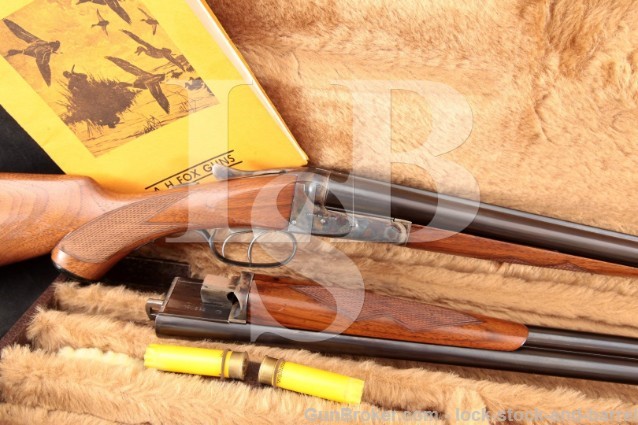 Action Type: Top-Break Side by Side with Automatic Extractors

Sights / Optics: Both barrel sets are mounted with a steel bead attached to a serrated solid rib.

Stock Configuration & Condition: The buttstock is checkered hardwood with a smooth textured pistol grip cap. There are few light compression marks throughout the buttstock. The buttstock does not have any cracks or chips. The two splinter forends have a couple of minor compressions. Neither has any cracks or chips. The stock has likely been restored as there are portions proud of the steel and portions obviously shy of the steel. The drop at heel measures 3 1/8″. The drop at comb measures 1 1/2″ The LOP measures 14” and 13 1/4″ from the front of the triggers to the back of the still buttplate. The stocks rate in about Excellent overall condition as restored.

Finish Originality: The A.H. Fox marked 26″ barrel set has likely been professionally refinished, possibly by Savage who would have been the Fox “Factory” at the time the second barrel set was purchased. This is indicated by a small patch of erosion on the rear of the rib and the barrel extension which have finish over the erosion. The 28″ barrel set appears to have original finish. The similarity in finish between the second splinter forend and the original and receiver indicates that the original forend and receiver may have been refinished as well. Again, if the refinish was performed by Savage, this would a “factory refinish” as Savage owned Fox at the time the second barrel set was purchased.

Bore Condition: All bores are bright and all bores have light erosion just in front of the chambers.

Overall Condition: This shotgun retains about 99% of its metal finish. The balance of the finish shows light thinning of the receiver at the edges of the breech face and a couple of knicks on the bottom of the 26″ barrel set. The screwheads are sharp with light tool marks on the pistol grip cap screw, the screw under the thumb-lever, and the buttplate screws. The markings are clear. Overall, this shotgun rates in about Excellent condition as restored.

Mechanics: The action functions correctly. We have not fired this shotgun.

Box, Paperwork & Accessories: Hard-sided leather case with lined interior. Separate sections of the interior for each barrel set, each forend, the receiver with a velcro strap to secure receiver, and another long, thin section bisected by a wooden block. This block has two elastic loops each containing a spent 20 GA shell. Also included is a 20 GA pull-through mop and an A.H. Fox Guns catalog which appears to have come with the second barrel set as it is marked inside “MADE BY / SAVAGE ARMS CORPORATION / UTICA, N.Y., U.S.A. / EXECUTIVE AND EXPORT OFFICES / 100 EAST 42nd STREET, NEW YORK, N.Y.” and the back cover is marked “Reprinted as Reference Material / R&A MOULTON / 1560 Suite 1 Box 65 / Turlock, CA. 95380 / All Rights Reserved”. The portions of the interior in contact with the rears of the barrel sets have some wear as does the exterior of the case. The top face of the case has been covered with an additional sheet of leather, perhaps to cover damage. The bottom edge of the case on the latch side has a series of tears to the right of the carry handle. Overall, the case is in Good condition.

Our Assessment: This is a fine example of a quality made affordable shotgun from the beginning of the 20th century. A.H. Fox  Gun Company offered the first double barrel shotgun produced in America with a receiver specifically designed for the smaller 20 gauge shell. It was great for hunting then and it could still be used as a hunting shotgun now, if desired. Also interesting is its second barrel set which dates from approximately 16 years later. Given that the second barrel set and forend are serialized to the gun and that the forend and receiver finishes match so closely, it is possible that the whole shotgun was sent back to Savage for restoration and the additional barrel set was purchased at that time. This beautiful set has as future as bright as its history is interesting. Please see our photos and good luck!