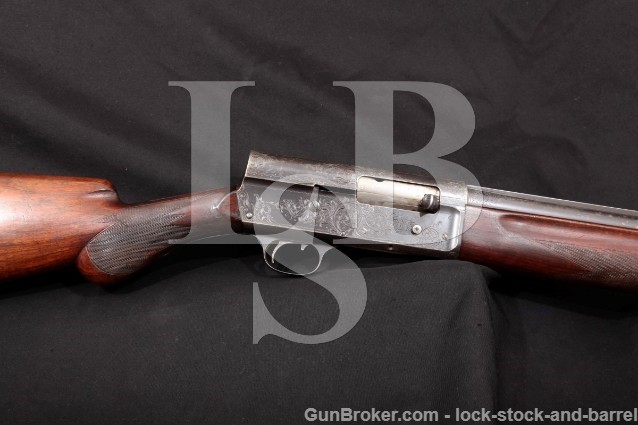 Sights / Optics: This shotgun is mounted with a steel bead at the front of the rib. The top of the rib and receiver are serrated to reduce glare.

Stock Configuration & Condition: The stocks are a two piece checkered walnut set. The forend has finger grooves on each side at the top and checkering underneath. The butstock has a round-bottom checkered pistol grip with no buttplate. The forend has some light-moderate compressions and bruising scattered toward the rear with a crack on the front face from the magazine tube hole up to the top edge under the barrel. The buttstock has several scattered light-moderate compressions, scratches, drag-lines and scattered light wear. There are no chips or cracks in the buttstock. The LOP measures 13 3/4” from the front of the trigger to the back of the stock. There are two 1″ wide 4″ deep holes drilled in the butt. The stocks are in about Good condition as missing a buttplate/pad.

Bore Condition: The bore is bright. There is light erosion just in front of the chamber.

Overall Condition: This shotgun retains about 65% of its metal finish. The finish is thinning at all edges. The barrel has light operational wear where it contacts the forend during cycling, a few scattered light marks, and scattered spots over the forend which appear to be from surface oxidation which has been scrubbed out. The receiver has a few scattered light marks and scratches with light freckling scattered throughout and handling wear in the top and bottom tangs. The trigger guard assembly has a few light marks, mostly from loading at the front and handling wear in the bottom tang. The screw heads are tool marked with strong slots. The markings are clear and crisp. Overall, this shotgun rates in about Good-Very Good condition.

Our Assessment: John Browning presented this design (which he called his best achievement) to Winchester, where he had sold most of his previous designs. When Winchester refused his terms, Browning went to Remington. Tragically, the president of Remington died of a heart attack as Browning waited to offer them the gun. This forced Browning to look overseas to produce the shotgun. It was manufactured by FN (a company that had already produced Browning-designed pistols) starting in 1902 as the Auto 5. Browning would later license the design to Remington, who produced it as their Model 11 (1911–1947). The Remington Model 11 was the first auto-loading shotgun made in the USA, originally as the “Remington Autoloading Shotgun(1905-1910)” before it was changed to the Model 11 in 1911. An interesting piece in Remington Firearm History. This shotgun is in Good-Very Good condition with about 65% of its original finish remaining and a bright bore. This example is a Tournament Grade with select walnut stocks with beautiful figuring and extensive scroll and border engraving on the receiver and the rear of teh barrel. While this is likely to end up in a collection, this shotgun should prove to be every bit the field shotgun it was when it rolled off the assembly line in the early 20th century. Please see our photos and good luck!