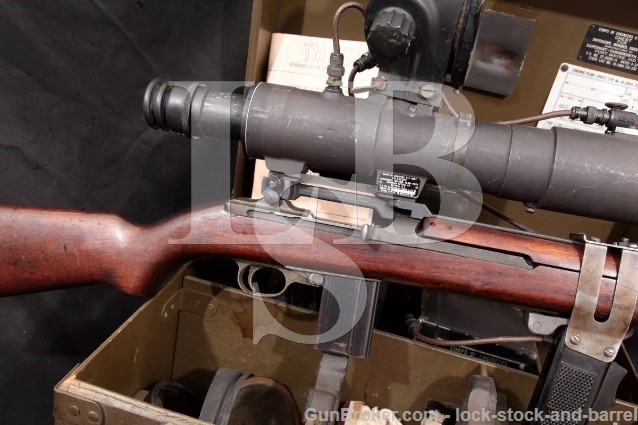 Markings: There is no visible import mark. The top of the receiver is marked “U.S. CARBINE / CAL. 30 M1” on the front and “QUALITY H.M.C. / 4797758” on the rear. The barrel is marked “INLAND MFG. DIV. / GENERAL MOTORS / 1-44”. Inland did supply barrels for Quality Hardware; see page 50 of Craig Riesch’s book, U.S. M1 Carbines Wartime Production 7th Edition. The Type III barrel band is marked “JM” which is a post WWII rebuild mark (pages 60 & 184). The top of the front sight is marked “PO-Q”, a Quality Hardware mark (page 56). The bottom of the trigger housing is marked “F”. The magazine release is marked “W” a Winchester mark (page 100). The bottom of the pistol grip is marked with a “circled P” proof. The right side of the butt is marked with a faded Ordinance Department “crossed cannons” cartouche. The sling well on the left side of the butt is marked “OI” which is an Inland mark (page 108). The rear of the magazine is marked “AI” which is an Inland mark (page142).

Stock Configuration & Condition: The two piece stock has a pistol grip, metal nose cap with sling loop, sling well, sling pass through and a metal butt plate. The buttplate shows scratches, small dents and spots of oxidation. The wood shows several scrapes, scratches and compression marks. Some are deep and have removed portions of surface wood. Most of these marks have been oiled over. The LOP measures 13 ¼” from the front of the trigger to the back of the buttplate. The stock rates in about Very Good overall condition.

Bore Condition: The bore is bright; semi-bright at the muzzle. The rifling is sharp. There is no erosion. The bore has an M.E. of 1.

Overall Condition: This rifle retains about 96% of its metal finish. The front of the barrel and front sight band show scrapes & light thinning. The receiver shows discoloration and light handling marks. The right side of the receiver shows light thinning consistent with cycling. The trigger assembly shows a few light scratches. The screw heads show some use. The markings are deep. Overall, this rifle rates in about Very Good Plus condition.

Mechanics: The action functions correctly. We have not fired this rifle. The trigger is smooth but requires a heavy pull. We have not hooked up or turned on the infrared scope assembly.

The rifle comes with accessories that are contained in a green wooden box with metal edges. The box has two information plates attached to the underside of the top. The box is missing the lower portion of one locking latch and some of the interiors foam & tape have degraded with time. The interior has several compartments, one of which has a large foam insert with cutouts for small parts. The box contains one spare bulb with its housing, the power pack, the battery assembly, and one electron tube & cardboard box marked “CAPEHART-FARNSWORTH ELECTRON TUBE”. The inside hood of the wooden box, the battery assembly and the power pack are all marked “CORPS OF ENGINEERS U.S. ARMY” and “FOR / SNIPERSCOPE INFRARED 20000 VOLTS”. A manual marked “DEPARTMENT OF THE ARMY TECHNICAL MANUAL / OPERATION AND MAINTENANCE INSTRUCTIONS FOR SNIPERSCOPE INFARED SET No. 1 20,000 VOLTS” is included. The wooden box and its accessories show discoloration, tears & handling marks. They are all in about Very Good condition. See photos for other markings and to visually confirm what is included in the auction as the set may or may not be complete.

Our Assessment: This Quality Hardware M1 Carbine has an infrared scope attached making it an M3 Carbine. It comes with the boxed kit that was provided to combat troops in Korea to convert their M1 or M2 Carbine into and M3 Carbine. This is a Rare item for an M1 Carbine or Military History collector. There is some interesting history in the development of this configuration M1 Carbine that adds to its historical value.

Here are some M3 basics from Wikipedia: “The M3 Carbine was an M2 Carbine with the M2 infrared night sight or sniper scope. The M3 did not have iron sights. It was first used in combat by Army units during the invasion of Okinawa; about 150 M3 were used on Okinawa. For the first time, U.S. soldiers had a weapon that allowed them to visually detect Japanese infiltrating into American lines at night, even during complete darkness. A team of two or three soldiers was used to operate the weapon and provide support. At night, the scope would be used to detect Japanese patrols and assault units moving forward. At that point, the operator would fire a burst of automatic fire at the greenish images of enemy soldiers. The M3 Carbine had an effective range of about 70 yards (64 meters), limited by the visual capabilities of the sight. Fog and rain further reduced the weapon’s effective range…The system was refined over time, and by the Korean War the improved M3 infrared night sight was in service. The M3 sight has a longer effective range than its predecessor, about 125 yards (114 meters). However, it still required the user to carry a heavy backpack-mounted battery pack to power the scope and infrared light. They were used primarily in static defensive positions in Korea to locate troops attempting to infiltrate in darkness. M3 operators would not only use their carbines to dispatch individual targets, but also used tracer ammo to identify troop concentrations for machine gunners to decimate.”

CA Legal or CA Private Party Transferable: This rifle is curio and relic eligible and can be transferred/sold in California. The 15-round magazine is not available to residents of California or residents of any jurisdiction that has restrictions on magazine capacity.