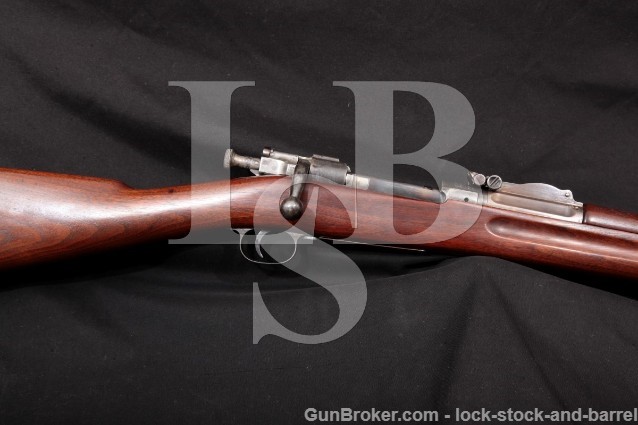 Caliber: .30-03. Developed by the United States in 1903 to replace the .30-40 Krag in the new Springfield 1903 Rifle. It was replaced after only three years of service by the .30-06 Springfield, firing a spitzer bullet giving better ballistic performance.

Markings: The top of the receiver is marked “U.S. / SPRINGFIELD / ARMORY / MODEL 1903 / 18780”. The top of the barrel is unmarked which is correct for a Rod Bayonet Rifle (pages 12 -14 of Joe Poyer’s book, The M1903 Springfield Rifle and its Variations, 3rd Edition). The safety is unmarked which is correct for this rifle (pages 12 -14). The magazine cutoff is marked “ON OFF”. The barrel bands are each marked “U”. The rear sight base is stamped with a small “Z” on the left rear and a small stamping that resembles a “T” on the right rear. The bottom of the bolt handle is marked “2”. The bottom of the bolt lug is marked “D”. These bolt markings are inspection marks or factory codes (page 230). The scallop for the magazine cutoff is stamped “S” which is a Springfield marking (page 86). The bottom of the grip is marked with a “J” and with a “circled P” proof. The left side of the stock, above the trigger, is marked with a “boxed” “JSA / 1904”. These are the inspector’s initials & the date of the stock’s production. These are correct markings for a Rod Bayonet Rifle stock. See info and photos on page 20 of Bruce Canfield’s book, An Illustrated Guide to the ’03 Springfield Service Rifle.

Sights / Optics: The front sight is a pinned blade atop the distinctive Rod Bayonet Rifle front sight base. The rear sight is a “U” notched blade attached to a fully adjustable sight escalator marked from “2-20”. An aperture is screwed to the rear of the blade. It can be rotated up to be used for sighting. This Model 1903 (M1903) sight is very similar to the M1902 Krag rear sight.

Stock Configuration & Condition: This is an early Model 1903 Rod Bayonet Rifle stock. It was originally made without reinforcing stock bolts or a nose cap. It has cutouts for the rod bayonet, rod bayonet stud & rod bayonet lug. It was also issued with a smooth metal buttplate (Poyer page 98). The buttplate has been touched up with cold blue. It has a few small areas of pin prick surface erosion showing though the cold blue. It also shows a few scuffs. The left side of the forearm shows a light scratch. The remainder of the wood shows some scuffs & a few small handling marks. The LOP measures 13 inches from the front of the trigger to the back of the buttplate. The stock rates in about Excellent overall condition.

Type of Finish: Blue. Rod Bayonet Rifles were finished by Springfield Armory with a rust blue (browning). This was a high quality time consuming process. The result was an attractive distinctive blue finish (Canfield page 21).

Bore Condition: The bore is bright and the rifling is deep. There is no erosion. The bore shows an M.E. of 0.8.

Overall Condition: This rifle retains about 94% of its metal finish. The front sight band has been treated with cold blue. Pin prick surface erosion shows through the cold blue. The front sight shows scrapes & a few small scratches. The top of the receiver shows light oxidation. The receiver & bottom metal show small scrapes. The receiver shows some thinning. The bottom metal shows discoloration from oxidation. The screw heads show light use. The markings are deep. Overall, this rifle rates in about Fine Plus condition.

Mechanics: The action functions correctly. The rod bayonet locks into place properly. We did not fire this rifle. As with all used firearms, a thorough cleaning may be necessary to meet your maintenance requirements.

Box, Paperwork & Accessories: There is a metal Type 2 oiler & thong case stored in the butt. One side contains the thong & 2 bore brushes. The other side has a dripper attached to the cap and contains no oil. The metal tube shows scrapes & some oxidation. It is in about Very Good Plus condition.

Our Assessment: This is a Rare, first year production, Springfield Armory Model 1903 Rod Bayonet Rifle. It is in Impressive shape and did we mention, Rare. These rifles were only produced from 1903 to early 1905 and most Rod Bayonet Rifles were Arsenal converted to accept a blade bayonet beginning in 1905. The rear sights, nose, handguard and even the cartridge fired were all changed over by 1910. This Model 1903 Rod Bayonet Rifle was never converted so it still has original markings and is in the proper configuration. The rifle is set in a beautiful 1904 dated stock and even has a strong bright bore. These rifles are considered unicorns because they tend to only exist in pictures or on the internet. To get our point across we will quote page 11 of Joe Poyer’s book, The 1903 Springfield Rifle and its Variations, 3rd Edition: “Many readers may question the need for detailed information on the M1903 rod bayonet rifles as they are almost nonexistent. Few rod bayonet equipped rifles were ever issued to troop and those were recalled and altered between 1906 and 1910”.

We relied heavily on Poyer’s book for information on this rifle. The rifle is in original configuration based on the information provided in his book and in Bruce Canfield’s book, An Illustrated Guide to the ’03 Springfield Service Rifle.

If you don’t have the books in our library see the information and photos over at m1903.com/rod1903/ . The following information is taken from that post: “When adopted June 19, 1903, Springfield Armory’s rifle had a rod bayonet, and fired a new rimless .30 caliber cartridge also designated Model 1903. On January 11, 1905, one week after Teddy Roosevelt’s letter to the Secretary of War, production on the “Rod Bayonet” Model 1903 Springfield was halted…On May 5, 1905 a new knife bayonet was adopted, similar to that previously used on the Krags…In July or August 1905, new sights were adopted and work began to convert rifles to the newly approved configuration. Accuracy problems at long range resulted in replacement of the 220 grain round nosed bullet with a 150 grain pointed bullet…It was decided to alter M1903 Springfield barrels to better fit the new cartridge, designated “Cartridge, Caliber .30 Model of 1906.” But known to shooters today simply as the .30-06. The massive alteration program begun a few months earlier had to start anew, and it was not until about 1908 that production of the Model 1903 rifle with alterations of 1905 for knife bayonet, and chambered for the .30-06 cartridge became routine. By 1910 nearly all of the “rod bayonet’ and 1905 conversions had been retrieved and updated. Those that escaped are very valuable collector’s items”.