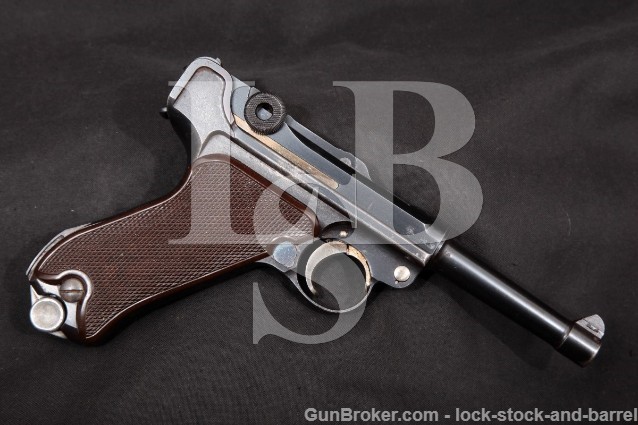 Sights / Optics: This pistol is mounted with a “V” notch in the back of the toggle and a serrated ramp front sight dovetailed into the band at the front of the barrel. The front sight presents an inverted “V” as viewed from the rear.

Stock Configuration & Condition: The grips are checkered brown plastic with a 0.150” (a little wider in spots) smooth border running completely around the grip. “Luger Variations” indicates that the 1939 Krieghoff pistols used a brown grip with coarse checkering and a 3/16” border (0.1875” wide) while the pistols made in 1940 used black plastic. However, as we have learned, there are never any hard and fast rules as to when parts get used up or get found at the bottom of a drawer. The borders show a few very light marks. The checkering shows very light wear without mars. The grips are in about Excellent condition.

Type of Finish: The pistol is blued. The locking bolt, trigger, safety and ejector have a straw-colored finish. The right side of the magazine release and the pins holding the toggles have a fire blued finish.

Finish Originality: The finish appears original except for at the left side of the receiver’s chamber ring which has been sanded and then reblued.

Bore Condition: The bore is gray with light wear in the rifling. There is light erosion scattered throughout the bore.

Overall Condition: This pistol retains about 88% of its metal finish. There is pitting in the right-side rail, the bottom rear corner of the sideplate and on the left side of the barrel band with a sprinkling of pinprick surface erosion on the front strap, backstrap, trigger guard and the left side of the receiver. There is finish loss on the front edges of the barrel band and frame, and the edges of the frame rails and the left sideplate, with thinning on the edges of the stock lugs at the bottom of the backstrap. There is a small scratch on the right side of the receiver and a few very light handling marks in the surfaces. The knurling and serrations on the toggle knobs and the other small parts is sharp. The left grip screw is disfigured. The markings are clear. Overall, this pistol rates in about Very Good to Fine condition.

Mechanics: The action functions correctly. The receiver is tight to the frame. We did not fire this pistol. As with all used firearms, a thorough cleaning may be necessary to meet your maintenance standards.

Box, Paperwork & Accessories: This pistol comes with a single blued magazine with an aluminum bottom piece. The bottom piece is marked “7885 / o” and with an “Eagle / 63” Waffenamt indicating it was made by Mauser in about 1939. There are several small dings and scrape marks in the right side of the magazine and tiny dings in the edges of the grasping knobs on the sides of the bottom piece. The magazine is in about Very Good condition.

Our Assessment: The Luger pistol was patented in 1898 by Georg Luger and first produced in 1900 by DWM (Deutsche Waffen-und Munitionsfabriken). The Luger was selected by the Swiss army in 1900 well before the Germans finally adopted for their navy in 1904 and the army in 1908. The Luger was one of the most distinctive looking pistols ever made with its toggle-link action. It was known to be strong and reliable, and was made by a host of companies including Krieghoff, Simson, Mauser and Vickers. The Germans liked it so much they used it in both world wars, even after the Walther P38 officially replaced it. The pistols made by Krieghoff were mostly destined for the Luftwaffe or German Air Force, and are marked with an “Eagle / 2” Luftwaffe inspection mark on many of the parts. This pistol was made by Krieghoff in 1940. It has all the correct markings and matching part numbers, except that three of the numerals in the serial number on the left side of the receiver’s chamber ring are overstruck over other numbers. The magazine is also from a different weapon. Otherwise the finish appears original except for where the left side of the chamber ring was sanded and then refinished. The pistol is in about Very Good to Fine condition with 88% of its finish remaining. This is a very nice-looking pistol with straw colored small parts. Krieghoff Lugers were only made from about 1935 to 1943, with most of the remaining guns scarce, making them desirable collector items. The overall condition of the pistol is nice enough that a lot of collectors will bid on this just to add a Krieghoff to their collection.