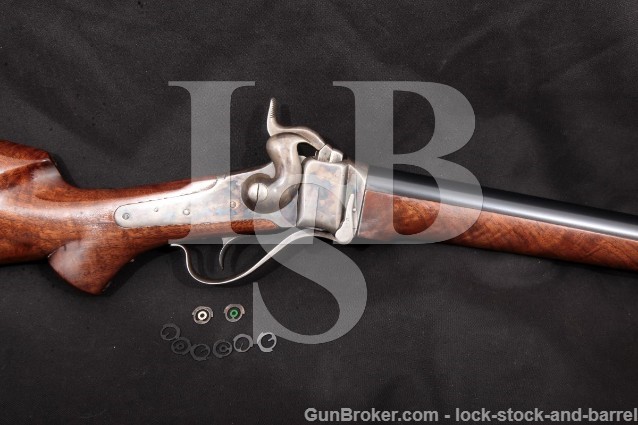 Sights / Optics: The front sight is a globe-type sight with level, dial adjustable for windage dovetailed to the front of the barrel. Multiple inserts for the front sight are included, five different aperture sizes and four different post sizes and shapes. All are in Excellent condition except for one of the aperture inserts which shows significant surface wear and has had the aperture painted green. The top tang is drilled and tapped to accept a peep sight (none provided).

Stock Configuration & Condition: The stocks are two piece walnut with a pistol grip, schnabel forend, raised comb and black solid rubber Decelerator buttpad. The forend has a bruise on the left at the bottom-rear corner and the buttstock has a very short, thin crack in the top of the wrist to the right of the top tang. Otherwise, there are only light handling marks. The LOP measures 14” from the front of the trigger to the back of the buttpad. The buttpad has little to no wear, in Excellent condition. The stocks are in about Fine overall condition as not original to the rifle.

Type of Finish: The barrel is blued and the receiver, hammer and lockplate are case colored.

Finish Originality: Barrel finish is Original, the receiver and other case-color parts have been refinished.

Overall Condition: This rifle retains about 95% of its metal finish. The barrel has only light handling marks. The receiver retains the great majority of its case-color with faint evidence of light pinprick erosion under the finish in some areas. The top tang has light wear from a previously installed peep sight. The receiver has a crack which extends from the seam at the lockplate almost all the way across the loading trough. The screw heads are sharp. The markings on the barrel are crisp, the markings on the receiver are shallow the point of being incomplete. Overall, this rifle rates in about Poor condition due to the crack but appears as Fine-Excellent.

Mechanics: The action functions correctly, though it is likely unsafe to fire with the cracked frame. We have not fired this rifle. As with all used firearms, a thorough cleaning may be necessary to meet your maintenance standards.

Box, Paperwork & Accessories: This rifle comes with the additional sight inserts as described.

Our Assessment: Sharps rifles and carbines were were purchased by the U.S. Army and Navy during the Civil War. The Sharps carbine was the most significantly utilized carbine of the Civil War. It was a single shot percussion breechloader using paper cartridge and revolutionized hand weaponry at the time. However, some years after the war’s end, the Army found that it had some 50,000 rifles and carbines in its inventory which had become obsolete as they were unable to fire newer self-contained cartridges. Arrangements were made to convert these rifle’s to fire self-contained cartridges so that they could continue use in the Army. Unfortunately for Sharps, they underestimated the cost of performing the conversions and didn’t realize this until the contracts were in place and the conversions were being performed. While the commandant of Springfield felt that they were justified in receiving additional compensation and the Chief of Ordnance agreed, the Secretary of War did not and no further compensation was provided. This would contribute to financial woes that Sharps would experience in later years. This rifle was built off of one of those converted receivers. The hammer was filled and re-profiled from one designed for a percussion cap, the nipple was removed and the breech block modified to accept a cam firing pin. The primer feed mechanism was removed and its channel in the side of the lockplate filled. A rather long time later, someone equipped this receiver with a massive 34″ bull barrel chambered in .50-90 and some nice walnut stocks. This rifle must have made one heck of a BPCR gun and perhaps it sill could. The crack in the receiver is worrisome, but a skilled gunsmith may be able to get this Antique back out in the field blowing smoke. Please see our photos and good luck!