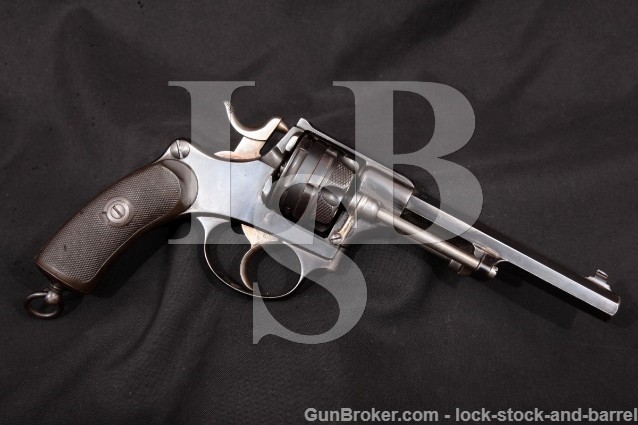 Stock Configuration & Condition: The grips are checkered brown hard rubber on an oval shaped saw handled grip frame with an integral oval grip cap. There is a stud with a lanyard ring attached in the middle of the grip cap. The left grip has a large smooth cross in the center, marked “3”, opposite the grip screw in the right grip. There is a surface chip missing from the grip immediately below the grip screw escutcheon in the right grip. Otherwise, the checkering shows light wear without mars. The grips rate in about Fine overall condition, not considering the small surface chip in the right side.

Type of Finish: The finish is blued. The trigger and hammer have a straw-colored finish and the ejector rod is “In The White”. The cylinder is knurled to assist in turning when loading and unloading.

Finish Originality: The finish appears to be an arsenal refinish.

Bore Condition: The bore is bright with sharp rifling. There is a hint of very light erosion at the muzzle.

Overall Condition: This handgun retains about 90% of its current metal finish. There is light erosion under the finish on the bottom and left lower shoulder of the barrel, and light wirewheel marks under the finish on the sides of the trigger guard and the left side of the frame. There is finish loss at the muzzle, and thinning on the edges of the barrel, cylinder and top strap. There are light handling marks scattered over the surfaces. The knurling on the ejector rod, cylinder and hammer show light wear without mars. The screw heads are sharp and the markings are clear. Overall, this handgun rates in about Fine condition as refinished.

Mechanics: The action functions correctly. The cylinder lockup shows a tiny amount of play. The double action pull is relatively smooth and the single action trigger is crisp. We did not fire this handgun. As with all used firearms, a thorough cleaning may be necessary to meet your maintenance requirements.

Our Assessment: The first modern Swiss Army revolver was the M1872 double action revolver similar to the French MAS 1873 Chamelot-Delvigne revolver and was chambered in a 10.4mm rimfire cartridge. In 1878, the Swiss came up with a new 10.4mm centerfire cartridge, and introduced it in the M1878 revolver, which was the first Swiss made revolver. Older M1872 revolvers were converted to centerfire as the M1872/78 model. This is a Swiss M1878 revolver that appears to have been arsenal refinished. Several of the parts, including the barrel and cylinder, are marked with what appear to be two different serial numbers, “3757” and “4587”.  Could one of the numbers be the original serial number and the 2nd number a “gun” number as issued by the Army? We expect the experts out there will know exactly what the numbers mean and bid accordingly. This revolver has about 90% of its current finish remaining, and the bore is bright with sharp rifling and just a hint of erosion. This is a very nice-looking revolver, and we are sure the Swiss collectors and collectors of early European service revolvers will be interested.

CA Legal or CA Private Party Transferable: This antique handgun can be sold/transferred in California.