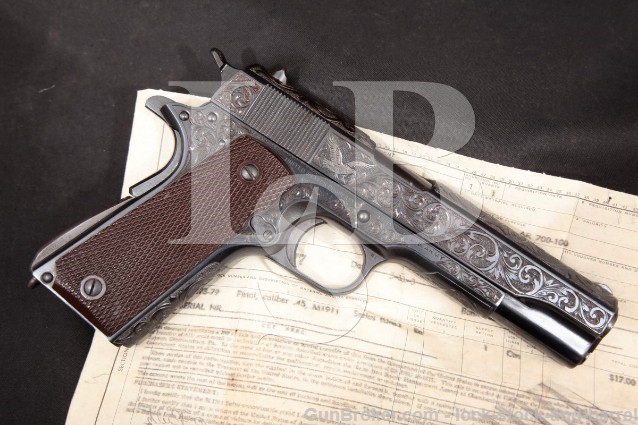 Stock Configuration & Condition: The grips are checkered reddish brown plastic. There are a few light handling marks in the smooth bottoms of the grips. The checkering shows light wear with areas of moderate wear in the left grip and a few tiny mars in both grips. The grips rate in about Fine overall condition.

Type of Finish: The pistol has a blued finish with a Parkerized and knurled mainspring housing. Except for the mainspring housing and the grip safety, the pistol is heavily scroll engraved, which includes an eagle on the right side of the slide.

Finish Originality: The finish on the mainspring housing is probably original, but the remainder of the finish is not.

Overall Condition: This pistol retains about 95% of its current metal finish. There are wear marks on the underside of the slide from rubbing on the frame and thinning at the front edge of the slide. There is surface loss on the tips of the knurling on the mainspring housing, which shows moderate wear. The slide serrations are sharp with a few tiny nicks. The knurling on the recoil spring plug and magazine release shows very light wear and the knurling on the hammer and the remainder of the small parts is sharp. The grip screws are sharp, the engraving is crisp and the markings are clear but shallow in spots. Overall, this pistol rates in about Fine condition as refinished. Please see our pictures to get a better idea of just how nice the engraving on this pistol looks.

Mechanics: The trigger pull is crisp. The slide is very tight to the frame. This pistol has manual and grip safeties, and this model does not have a magazine disconnect. The action functions correctly. We have not fired this pistol. As with all used firearms, a thorough cleaning may be necessary to meet your maintenance standards.

Box, Paperwork & Accessories: This pistol does not come with a magazine. The pistol does come with a form DD1149-4 showing that it was shipped by the National Rifle Association to 2ndLt. William C. Fults of the United States Marine Corp at Quantico, Virginia, for the princely sum of $17.00.

Our Assessment: The 1911 and 1911-A1 pistols served the military of the United States from 1911 to 1985, through two World Wars and the Korean and Vietnam wars. They gained a reputation as a reliable handgun with plenty of stopping power, and are held in high regard by those who have used them. In his book “Colt .45 Service Pistols”, Clawson indicates that despite a few problems with the slides when they first started production, United Switch and Signal produced high-quality pistols and did not experience the serious production difficulties that were encountered by Ithaca and Remington Rand. The ordnance Department reported that US & S pistols rated special commendation. Their finish was superior, and they consistently ranked high in tests for interchangeability of parts. All of the 55,000 pistols produced by US & S were made during 1943. This pistol has a slide from US & S, a frame from Colt, and a post WWII barrel by Colt. It was sold by the NRA to a 2nd Lt. in the Marine Corp for only $17.00. Unfortunately, the form documenting the sale is not dated, for we would love to know at what point you could buy a 1911A1 for that small amount. The pistol has been refinished with elaborate scroll engraving on everything but the grip safety and mainspring housing, so please see our pictures. The pistol is in about Fine condition with 95% of its current finish remaining. The bore is bright with sharp rifling. This pistol is probably not going to get much attention from the collectors, despite the fact that only 55,000 US&S pistols, and thus slides, were made. However, the elaborate engraving and bright bore will certainly appeal to the discriminating shooter who wants a pistol that looks as good as it shoots. Again, please see our pictures and good luck in your bidding.