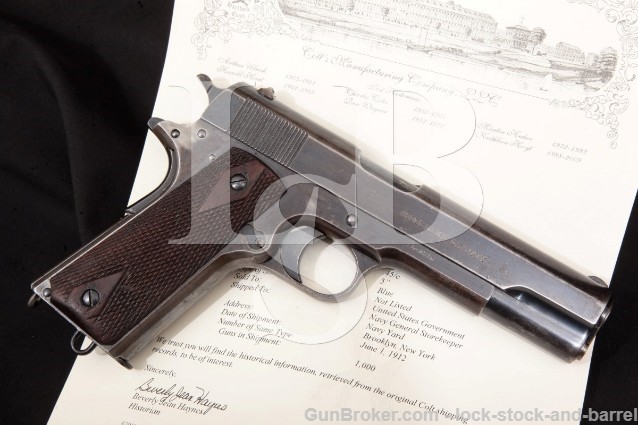 Type of Finish: This pistol has a high luster blued finish. This is the correct finish for a pre-war pistol.

Bore Condition: The bore is gray with moderate wear in the rifling. There is light to moderate erosion scattered throughout the bore.

Overall Condition: This pistol retains about 50% of its metal finish. There are a few spots of pitting at the right rear of the frame, with a spot of light erosion on the left side of the frame below the safety and other on the left side of the slide at the rear of the patent dates. There is finish loss with a plum colored patina forming in the mainspring housing, front strap, and trigger guard. There is finish loss on the edges of the slide and frame, and thinning in the remaining areas. There are multiple small handling marks scattered over the surfaces, with scratches in the left side of the frame below the slide release. The slide serrations are mostly sharp, with two tiny nicks on the right side. The knurling on the small parts is mostly sharp, with light wear on the recoil spring plug. The screw heads are sharp with minor screwdriver marks. The markings are crisp. Overall, this pistol rates in about Very Good condition.

Mechanics: The trigger pull is crisp and the slide is tight on the frame. The action functions correctly. We have not fired this pistol. As with all used firearms, a thorough cleaning may be necessary to meet your maintenance standards.

Box, Paperwork & Accessories: This pistol comes with one blued two-tone magazine with a lanyard ring on the bottom, which is the correct type for a WWI pistol. Furthermore, the top rear edge of the spine is cut square, without a keyhole, which is correct for the very early pistols, SN <4500. The magazine shows light wear with spots of very light surface frosting. The magazine is in about Fine condition. There is another lanyard ring on the bottom of the mainspring housing. The pistol also comes with a letter from the Colt Archive Historian documenting that this was one of 1000 pistols shipped to the Navy General Storekeeper at the Brooklyn Navy Yard on June 1, 1912.

Our Assessment: The 1911 and 1911-A1 pistols served the military of the United States from 1911 to 1985, through two World Wars and the Korean and Vietnam wars. They gained a reputation as a reliable handgun with plenty of stopping power, and are held in high regard by those who have used them. The U.S. Navy contract pistols with the early U.S. Navy marked slides and early style small lettering and serial numbers are probably one of the most difficult of the standard issue Model 1911s to acquire. There was a total of approximately 15,037 of these early style, U.S. Navy marked slides produced in total and this was changed (to standard U.S. Army markings) after 1915 as the Army, who was the Ordnance proponent for service pistols wanted standard markings and serial number placement throughout the Model 1911 production.  So, their survival rate in original unaltered condition is extremely low, since they were in service for the next 80 years. This is a Colt Model 1911 that was made in the first year of production, 1912, and was one of 2nd lot of 1000 shipped to the Navy General Storekeeper at the Brooklyn Navy Yard. The pistol has the correct inspection and proof marks and comes with a letter from the Colt Archive Historian documenting its pedigree. The barrel and magazine are of the correct type for a pistol with a SN less than 4500. The pistol is in about Very Good condition with 50% of its original bright blue metal finish remaining. This is a very early Colt 1911, and the Navy marked pistols were among the rarest. In addition, the early Type 1 magazine is extremely rare and very collectable. This pistol is destined for a high-end Colt collection.