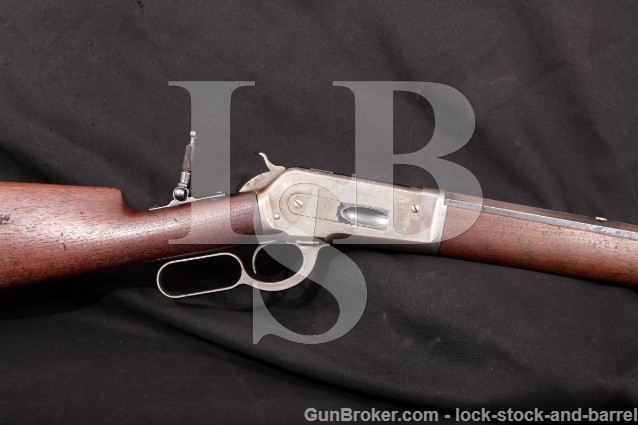 Barrel Length: The octagon barrel is 25 7/8” in length and measures 0.809“ flat-flat at the muzzle. (Winchester cut their barrels 1/8″ short of the advertised length, this barrel has not been cut)

Sights / Optics: The front sight is a blade with a white bead dovetailed into the barrel and secured with a set screw. The left side of the base is marked “LYMAN’S / PAT. OCT. 6. 85”. There is a dovetail at the rear of the barrel which is filled with a blank. The top tang has a folding diopter peep sight with a knurled collar which is used to adjust for elevation marked “PAT JAN 29/79”.

Stock Configuration & Condition: The stocks are two-piece smooth walnut with a straight grip, steel nosecap and steel crescent buttplate. The forend has a deep bruise on the left top edge which lines up with a mark on the barrel and a few scattered light compressions, bruises and drag-lines. The buttstock has a few scattered light bruises, compressions and drag lines with a concentration of more moderate compressions and marring on the right side toward the rear. The top of the wrist has a pair of small cracks coming back from the rear of the top tang at each side. There are no other cracks and no chips. The wood shifts from slightly proud to flush to shy where it meets the metal. The LOP measures 12 7/8” from the front of the trigger to the back of the buttplate. The buttplate has worn to white with some scattered small spots of discoloration from oxidation and a few scattered impact marks. The buttplate is in about Very Good-plus condition as Antique. The stocks are in about Good-plus condition as Antique and likely refinished.

Bore Condition: The bore is mostly bright with shallow but well defined rifling. There patches of very light erosion scattered through the bore.

Overall Condition: This rifle retains about 35% of its current metal finish. The finish is thinning at all edges. The barrel has finish in the flats which is mottled by wear, light frosting and scattered light marks. There is one slightly deeper mark on the left flat over the forend, lined up with a mark on the forend and another on the left edge of the top flat just in front of the receiver. Finish on the barrel is stronger in protected areas such as the bottom flats and around the rear sight dovetail and the front sight. The magazine tube has scattered wear with some light patina and a patch of what appears to be scrubbed-out surface erosion approimately 4″ in front of the forend. The forend cap has worn to white with scattered spots of discoloration from oxidation. The bolt retains strong finish with some light marks and a small void in the finish in the middle. The receiver has mostly worn to white with the figuring of the case-color still faintly visible in the flats and stronger case-color behind the hammer. The receiver has scattered light marks, frosting and freckling. The lever also has some faint case-color figuring in the flats with stronger case-color in the protected areas on the inside of the trigger guard and the portions concealed in the receiver when closed. The lever has scattered light freckling and frosting. The hammer has early-style knurling with light wear and a spot of marring in the center of the knurling. The screw heads are sharp except for the nosecap, loading gate and tang sight screws which are lightly disfigured with useable slots. The top tang screw which holds both the tang sight and the stock has very strong finish with a sharp slot, indicating it may be a replacement screw. The markings are clear despite being shallow as the early 1886 markings were. Overall, this rifle rates in about Fine condition as Antique.

Mechanics: The action functions correctly. The hammer has a half-cock safety postiion. We have not fired this rifle. As with all used firearms, a thorough cleaning may be necessary to meet your maintenance standards.

Our Assessment: Winchester’s first attempt at a lever action rifle capable of handling a rifle cartridge was the Model 1876, which was a heavier framed version of the Model 1873. However, the toggle-link action used in the gun was still limited to short cartridges like the .40-60 and .45-60 Win. The Model 1886 was made to handle longer cartridges like the .45-70 Govt., and the .45-90 Win. and .50-110 Win. cartridges. The Model 1886 utilized a locked-bolt action that was much strong than the M1876, and some seem to think it is faster and smoother as well. The Winchester Model 1886 was touted as a lever action express model, capable of handling any of the North American game animals. This rifle is a very early example, serial 586, and has early features such as the hammer knurling pattern, spring plunger lever-latch on the left of the lever and early style markings. The Lyman front sight with bone bead is described by Madis in “The Winchester Book” as an “optional feature which [is] not often seen”(P300) and the marking on the peep sight also corresponds to those found on “The majority of peep sights furnished with these Winchesters” (P305). With these original features on such an early rifle with original metal finish, we expect the Winchester collectors to be interested as well as collectors of early American lever action rifles.  Please see our photos and good luck!