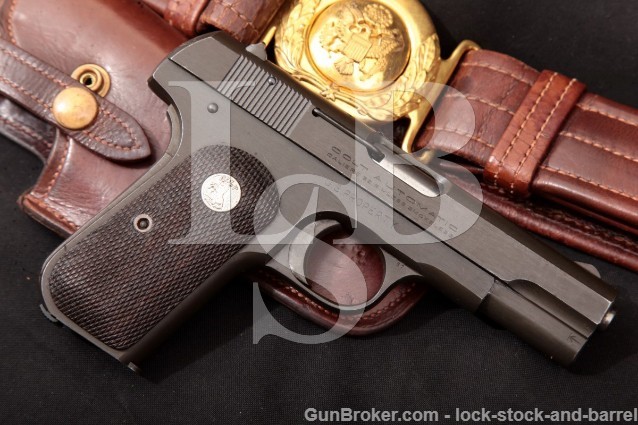 Year of Manufacture: Late 1944 (“Colt Pocket Hammerless Automatic Pistols” by John Brunner. Proofhouse gives a date of 1942, but this doesn’t match the factory orders as documented in the book.)

Stock Configuration & Condition: The grips are checkered walnut with nickel plated Rampant Colt medallions near the tops of the grips. The grips are dark with oil staining.  The checkering shows light to moderate uneven wear with a thin marred area at the top of the right grip. The grips are in about Very Good overall condition.

Overall Condition: This handgun retains about 94% of its metal finish. There is surface loss on the edges of the slide and thinning on the edges of the frame. There are light handling marks scattered over the slide with a few on the left side and rear face of the frame. The slide serrations and safety knurling are sharp. The markings are clear. A few of the patent dates and the ordnance mark are thin but the rampant Colt and the inspection mark on the right side of the trigger guard are crisp. The grip screw is sharp with light marks from a screwdriver. Overall, this handgun rates in about Fine condition.

Mechanics: The action functions correctly and the slide is tight to the frame. It has a grip safety, a manual safety and a magazine disconnect. The safety can be used to lock the slide back. We did not fire this handgun. As with all firearms, a thorough cleaning may be necessary to meet your maintenance standards.

Box, Paperwork & Accessories: This pistol comes with one blued 7 round magazine, a russet colored soft leather General Officer’s holster and matching belt. The magazine’s floorplate is marked “CAL. 32 / COLT”. The magazine shows minimal wear and is in about Excellent condition. The holster has a thumbstrap with a brass snap for securing the pistol, a belt loop riveted to the back of the holster, and the inside of the holster is lined with soft leather. The holster shows a few light handling marks. It is in about Fine Plus condition. The belt is a pre-1960’s style marked “HICKOK / 36” on the inside (Hickok made almost all of the pre-1960 GO holsters). It has a gold plated brass buckle with the U.S. Coat of Arms on it, three small leather straps on the inside for fastening the belt to a dress belt, and several snaps for adjusting the overall length of the belt. The belt shows a few scuff marks and compression marks. It is in about Fine overall condition.

Our Assessment: From Wikipedia: “The Colt Model 1903 Pocket Hammerless is a semi-automatic pistol designed by John Browning, and was the 1st of the Colt concealed hammer models, followed by the M1908 in .380 ACP. Despite the title ‘Hammerless’, the M1903 and M1908 pistols do have a hammer, which is covered and hidden from view under the rear of the slide. This allowed the weapon to be carried in and withdrawn from a pocket quickly and smoothly without snagging. These pistols were popular civilian firearms for much of their life, and also served as United States General Officer pistols from the 1940s until their replacement by the M15 General Officers pistol in the 1970s. The Office of Strategic Services issued the Model 1903 to its officers during World War II and it was a popular back-up/off-duty model with police officers in the United States. Gangsters also favored this pistol, including Bonnie Parker and John Dillinger.”. This is a Colt 1903 Type V Pocket Hammerless semi-auto made in late 1944 with a parkerized finish. The pistol is in Fine condition and the bore is bright with sharp rifling and no erosion. The M1903 pistols were not shipped in numerical order, which complicates trying to determine its original destination. The serial number falls in batches that were sent to Springfield Armory, the OSS, and the Military Intelligence Service. Of more significance, guns with serial numbers one higher and one lower than this pistol are known to have been issued to General Officers in 1955 and 1956, respectively, so it was unlikely this pistol was issued during WWII, but instead kept in storage for later use. This U. S. marked pistol, with its nice finish and complete with a GO holster and belt, makes a fantastic package for the discerning Colt collector.