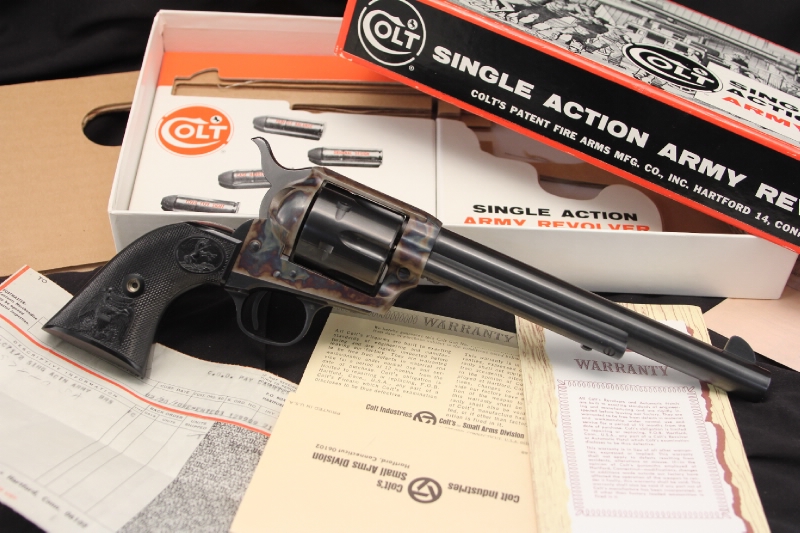 Make: Colt
Model: Single Action Army
Serial Number: 57880SA
Year of Manufacture: 1970
Caliber: .45 Colt
Action Type: Single Action Revolver
Markings: The left side of the barrel is marked “Colt Single Action Army .45”. The top of the barrel is stamped, “Colt’s P.T.F.A. Mfg. Co. Hartford, CT U.S.A.”. The left side of the frame is stamped “Pat. Sept. 19, 1871 / July 2, ’78 Jan. 19, 75”, followed by the rampant Colt logo. The serial number is found on the underside of the frame. The inside of the loading gate is marked “10”. The front and back grip straps are marked “57880SA” under the grips.
Barrel Length: 7 1/2″
Sights / Optics: This revolver is mounted with standard fixed front and rear sights.
Stock Configuration & Condition: The grips are two piece checkered hard rubber. The checkering is sharp and the panels show practically no wear. The grips rate in about Excellent overall condition and are both marked “880” on the insides.
Type of Finish: Blue & Case Color
Finish Originality: Factory Original
Bore Condition: The bore is bright and the rifling is sharp. There is no evidence of pitting or erosion.
Overall Condition: This revolver retains about 99% of its metal finish. The only wear is a faint drag line, otherwise, it looks new. The case color is vivid. The Screw heads are sharp. The markings are crisp. Overall, this revolver rates in about Excellent and ANIB condition.
Mechanics: The action functions correctly. We have not fired this revolver. The lockup and timing are about perfect.
Box, Paperwork & Accessories: This revolver comes in its original Stage Coach Box, with inserts, plastic bag, original Colt receipt (the gun was originally purchased by a Colt Employee), Warranty Pamphlet & card. The box is marked “7 ½ 45”. Not only is this the nicest SAA we have ever seen, it is the nicest box we have seen. The lid shows only light wear, otherwise the box and all accessories are clean and look mint. The corners are strong.
Our Assessment: At the beginning of World War II, Colt ceased production of the Single Action Army revolver to devote more time to filling orders for the war. When the war ended, no plans were made to revive the Single Action Army revolver as the design was seen as obsolete. However, with the advent of television and Western themed movies customer demand for Single Actions skyrocketed, so Colt resumed manufacture in 1956 with the Second Generation line of Single Action Army revolvers. The SAA is probably the most recognizable handgun in the world, and certainly one of the most important.
Second Generation SAA’s are considered the most well made of the SAAs, and are desired by serious shooters and collectors alike. This one will make both happy, though we selfishly ask that you take care of this revolver as well as the previous owner did. This is the best 2nd Gen. Colt SAA and box we have ever seen.